HEALTHY FOOD IN ABUNDANCE
August is a crucial month for harvesting in the gardeners calendar. There are so many edible vegetables and fruit available that it is impossible to eat your way through the crops, so friends and relatives all benefit and the freezer starts to get used in earnest.
Salad crops of lettuce, radish, tomato and spring onion have to be eaten fresh, but courgettes can be used either for immediate cooking or used for soup which can then be stored frozen.
Other crops of vegetables and fruit can have a very short shelf life so need to be prepared for freezing.
Vegetables
My summer cabbage Golden Acre may be an old variety, but it is very reliable and has been cropping for nearly two months with large, very tender, delicious heads. Caterpillar attacks were kept down by inspecting and picking off as soon as seen. Although they will soon be finished my winter cabbage Traviata, is heading up very well so I will try them out long before winter arrives.
Onions are now ready to ease up a wee bit with the garden fork to help them ripen in the late summer sunshine, if only it comes. They will get dried off and stored in a frost proof garage on wire trays. However they do lend themselves to roping up for storing in the garage.
Dwarf French Beans are now getting picked in abundance, then topped and tailed before blanching for the freezer. Those cooked immediately are extremely tender and delicious with a wee bit of butter melted over them.
My early salad potato Charlotte suffered from blight due to yet another wet year, (four in a row) so I am lifting all of them, and so far the crop has been excellent. Brilliant in salads, but they can boil away very quickly so keep an eye on them.
Fruit
My first early apple the Oslin, also known as the Arbroath Pippin is now ready. I do not grow too many of them as they do not keep and only last about two to three weeks on the tree, but they are delicious with a unique flavour. The growth is quite healthy and disease resisting, but there has been some brown rot on the fruit not helped by the wet weather. The Oslin was brought over to Arbroath Abbey by the cistercian monks in the 12th century and although they established extensive orchards as a food source and for cider production they have mostly all disappeared. 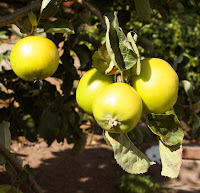 Scotland was once a major centre for top fruit production growing apples, pears and plums from Melrose in the borders, Clydebank in the west and Carse of Gowrie in the east. These served local markets for years with excellent tasty fruit, but major supermarkets required cheap produce with perfect unblemished skins and evenly sized fruit that can withstand bruising during the picking and cleaning processes and have a long shelve life within the store. Older varieties did not posses all these qualities so they have been passed by for other modern varieties, mainly from abroad that travel well and may look good on the shelf, but do not have the distinctive flavours of older varieties.
Other pressures on land for housing, roads, railway and other agricultural crops together with orchards getting older and little replanting of young trees resulted in the demise of the Carse of Gowrie as a top fruit growing area.
However there is an interest in going back to these older varieties to ensure they are not lost forever as they are perfect for Scottish gardens and smaller estates who may be well capable of picking them carefully and selling them locally in farmers shops and markets. If the price may not compete with the supermarket the flavours, aromas and taste will be well beyond anything they are currently stocking. In time as the price of oil increases, affecting transport costs, it may be economic to establish commercial top fruit orchards with varieties known to do well here but grown as a commercial undertaking. 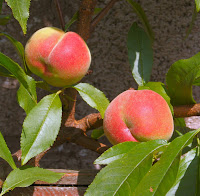 My young Peregrine peach tree grown on a south facing fence has now ripened the first of seven large fruits. The cold prolonged winter and late spring held back flowering so that frost was not a problem, but even so there was very few insects around to pollinate the flowers so hand pollination with my sable watercolour brush did the trick. Peach leaf curl disease has not appeared this year so the tree has excellent vigour.
It may not be a huge crop, but they will ripen on the tree with an intense flavour, and in Scotland it is quite a challenge to ripen them outdoors.
My saskatoon bushes have now all been picked. I cannot understand how last year I picked all the crop in one week, yet this year I have been picking for over four weeks. I will have enough in the freezer to last till next years crop.
Brown Turkey fig tree has started to yield a few ripe fruits which will continue for several weeks. A return to some summer weather would not go amiss to dry and sweeten them up, but the continual rain may tend to favour botrytis as they need to be left to ripen till they are quite dark and soft.
Raspberry Autumn Bliss has also started to crop. This mild wet weather is in their favour as the fruit is huge and sweet, but the canes are very tall at over six feet, and bramble Helen also favours the climate, but may do even better if the rain went off. We are not short of moisture in the ground this year, just a bit like the last three years.
The three year old goji plant continues to grow but there was no sign of any flower or fruit this year. As this is very new there are numerous gardeners all over the UK awaiting the first fruits. Sounds a bit like my new saskatoons, but hopefully 2011 will be the year.
Flowers
Gladioli and sweet peas are providing ample cut flower for the house and soon my spray chrysanthemums will be in full bloom as they are already showing a lot of colour.
Greenhouse
Tomato Alicante fully ripened on the plant is pure pleasure to eat in a salad and my Sweet One Million cherry toms just melt in your mouth. Alicante is a bit late, but now has very heavy crops that end up in the freezer to be used for tomato soup in winter. 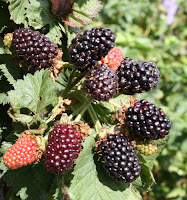 The damp air has resulted in a fair bit of blight rotting the foliage. This must be picked off before it spreads to other leaves and fruit, but to compensate for loss of leaves, very relevant as the lower leaves are removed as the cordon grows upwards, I allow some of the top sideshoots to grow. This ensures there is always enough green leaves to draw up the sap and feed the developing tomatoes.
Grape vine Flame is colouring up well so hopefully I will have a fully ripe bunch to display on my stand at the Dundee Flower and Food Festival in Camperdown Park which runs from Friday 3rd September to Sunday 5th September. As well as my Scottish grown saskatoon fruit bushes I will also be showing some outdoor grape vines suited to this location, now we have a wee bit of global warming in Scotland.
End
Posted by John Stoa at 18:34