ORNAMENTAL BERRIES
Beauty in the garden presents itself in numerous ways throughout the year. The impact of bold bright summer flowers is replaced in autumn with brilliant leaf colours as well as berries, fruit and hips. Most plants reproduce and spread by means of seed dispersal and have all developed amazing methods to ensure their success amongst the competition.
Plants need to ensure that their seed is spread well away from the parent plant so some have developed wings e.g. sycamores and maples, some have hooks such as sticky willie, and some open with an explosive power to shoot seeds good distances, e.g. brooms and gorse. 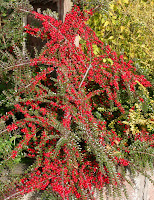 Chestnuts and oaks provide a food source for squirrels who collect the seed and dig holes in the ground to store them for the winter. There is always a good chance that some will survive the ravages from the hungry squirrel and grow into a tree.
The ornamental fruiting trees and shrubs started of as edible fruit for wildlife who travel away from the source eating the fruit on the journey and disperse fertilised seed in their droppings. Humans have played a role in dispersal of apple trees grown from seed along railway embankments as the apple cores were thrown out of the windows from older steam engine trains.
People have grown plants for eating for generations and realise that there is also a visual pleasure in seeing a tree or shrub in full crop with brightly coloured fruits.
Nurseries and plant breeders have taken this a stage further in developing new improved varieties and selecting the best clones to extend the available range of ornamental trees and shrubs with impressive displays of fruit.
Trees
When I was selecting suitable apple trees for my garden in Dundee I decided that they would need to be bright red as well as having excellent eating and storing qualities. Discovery is my early, Red Devil my main season and Fiesta and Red Falstaff my lates for storing, but while on the tree they all provide a fantastic display of bold colour.
Katy and Scrumptious are also very good.
However if a good display is more important than cropping potential try some of the ornamental crab apples such as Malus John Downie or Golden Hornet. After a while if you are tempted to use the fruit they will make an excellent jelly.
For those who are more patriotically Scottish a rowan tree will be high on the list. In past times they were necessary to ward off evil spirits, but old traditions die out and now they are grown in numerous forms for a very wide range of ornamental berries and autumn colour.
The common species, Sorbus aucuparia is grown all over Scotland and has eye catching scarlet foliage in autumn with a huge crop of scarlet berries which dont last too long as the birds just love them. The variety Sheerwater Seedling has been bred for its upright growth making a perfect tree avenue which does not interfere with traffic movement. 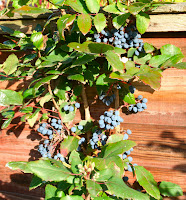 The yellow, pink and white berried rowans give a longer display as birds are not in a hurry to devour them like the red fruited types.
Joseph Rock has yellow berries amongst scarlet foliage, Sorbus cashmiriana has white berries and both Sorbus hupehensis and vilmorinii fruits start pink then slowly change to white tinged pink.
The genus Sorbus also includes the whitebeams which have broader grey leaves and scarlet berries which can last a long time. They make very impressive bold trees. The best ones are Sorbus aria lutescens and majestica where the grey summer foliage turns golden in autumn.
Berried Shrubs
Holly grows to a small tree size and is evergreen and will fruit in most years. It is very popular for a festive decoration around the home, is very easy to grow, but is not too fast.
Coming down the scale in size the Cotoneaster genus grows from a small tree such as C. frigidus to ground cover such as C. dammeri. They all get covered in bright red berries that last well into winter. The species C. horizontalis has a herring bone pattern that really excels when frosted. It is very useful for ground cover as is the variety Autumn Fire though it can be quite rampant. Cotoneaster simonsii is a very useful medium sized shrub for screening, but its prolific red berries get eaten and carried by birds all over the garden. It would seem that almost every seed wants to germinate and grow. This can be a problem.
Berries come in all colours from the white snowberry, Symphoricarpos albus, the violet purple Callicarpa bodinieri, the deep blue black Mahonia aquifolium to the bright orange sea buckthorn, Hippophae rhamnoides.
Sea buckthorn fruits are displayed on a silver grey feathery foliage that is great in maritime places as it tolerates sea spray and dry sandy soil conditions. It is a popular plant for vandal prone areas too, as it has a lot of thorns, and its strong root system and ability to sucker makes it useful to stabilise steep slopes and river banks. Breeders have been busy growing plants that can be easily harvested as the edible berries are very healthy once processed into juices and jams and essential oils are extracted from the seeds. It is also used in cosmetics and even in baby foods. The edible berries are very high in vitamin c,  but may have to be cooked in some recipe to get the best flavour from them.
Another excellent evergreen ground cover plant smothered in red, pink, lilac and white berries is the Pernettya. The berries last all winter until they get sweetened up for consumption by birds in late spring when there is precious little else for them to eat
The plants are female so you will need a male pollinator to ensure a good crop of large berries. You may have to order a male plant as they do not have sales potential in nurseries if there are no berries on them. Some species of male Pernettyas do however produce some berries as they may have a slight androgynous tendency.
It doesn't just happen to humans.
There is quite a bit of controversy as to whether the fruit is edible. For some native south American Indians Pernettya fruit was a major food source in summer and winter and different species were reported to have hallucinogenic chemicals or could make you intoxicated. The North Carolina State University studies reported the whole genus highly toxic and warned they may be fatal if eaten.
My local blackbird seems happy to gulp them down every late spring and always flies of in a straight line. He probably hasn't read the report. 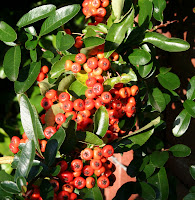 Skimmia has always been popular as an evergreen low growing shrub with red berries. It is also dioecious so you need a male pollinator for the berrying female plants.
Roses
It is the common practise to remove the seed heads after flowering to conserve the plants energy for flower production, but some rose types have very attractive large bright red hips.
Do not remove these hips as they will be the attraction well into winter. There are many varieties, but they mostly come from the two species, Rosa, rugosa and Rosa moysii.
Climbers
The Firethorn, Pyracantha comes in many varieties with red, orange and yellow berries. These are produced quite prolifically on tall thorny evergreen bushes which are usually treated by pruning to grow as a wall climber. Birds love the fruit, so although the display is short lived it is quite stunning for a few weeks.
The outdoor ornamental grape vine, Vitis vinifera Brant produces numerous small bunches of black sweet grapes. It is quite vigorous but is easily kept under control with pruning. It is best trained along wires on a south wall. Autumn colour of the large vine leaves is brilliant.
End
Posted by John Stoa at 17:25