RHODODENDRONS AND AZALEAS
The first rhododendron I came across was R. praecox growing in a large drift in a bed of pure leafmould. This was at Dawson Park in 1960 when the park was in its early years and was not much more than a playing field with a few interesting plants to relieve the boredom. I won’t ever forget my first two years apprenticeship training, digging drains all winter at Dawson.  The highlight of the year was when that rhododendron flowered and that only lasted a couple of weeks, but it must have made an impact on me as I have never been without my R. praecox. It is one of the first to flower usually in March or early April but only if there are no frosts to shrivel up the delicate mauve flowers.
The following year I was working at Camperdown Park where mature rhododendrons grew all over the place. Training trips in spring arranged for the apprentices by our tutor Walter Gilmore took us to Edinburgh Botanical Gardens and Crarae Gardens where both Rhodos and Azaleas are grown on a massive scale but to perfection. I was hooked for life. Parks training helped me understand the range from the tall varieties to the dwarf evergreens and the deciduous azaleas, and that first bed at Dawson growing in pure leafmould made me realise the importance of giving them the correct type of acidic soil. 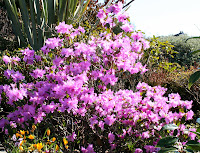 Today we do not have to go too far to see them in all their glory growing in natural surroundings covering the whole spring season. The gardens at Glendoick are now world famous as the place to visit to see hundreds of different rhodos, azaleas, camellias and numerous other woodland plants growing in a natural setting of a Scottish glen complete with a burn and waterfalls.
History
No article on rhododendrons and azaleas would be complete without some reference to the massive contribution made by several generations of the Cox family.

In the early nineteenth century the Cox family started a textile business in Lochee. This was consolidated by four Cox brothers in 1841 and the factory at Camperdown Works was reputed to be the biggest jute factory in the world employing 5000 people. Alfred Cox bought Glendoick House and estate in 1899. His son Euan, educated at Rugby and Cambridge, got a taste for the good life while working in London and had little enthusiasm to return to the jute business in Dundee.

A chance meeting in London with the plant explorer Reginald Farrer led Euan to join him in his first plant collecting expedition to Burma in 1919. The trip was a great success and many new rhododendrons and other plants were introduced. Euan loved to write about the new plants being introduced from all over the world and founded a bookshop in London. However this got bombed during the war and Euan returned to Scotland to help run the family jute business. He started to develop the gardens around Glendoick with his new seedlings from his expedition. He also subscribed to other expeditions and received many new plant introductions. A nursery was started with new plants acquired from other collections. Then his son Peter started to go on plant collecting expeditions to Turkey, India then China in 1981. The garden at Glendoick expanded up the burn.
The rhododendron nursery was established in 1953 and the garden centre in 1973. 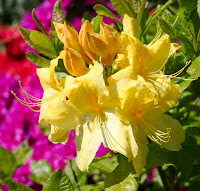 Peter’s son Kenneth has maintained the family traditions with 9 plant collecting expeditions and written many horticultural books. Peter and Kenneth have been breeding rhododendrons for over 50 years to produce plants suited to small gardens and the Scottish climate.
For the full and fascinating story of Glendoick, the Cox family, and their involvement with rhododendrons and plant exploration, check out the website at www.glendoick.com.
Types and varieties
Most Rhododendrons are evergreen but the Azaleas may be evergreen or deciduous. They come in all sizes from a few inches tall to small tree sizes given time. Many of the deciduous azaleas, eg A. luteum are scented. The flowering season normally runs from April to June, but changes due to weather pattern at the time, and there is always a few types that will flower early or later throughout the summer. R. praecox can flower in late March but the flowers are not frost hardy so can get wiped out in a bad year.
If you have a large garden you can indulge some of the taller growing varieties such as Cynthia, a vivid scarlet, Pink Pearl, or Horizon Monarch a yellow with red buds. 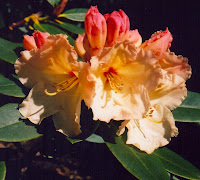 For smaller gardens try Nancy Evans, a deep yellow, or Elizabeth, a brilliant red that has been a favourite for years.
Azaleas tend to flower a bit later, but many have an exotic woodland scent and orange flowers such as Gibraltar. Klondyke is a brilliant yellow and there are numerous others in reds, pinks, mauves and white.
Dwarf evergreen azaleas (Japanese azaleas) may only grow a couple of feet or so after ten years, but they are perfect for mass planting for ground cover. They are also very easy to propagate from cuttings. Glendoick have bred numerous new varieties in colours including pink, purple, scarlet, white, orange and crimson.
Site soil and planting
Most Rhododendrons and azaleas flower better in full sun in Scotland as we don’t suffer too many very hot summers. They associate well as woodland fringe plants with a backdrop of birch, rowan, pine, spruce or if you wish a flowering tree choose a cherry or Eucryphia Rostrevor. However make sure they are not shaded by the canopy.
An acid soil is a must with all of these plants. Fortunately most soils in this area are naturally acidic, but may have been limed for previous crops. They like a free draining soil that can hold moisture. Soils can be improved by digging in plenty of leafmould, composted bark, garden compost, pine needles or peat. Acidity can be improved by using sulphur chips and a pre planting light dressing of sulphate of ammonia and sulphate of iron, but not after planting as they may scorch young leaves.
Plant rootballed plants in the dormant season, but containerised bushes can be planted at any time provided they are always kept moist. Do not plant deep and any mulch should only be quite shallow as the fine surface roots do not like getting buried.
Rhododendrons and azaleas do not need much feeding, so a light annual mulch will be quite enough.
Pests and diseases
Mildew may be a problem on a few varieties, (Elizabeth is prone) but can be controlled with a fungicide used for rose mildew.
Azalea leaf gall, exobasidium, can be a problem on the Japanese evergreen dwarf azaleas. Pick off and destroy any galls as soon as you see them.
Vine weevil adults cut notches around leaves and can girdle the stem just above ground level. They produce white grubs that eat the roots.
Lime induced chlorosis is only a problem where the soil is not acidic enough.
End
Posted by John Stoa at 14:03