THE GARDENING YEAR BEGINS
The garden ticks over quietly during the long winter months, but by mid February numerous wee jobs begin to crop up. After our very mild winter there is a temptation to get ahead of the game, as garden plants are taking full advantage of all the unseasonably mild spells. We could get caught out if a late frost occurs, but then if we hold back we could miss a golden opportunity.
I suppose it depends on how much you wish to gamble.
My sowing plans are determined by previous year’s experiences, though it is hard to remember what a normal year looks like. Soil conditions have been perfect as it is quite dry on the surface and early digging and leaving the soil rough over winter has allowed the soil to break down to a fine tilth very easily.
Outdoor jobs 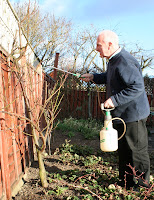 Compost was spread on borders in late autumn. This has allowed early flowering bulbs such as snowdrops, aconites and crocus to appear without any disturbance. Other flowers such as pulmonaria, anemone blanda, and narcissi are now beginning to appear.
Fruit tree pruning is now getting completed, though I am keeping a lot of shoots of apple and pear back for grafting as I now have some great varieties that I want to reuse.
Redcurrant bushes got their winter pruning taking all the young sideshoots back to spurs and tipping a few young main shoots which will replace a few older branches after fruiting. 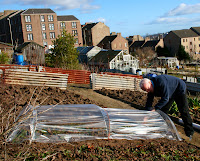 I keep two rows of early strawberry Mae, but to give a succession I put one row under tunnels to bring on an early crop. Strawberries need a winter chill period to ripen up fruiting crowns, but by mid February they should be ok and now milder weather is here a tunnel will hasten on the fruit.
My roll of polythene purchased over twenty years ago from LBS Polythene for strawberries is not yet finished. It has been excellent value, though appeared dear at the time.
Now is the time to give the peach tree its spray of Dithane fungicide to prevent peach leaf curl, which would destroy the leaves in spring and summer.
Indoor jobs
Tomatoes, broad beans and onion seeds can now be sown. I have a cold unheated greenhouse so the seed is sown in trays and kept under a table in the living room. As soon as germination appears they are brought onto a sunny windowsill in good light to keep them strong and short jointed. The tomatoes are grown in seed trays then pricked out into cellular trays, the beans are space sown individually in cellular trays, and the onions are sown in small clumps in cellular trays where they remain till planted out. Once germination is complete the onions and beans are put in the cold greenhouse to harden off, but the tomatoes are a wee bit more tender and stay in the warmth on a windowsill until the greenhouse warms up.
Check begonia tubers and if the buds are beginning to swell now is the time to box them up into compost and start them into growth. They are another plant that I start under a table in my studio where it is dark but warm. Once the young shoots start to grow they are brought into the light, then eventually taken to the greenhouse when the weather warms it up. Do not plant them deep, they just need enough compost cover to keep the whole corm moist.
Geranium cuttings taken in the autumn were rooted on a window sill, and then potted up in January. They are now putting on some growth so pinch out the tips to make them branch, but if they have good strong growth then use the pinch out shoots as cuttings to increase the stock.
They root very easily.
Sweet peas germinated a few weeks ago have now sent up shoots with a few leaves on. They are best pinched back to one or two leaves to encourage fresh young shoots to break from the base.
Busy Lizzy cuttings were taken in autumn and put into small jars of water where they will happily root. After a couple of months the rooted plants were potted up and are now in flower as an attractive house plant, though they are an excellent source of new cuttings to increase stock.
Plant of the week 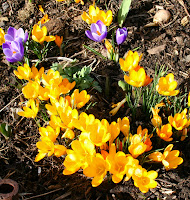 Crocus is one of the earliest flowers to create impact when planted in large drifts. They are very easy to grow and spread by seed and young bulbils. They are quite dazzling in mass displays. There are numerous species, though my favourites are Blue Pearl, Snow Bunting and Cream Beauty which flower about a week ahead of the larger flowering hybrids. Yellow Mammoth is the best for pure colour, but Joan of Arc (white), Pickwick (striped) and Flower Record (purple) are all very colourful especially when randomly mixed together.
Some species flower in autumn such as Crocus sativus which is used for the production of saffron by harvesting its red flower stigmas.
Crocus planted in tubs for early spring displays can be replanted in borders after flowering where they will continue to flower every year.
END
Posted by John Stoa at 20:48