PLANTING THE SUMMER FLOWERS
Now that the spring flowers have finished we can concentrate on planting the summer flowers in our tubs, pots, hanging baskets and borders. Summer bedding plants are a mixture of annuals, and perennials which we treat like annuals.
Alyssum, Lobelia, Petunias, salvias, Livingston Daisies, Star of the Veldt are sown each spring grown on, planted out then at the end of summer when they have finished flowering we dig them up and put them on the compost heap.
However there are quite a few perennials such as geraniums, Busy Lizzies, fuchsias and begonias which we can retain over winter to grow and flower again every summer.
Many of these plants are available quite cheaply from garden centres as small plug plants which are perfect for potting up into cellular trays, then growing on for a few weeks before planting out as bigger stronger plants.
Most of these will now be hardened off outdoors and be ready for planting. Many plants have been affected by the recent cold weather which held back growth a wee bit, and some may have been affected if you planted out too early as the cold spell in April extended well into May. However there is still plenty available so planting can now be completed in the hope that our unpredictable weather will not produce a late frost to catch us unawares.
Hanging baskets 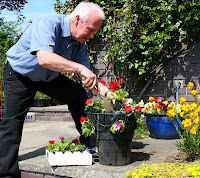 My baskets are lined with a cut to shape old compost bag with the black side on the outside. I don’t put in any drainage holes in the bottom as I cut slits for plants to grow in the side of the basket. As these grow they will hopefully cover the whole basket with foliage and flowers.  Petunias, trailing lobelia, Impatiens (Busy Lizzie) and the occasional geranium are my favourites for baskets, though I usually try to have at least one trailing fuchsia with Swingtime high on the list. This red and white double  never lets you down.
Tubs and pots 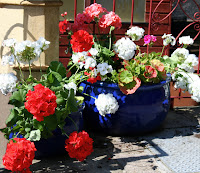 This year I am having geraniums as my main display supplemented with petunias and impatiens at the edges to trail over. I have kept my own selection of four geraniums for years as I have found the perfect red, cerise pink, salmon and white. I usually select the dark blue petunia for patios and near entrances as it has a gorgeous scent. I never understand why the seed producers don’t promote this scent in their blue petunias as it is the main reason why I always seek out this colour of petunia.
Lobelia is also an excellent blue flower that is more reliable if we get a poor summer as petunias really need plenty of sunny weather to produce their best show. French marigolds and Tagetes provide great yellow colours and if you need extra tall plants the African marigolds are hard to beat.
Sometimes I use the strongest of my tuberous begonias for the largest tubs as they can make a dazzling display of intense colour.
Flower beds and borders
However this year I am again keeping my begonias for the main large flower bed at the front of the house as last year they were brilliant and the weather did not give us the best summer. I will add a bit of height in the bed with a deep planting of about twenty mixed gladioli. They will not need staking as the deep planting will keep the stems upright and supported.
Other bare soil areas will be planted with Shirley poppies which were sown a few weeks ago in cellular trays. I have a few areas that are very sunny and a bit dry. These will be planted up with Star of the Veldt and Livingston daisies which both revel in hot sunny places.
Californian poppies and the double opium poppy Papaver somniferum have naturalised in a few areas of the garden and are allowed to grow and flower as long as they don’t spread too far. They have both appeared as windborne seeds, but as they are very colourful they have been allowed to spread in a few areas.
Plant of the week

Hardy Ice Plant Delosperma cooperi is a perennial mesembryanthemum with intense purple flowers in mid summer. It comes from South Africa where it is known as the Pink Carpet and Trailing Ice Plant. A yellow form Delosperma nubigenum, the yellow ice plant, flowers in early summer. These succulent ground cover plants need full sun and will grow in very dry soils. I planted one in the top of a seven foot high very dry south facing wall and gave it just enough water to keep it growing to get it established. It just loves it. Shoots of the yellow ice plant were stuck in cracks in the middle of the wall where they rooted and have now become established.
Delosperma naturally produce dimethyltryptamine, a hallucinogenic drug, but poses no problem to gardeners. The garden is full of plants that contain all sorts of poisons, but as most people are unaware of them we just grow them and enjoy the flowers.
END
Posted by John Stoa at 18:14