LAST OF THE SUMMER FLOWERS


LAST OF THE SUMMER FLOWERS

The prospect of an Indian summer was always high in our hopes to make up for an otherwise mediocre summer to put it mildly. However gales and floods were on the menu, so the sun lounger has now been stored away till 2013 which I am sure is bound to be a good year.
Garden plants however, do not give up so easily and will continue to push out some flowers at every opportunity. It is very pleasant to wander around the garden when that elusive sun nips out for the occasional half hour and just see what nature provides.

The weird weather has confused the garden plants just as much as humans. However we have papers and television to inform us what is going on. They get no guidance so expect the unusual.
Just like last year, my brilliant white Hellebores, (Christmas Rose) started to flower in September with green flowers, so looks like I have lost another year with this little beauty which normally sits outside my patio windows in full flower in the middle of winter.

Purple Delospermas are still in full flower even as we are now well beyond summer, when this succulent ground cover plant is at its best in a dry hot climate.
Oriental poppies and even my Delphiniums are having a second go at flowering, though both put on magnificent displays in early to mid summer.
Anemone Honorine Jobert just keeps on flowering, though the early flush at the end of summer was brilliant. They just keep going.
Fuchsia Mrs Popple can always be relied upon to flower till the first frosts appear. This year it has given us a lot of very tasty fruit to eat. If you have not tried it, give it a go. They are quite edible and different from other sweeter summer fruits.
Back on the allotment, one lady had a few onions run to seed. These were left to develop into huge purple balls of colour which Helen had cut to take to school to show her pupils how plants grow. 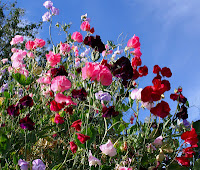 Roses gave a far better second flush than the first one which suffered the worst of the cold wet weather. They are now continuing to flower quite profusely, though black spot disease has decimated the foliage. Spraying this year has been impossible as frequent rain showers washes the spray off before it gets a chance to work. You really need to work with forecasted weather and hope that they have got it right if they indicated two or three dry days in a row.

Sweet peas on my allotment were ok, but the variety I chose for being highly scented did not have a good colour range. However my next door neighbour Lynn had an excellent show which I managed to get a good picture from. Sweet peas have been good this year. 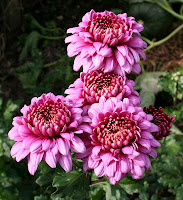 Early flowering chrysanthemums are only now beginning to flower. They should have started in August. I bought in a batch of spray varieties from Harold Walker Nurseries from Chester. They do not need disbudding so are quite labour saving, but it has taken them a long time to make some decent growth. The range was topped up with some lovely pink and purple sprays bought from a chrysanthemum grower at Gardening Scotland in June. His Regal Mist is a cracker. He had a huge display on his stand, but one, Barca Red was outstanding. It was the deepest rich purple I had ever seen, but when I tried to buy some plants there was none available. He imported the new variety from China and it is not to be marketed for another four years. However he didn’t like to see me so disappointed so he offered me a spare flowering spike. It was a gorgeous colour so I looked after it very carefully. The stem had been disbudded, but there was still some leaves on the stem that had not yet grown buds. Always keen to try my hand at propagating, so I took about ten leaf bud cuttings about two inches long and dropped them around some pots in compost. Every one rooted and most produced growth from the dormant buds. I am now waiting on them to give me some flowers, but I really do need that Indian summer. 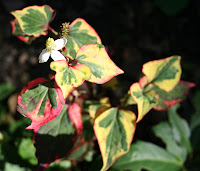 Houttuynia is a brightly coloured foliage plant growing about a foot tall. It is a herbaceous perennial that loves moist, even boggy soil and well placed around the edge of a pond. It will thrive in shade to full sun preferring clay soils which hold moisture. The species, H. cordata can become invasive but the variety Chameleon is less vigorous and makes a bright splash of colour.
It is easy to propagate by division.
It comes from Japan, Korea and China where it grows in moist shade.
In Vietnam the leaves are used as a vegetable, the Chinese cook and eat the roots and the Japanese use the foliage for a herbal tea tonic. The plant has featured for years in traditional Chinese medicine and now it extracts from the plant are being studied by scientists for use against numerous ailments.