HEALTHY LIVING FOR SUMMER
Summer always takes a long time to come, and then our Scottish climate only gives us a few sunny days at a time in between showers, so it is very important to make the best use of this period.
The garden and allotment have been cultivated and planted so we have had plenty exercise, and as crops begin to mature we can start to enjoy fresh fruit and vegetables picked and table ready in a few hours. As these crops have had no chemicals added to help them grow or increase their shelf life they could not be healthier.
Radish is so quick and easy to grow that they are nearly always the first of the new season’s crops to be picked. Many salads can be brought on early by sowing in cellular trays in a greenhouse or on a sunny windowsill then hardened off for transplanting in spring. Lettuce, spring onion and beetroot all lend themselves to this method. Other crops such as strawberries can planted under low polythene tunnels to ripen two to three weeks ahead of open ground crops. 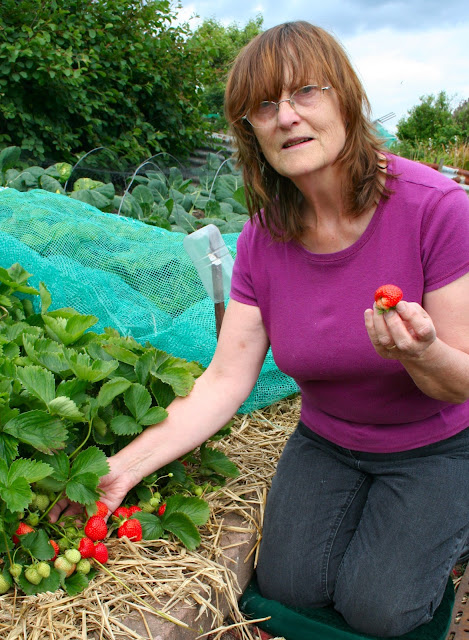 Some vegetables such as spring cabbage April sown in July 2012 and overwintered can now be cut as spring greens or left another couple of weeks to heart up.
Soft fruit such as raspberries, blackcurrants and gooseberries will soon be ready as will my cherries Cherokee though I will have to net them as the local blackbird would just love them for breakfast.
We are spoiled for choice for great fresh healthy fruit and vegetables from now till winter.
They all have merit as a health food product but differ in the levels of minerals, vitamins and antioxidants they possess.
Some of the best can reach superfood status and are also some of the easiest to grow. The following list is always on my allotment plot. I have covered the health benefits of these in depth last November, now archived in date order in my blog, the “Scottishartistandhisgarden.blogspot.co.uk”

Rhubarb is available from late winter as forced stems, then in season from April till autumn. Plant crowns in well manured rich soil about three feet apart and keep it well watered and fed in the growing season to harvest a wealth of stems. These can be used as fresh stems and any surplus frozen for winter use.

Beetroot, Kale, Swiss chard and spinach are leafy vegetables for stir frying, soups, and added to stews. Beetroot also makes an excellent deep red soup that is very nourishing as well as being very tasty. These vegetables are all very easy to grow from seed, and kale is one brassica less appealing to pigeons, caterpillars and clubroot.

Broad beans are my favourite bean mainly as they make fantastic soup as well as added to numerous other dishes. My first beans will be ready in July from a late February sowing, but I had spare seed left so I did another sowing at the end of May. There is always some crop that fails so these will be planted where a sowing of spring onions and Paris Silverskin pickling onions failed miserably. The latter like good soil plus a warmer climate than they have been getting lately so germination was very poor. My broad beans from the late sowing will crop at the end of summer.

Onions can just about be used with every cooked dish and now I have found a great variety they are very easy to grow. My onion Hytech grown from seed gives me a huge crop of large bulbs that store perfectly from the late summer harvest to May the following year.

Tomatoes need to be home grown. Sorry, but supermarket tomatoes just do not compare. A hard skinned tasteless watery orange ball is absolutely useless as a salad or cooking vegetable no matter how cheap, or on the vine or having a brilliant long life on a supermarket shelf. At home we can grow varieties for flavour and pick them fresh when they are red and fully ripe. These are delicious.

Black fruits include blackcurrants, blueberries, saskatoons and chokeberries. They are all very easy to grow except the blueberry which demands an acidic soil. They are all very high in vitamin C and antioxidants. Most can be eaten straight off the bush, though chokeberries are better cooked and sweetened. The new blackcurrant Big Ben is very large and has enhanced levels of sweetness and vitamin c. 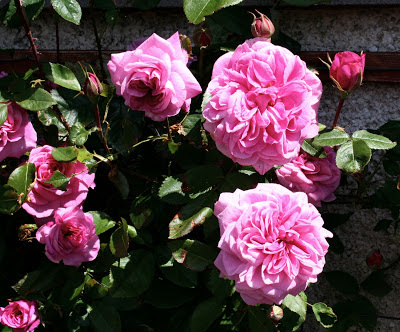 Rose Gertrude Jekyll has been my first rose to flower this year, appearing in early June, though much later than last year. It gets smothered in large pink Old English style flowers that retain the strong old rose scent. It can be grown as a wall climber or free standing shrub.