REVIEW OF SCOTTISH EXOTICS
Creating an attractive garden with flowers all year round and almost self sufficient in fruit and vegetables is expected when you have had intensive horticultural training and gardening has been in your blood since childhood. I have always experimented with new plants, so when the prospect of climate change promised to give Scotland a wee bit of global warming, you have to try out something new and maybe a wee bit exotic.
Saskatoon fruit growing may not be very exotic, and they had been growing at the James Hutton Institute for over forty years, but no-one had taken them to the next level. They needed promoting to let folk know they are edible, delicious, easy to grow, suitable for UK conditions and hopefully before long our garden centres will be stocking them. 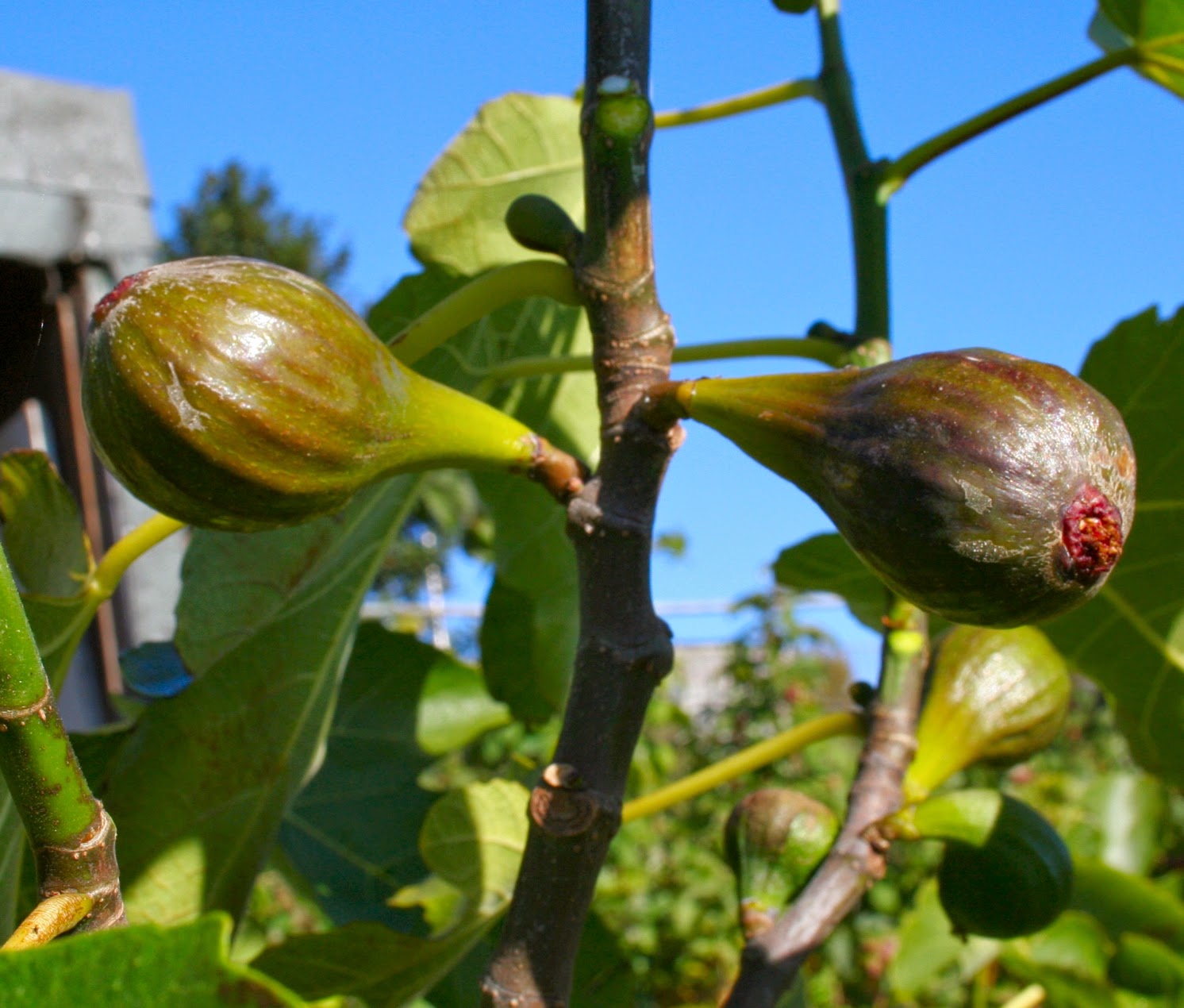 Chokeberries are also a novelty fruit needing a wee push as tasty health product. Although they may be just a wee bit astringent for eating fresh from the punnet, they make brilliant jam, compote, summer puddings and one of our favourite wines, now considered a health beverage.
We may not need a warmer climate for those, but as my garden is on a southern slope with some south facing walls it is perfect for trying out other Scottish exotics.
Peaches, figs, cherries, goji and outdoor grapes have all been planted and assessed to date.

Fig Brown Turkey is this year’s success story. I took a chance by leaving all last year’s unripe fruitlets on the bush, against normal good practise, as these will take up the plants energy, only to fall off in a cold winter. However we never got a cold winter and my figs survived and gave me a bumper crop of nearly eighty ripe fresh figs. They cropped over many weeks so most were consumed fresh, though some were lightly stewed to concentrate sweetness for a dessert.
Goji, however, was this year’s failure. I had waited about five years for the bush to flower. It had grown ten foot tall and I had to be pruned before it took over the garden. It never ever looked like it wanted to flower or fruit, then in spring it died, most likely from phytophthora root rot which my allotment now seems to be suffering from.
Outdoor peach Peregrine and cherry Cherokee both put on plenty of good growth and were covered in flowers, but there were very few pollinating bees around in spring so the flowers never got fertilised and just fell off. I got one peach and about ten cherries. Not a great success.
Outdoor grapes 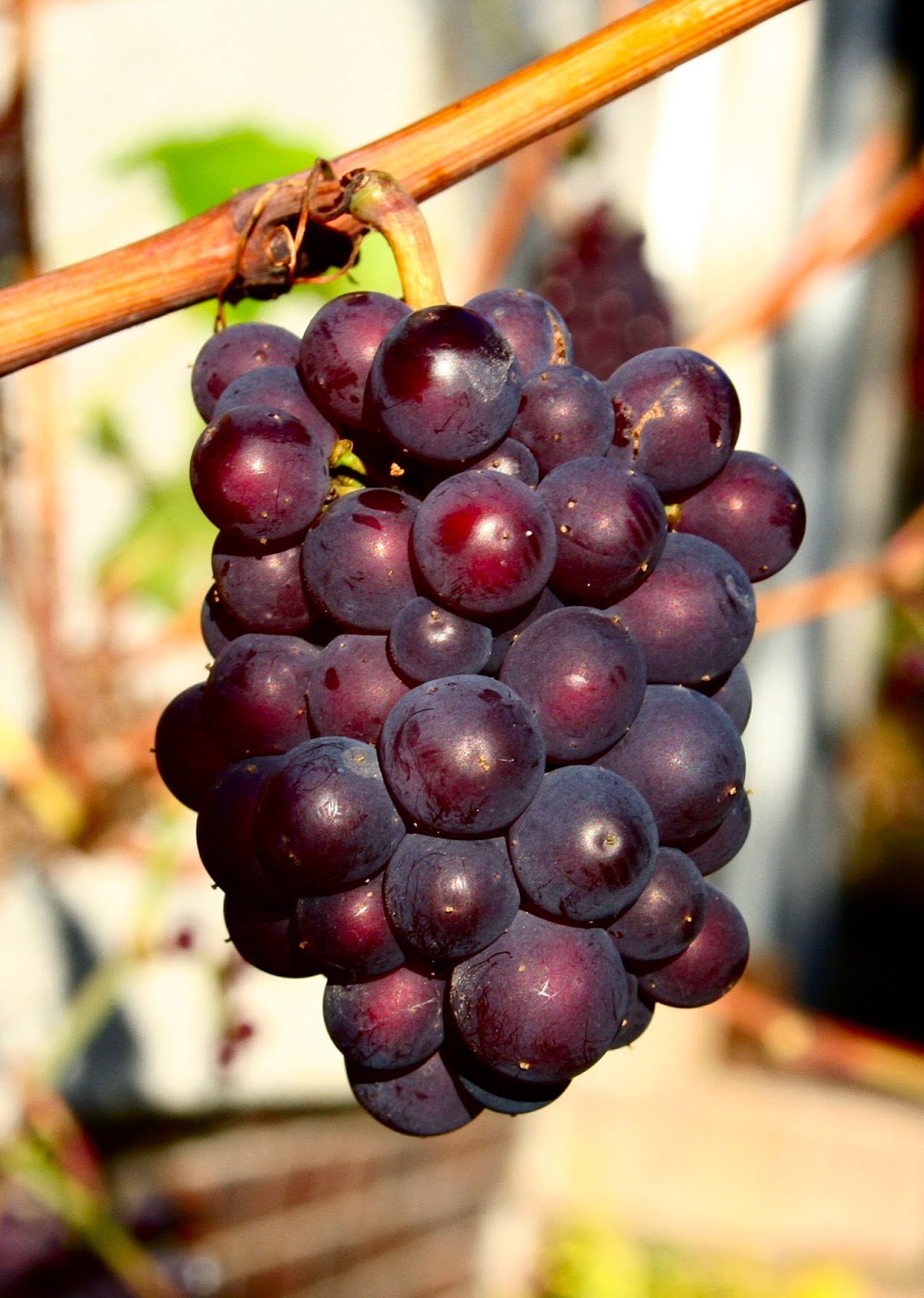 My outdoor grape trial continues to battle with problems. I have tried eight varieties all planted against south walls and fences, but lost one (Siegerrebe) to a red spider infestation from which it never recovered. Then Rondo which produced its first well ripened bunch last year died in spring. Regent grew for two years, produced several bunches this year, then died before these could ripen up. I think the phytophthora root rot may be the type that can infect a whole range of woody plants. I can see no other explanation for gradual deaths of so many plants. Muscat Bleu and Polo Muscat are both growing just fine, but have not yet flowered. Solaris is now about four years old and still to produce its first bunch. However, Phoenix, in its second year has produced masses of growth and three bunches which ripened up, though they were small and seedy. The Muscat flavour was terrific. 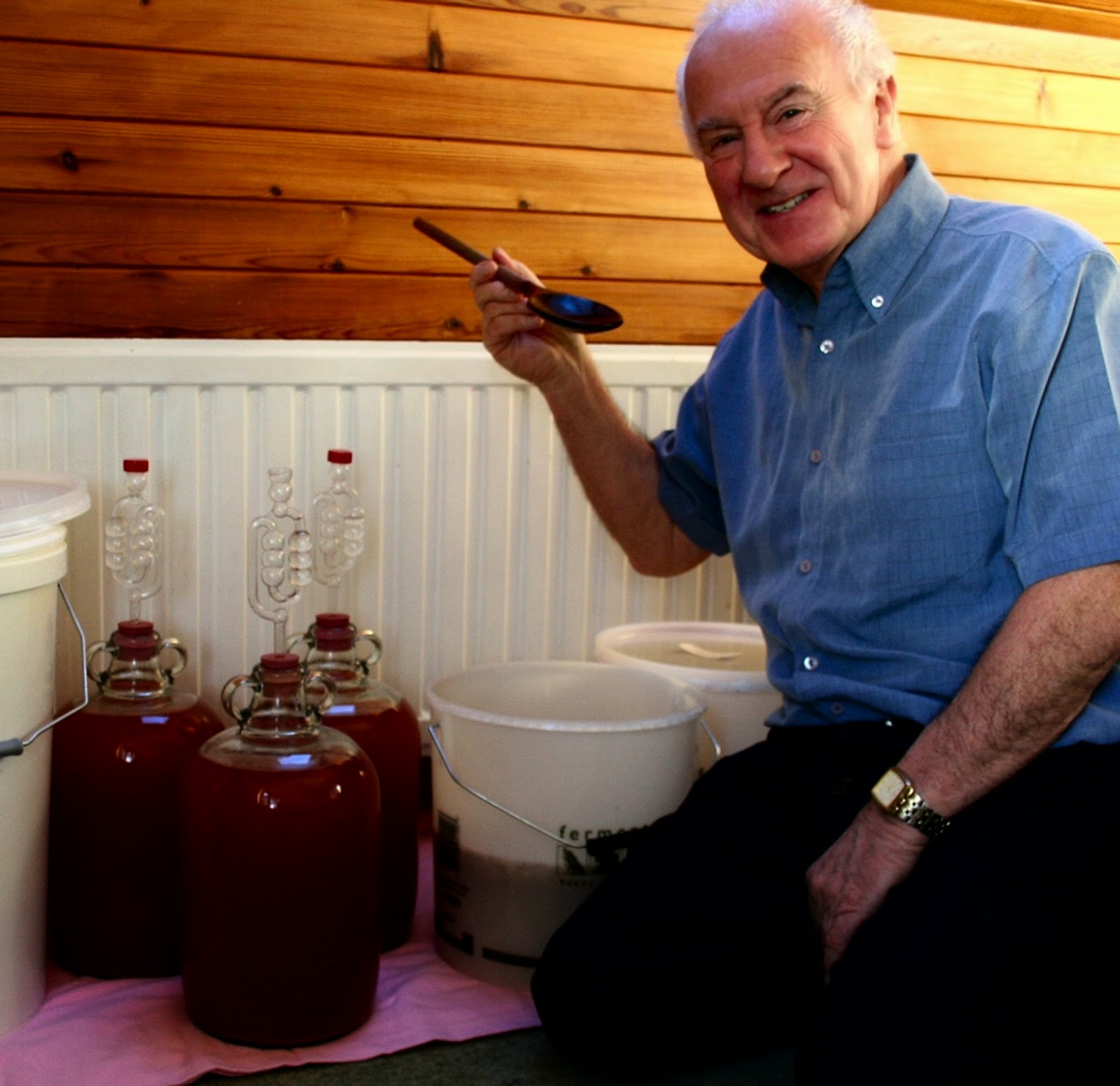 My ornamental grape Brant growing on a south facing wall gave me forty pounds of ripe sweet black grapes now fermenting peacefully in several demijohns, but scheduled for the first tasting at Christmas 2015. Its success gives you faith that we can grow grapes outdoors in Scotland, but they  need a warm sheltered spot with deep well drained soil, and the pruning has to be precise and constant to curtail excessive growth to allow sun onto the bunches, while retaining enough leaves to feed the swelling bunches. Although 2014 got a decent summer from spring till the end of July, the wet and cool August did the grapes no favours at all at a critical time.
Chris Trotter’s vineyard on the south slopes of Upper Largo in Fife had a similar result with Solaris not having its best year, though Rondo produced enough grapes for a small trial run. Chris feels 2015 will be the year for his first decent grape harvest from his 400 vines, though he has had to learn to adjust pruning to cope with Scottish conditions.
END
Posted by John Stoa at 10:35