We have waited a long time for some decent sunshine and a warm breeze that wasn’t blasting down from the north. Every year has its own climate that just seems to be different from all the past ones. Plants respond to both day length, temperature and rainfall, and this year we have to factor in continual strong winds that shrivelled up any soft leaves. The cool year has held back growth on most plants, which have then pushed their energy into fruiting and flowering. Daffodils kept flowering into early summer and tulips lasted for ages. So did my rhododendrons and azaleas, which put on a brilliant display lasting into early July. Most fruit crops are looking fantastic. 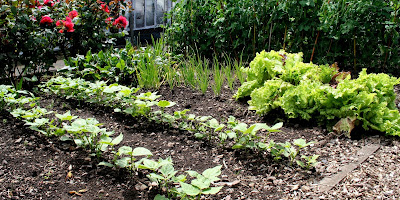 Fruit crops
Fruit trees are all laden down with heavy crops that will have to be thinned, as the June drop this month did not remove enough fruitlets from my apple trees. I needed to give them an extra fertiliser boost to help swell up the crop.
This year I have at least thirty fruits on my outdoor peach and although I have removed all infected leaves with peach leaf curl, the remaining growth is slow to recover. Time will tell how they develop in a few weeks time.
My cherry tree also got a heavy crop, but a lot of fruit never ripened and just fell off. The black fly infected all the terminal shoots which had to be cut back, but removing these tips is also a form of spur pruning so no harm done. 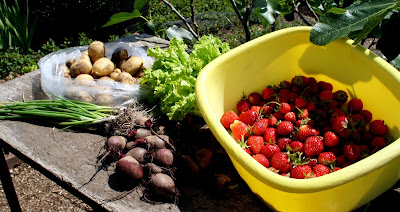 Outdoor grape vines are now all showing reasonable growth and Phoenix is just covered in numerous wee bunches of grapes. There is at least two bunches per shoot so some thinning out was needed. Summer pruning all strong growth continues to keep the vines under control.
My new blackcurrant Big Ben does seem to have larger fruit than other varieties and also ripens up a week or two earlier than Ben Conan, but bramble Reuben only grew two foot tall before the primocanes started to fruit. Similarly my new autumn raspberry Polka has only grown three feet tall before fruiting commenced, but that may not be a bad point.
My fig tree just seems to get better every year. Last year I got over eighty ripe figs as I never removed any figlets the previous year ahead of winter and these survived and produced a heavy crop. I did the same again for 2015 and now I hope to get over one hundred figs with the first ready in early August. 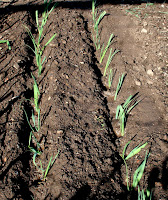 Cabbage, cauliflower, sprouts, root crops and salads all seem to enjoy the cooler summer but are now putting on some growth. Onions were very slow as they enjoy warmer weather, and as the dry weather prevailed all spring I had to keep them watered. This can bring on white rot, but thankfully not this year, and now they are growing vigorously in the summer heat.
Leek seedlings have spurted into growth so they have now all been transplanted.
Broad beans are not as tall as last year but the crop looks just as heavy. Dwarf French beans were sown in early May when the ground was really too cold, but germination was still very good and thinning had to be carried out to leave plants four to six inches apart.
Potatoes are also thriving in the cooler year and most are now flowering. I dug up a few shaws of my International Kidney as it is a real treat to sample the first your own home grown spuds.

Wee jobs to do this week
Keep removing the old flower heads from roses, poppies and other summer bedding plants growing in borders, tubs and hanging baskets.
Take cutting of Rosemary and Lavender as the shoots should now be mature and will root easy.
Wallflower seed sown a few weeks ago will now be ready to transplant into nursery rows to grow into bushy plants for autumn planting.