The red double herbaceous peony may be very common, but it does give a bright splash of colour in late spring and early summer to very many gardens. I grew up with this peony from childhood days as neighbours would happily give you a wee root for your garden. They always grew well and flowered within a couple of years then they would form a large clump over time. Growing a few feet tall and having a lot of foliage and large heavy flowers they always needed staking.
Looking for some more peonies on a trip to Gardening Scotland at Ingliston we soon found that there were quite a few growers of this plant showing many different varieties in white, pink, red and yellow colours. Anna could not resist the variety Doreen that was centre stage on one stand so she bought it immediately as it was an absolute cracker. 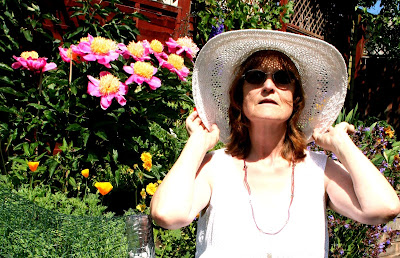 Back home it got planted with care in our herbaceous border, but it took a couple of years to build up its strength before putting on a brilliant show this year. Another variety a bit less common but really superb is the large flowered and scented pale pink Sarah Bernhardt. A well established large clump is very impressive. There are numerous varieties to choose from, but I would advise going to a peony or herbaceous specialist grower to guarantee you get what it says on the label. My first purchase of Sarah Bernhardt bought on holiday from a large west coast nursery/garden centre took two years to flower then turned out to be the common red. Unfortunately this is a very common problem in the nursery trade. There are just too many instances of incorrectly labelled plants as well as diseased plants that just should not be up for sale. My phytophthora root rot problem on my allotment started with infected Glen Ample raspberry canes purchased locally, then three years later they were replaced with more canes planted in a different spot. Again bought locally, but turned out to be Glen Rosa, not Ample.

Anyway back to peonies, once you have decided on which varieties to buy you can get them as bare root or containerised plants ready to plant in late autumn or spring. Choose a sunny location or one with only minimal shade. They are not fussy on type of soil growing happily on both sandy and clay soils as well as acid or alkaline, as long as drainage is good, but make sure it is fertile by adding plenty of well rotted compost worked into the soil.  Plant with the crowns just below the soil surface, then give a dressing of Growmore or other general fertiliser to give them a boost to help them get established. Although peonies can be tolerant of drought, it will not help establishment if growth is curtailed in dry spells in spring or summer so give them a mulch of compost in the first couple of years, but avoid covering the buds. 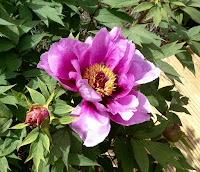 Once your clumps are well established you can propagate from them by dividing the clumps in autumn making sure each portion has at least three buds on a good fleshy root system, and replant as above with the buds only just covered with soil. Deep planting is often the problem for plants failing to flower properly.
Peonies are herbaceous perennials that die back to ground level in autumn, however the tree peony is a different form. It is a deciduous hardy shrub growing from four to ten feet tall.
The tree peony might be less common, but then it is more expensive and considered a bit more difficult to grow. Both types are relatively easy provided you plant them in a sunny sheltered spot in Scotland in fertile soil that holds moisture but is well drained. As the flowers are quite large and the bushes tall they are prone to damage by strong winds so shelter is essential together tying in to support the flowers.

Wee jobs to do this week
Start summer pruning of fruit trees and bushes. Once crops have been picked from currants and raspberries they can be pruned to allow the remaining parts more light and room to mature. Apples, pears, cherries and peaches grown as cordons, espaliers, stepovers or fan trained against walls and fences are all grown on a system to encourage spur formation and restrict growth. Cut back side shoots to about four leaves or so once new growth is no longer likely to form. This will be further pruned in winter to form a spur system.