LATE SUMMER IN THE GARDEN


LATE SUMMER IN THE GARDEN

For those of us still waiting for summer to arrive, we may be in for a wee disappointment as time is not on our side. The patio tables did not get used a great deal, but the garden plants varied tremendously. Plants preferring a cooler wet atmosphere such as fuchsias have never been better. Anna bought a new juicer machine to help use foliage of numerous vegetables such as beetroot that normally get discarded, and as an experiment I harvested a lot of fuchsia fruits from Mrs Popple to make a refreshing drink with a difference. Leafy vegetables had a great season, though slugs were a real nuisance. We needed some parsnips so I lifted three very luxuriant specimens. Roots were nearly two feet long, but they still have time to thicken up so could be another great crop.

My new raspberry Polka is living up to the description as being a lot bigger than Autumn Bliss, with plenty still to come. However some sun and warmth would help to make them sweeter.
However those plants that need a good sunny autumn such as my figs and grapes are still living in hope. I have had over a dozen large ripe figs, but there is still plenty to come. I got some nice grapes from the early varieties of Siegerrebe and Rondo, but my Black Hamburg in the greenhouse is very slow to ripen up.

Tomatoes just seem to like this weather as the crop is huge, so soups, salads, pasta sauce and pizza toppings are plentiful and surplus tomatoes are being frozen for future use.

Late summer is a good time to start tidying up herbaceous plants that have finished flowering, dead heading roses and lilies, pruning some shrubs, blackcurrants, gooseberries, summer raspberries and if you can get a couple of dry days do a bit of hoeing to kill weeds. Weed control has been very difficult this year up north as hoeing has been ineffective without the sun to shrivel up the weeds and the constant rain just washes off any glyphosate herbicide before it has time to be absorbed by the leaves. It has been a year for hand weeding and putting the weeds on the compost heap. 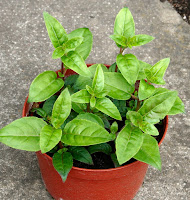 Late summer is a good time to propagate many shrubs by taking semi ripe shoot cuttings. Rosemary, Lavander, Cistus, Fuchsias, Forsythia, Ceanothus, Philadelphus and many others respond to this method. Take cutting about four to six inches long, cutting under a leaf joint with a very sharp knife and removing all the lower leaves. Dip them in hormone rooting powder, but shake off any loose dust and dibble them around the side of a pot in compost with added grit or sand to increase drainage. Place them in a warm but shaded spot in a cold frame or unheated greenhouse.
Keep them moist but not wet and they should root in a couple of months.

Apple, pear and plum harvesting
Start picking the first of the early apples. My first is always the Oslin (Arbroath Pippin) followed by Discovery. The crop this year is very heavy, but now Anna has a new juicer toy we are able to use all the Oslins. This very old variety of apple has a fantastic flavour, but suffers from brown rot very

easily, especially in this wet year. It is also a poor keeper so it has to be used within a week or so after picking. Pears are looking good but the crop is not heavy and we still await some sunshine to ripen up the fruit. I have no plums this year as I lost my old tree to silver leaf disease and my new replacement plum Victoria is just a baby trying to put on some growth. Maybe next year I will get a few plums.

Wee jobs to do this week
Most onions have now finished growing and once the tops have fallen over they can be lifted and put somewhere in the sun to dry off before storing in a dry frost free airy shed. They can be roped or cleaned up and stored in onion sacks.
Turn over compost heap to mix older compost with new material to help rotting down as the heap will soon be needed for the winter digging.
Do the final thinning of Swedes to about nine inches apart giving them room to grow before the end of the season.