SUMMER TUBS AND BASKETS
Summer may have been a long time coming, but the end of September went out in a blaze of colour responding to the dry, warm, sunny weather. The summer flowers should have been going over, but they are trying to make up for the lost season. Several petunias that had survived the cold summer put on a bold display as did the impatiens which has sulked all summer. However, now is the time to assess just how the summer flowers have performed. So before they get pulled out and added to the compost heap to be replaced with our spring flowering plants, take stock of the best plants and varieties to grow in 2016. 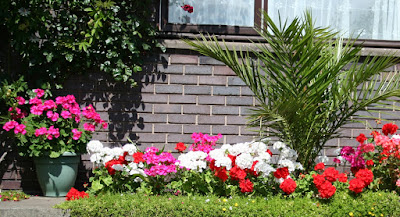 Geraniums and tuberous begonias have been my star attractions this year. Geraniums have been in flower from late spring till mid October and I am loath to remove them, but I have pansies, polyanthus, wallflowers and tulips all eager to get planted. Both red and white geraniums had a great year, but one tub with a mixture of cerise pink geraniums planted with shell pink impatiens and deep purple petunias were let down badly as the impatiens and petunias just did not grow this year, until the end of September. However every year is different so I will try out this combination next year hoping that the summer comes in a wee bit earlier. Dark blue and purple petunias can be very attractive in a good year and the blue petunia has the added bonus of a great scent. 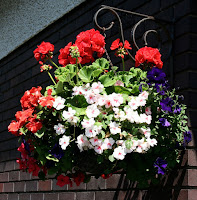 Begonias were a bit late in coming into flower, but then they put on a dazzling display. My red and orange varieties were particularly impressive so they will get prime locations next year as individual colours in each tub rather than mixed to increase the dramatic effect. My tubers must be approaching twenty years old, but they are very easy to keep over winter, and when they get too big I just cut them in half in spring when I can see the shoots begin to grow.
Both geraniums and impatiens will be propagated from autumn cuttings and grown indoors over winter. The impatiens makes an excellent flowering house plant, and can be in flower almost up till Christmas in a mild year. 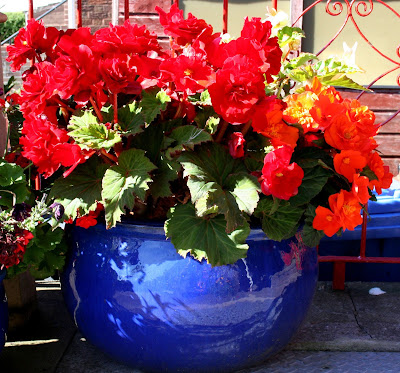 Fuchsias are another plant that just loved this cool sunless summer. Southern Belle is used in my hanging baskets by the entrance doorway, and Mrs Popple grows freely in borders established years ago. In a cold winter it may die back to ground level, but then in spring it bursts into life. It was a mass of flowers in mid summer, producing loads of ripe berries which we collected and put through the juicer for a tasty drink. It had a wee rest in early September, but by the end of the month with the late arrival of a week of summer weather brought out more flowers in a dramatic burst of colour.
African marigolds and annual calendulas provided the yellow garden colours, but they could have been better in a different year. Marigolds really need a hot dry sunny summer. I’ll think twice about growing them again next year. Cosmos grew from seed left in the ground from the previous year providing a nice splash of pinks and mauves against fresh green feathery foliage. 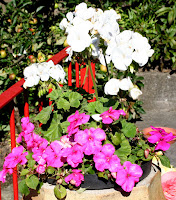 Lobelia is another dwarf annual that keeps appearing all around the garden and if it is not interfering with other plants we just let it grow to provide a deep blue relaxing colour.
Poppy Ladybird and Californian poppies also appear everywhere, but they can overwhelm the garden so we give them some space but don’t let them take over. Grown together the red and yellow flowers compliment each other.

Wee jobs around the garden

Once fruit bushes go dormant and lose their leaves they can be propagated easily with hardwood cuttings. Red, white and blackcurrants and gooseberries are all pretty foolproof. Take current years shoots about nine inches long and insert at least half of it into the soil outdoors having forked over the ground to loosen it up and aerate it. Prepare the cutting with a basal cut below a leaf joint and the other cut at the top above a bud. Space out about four inches apart and after rooting in spring grow on for the rest of the year. They will be ready for lifting and planting out the following winter.