Summer and autumn is the time when most flowering trees and shrubs produce fruit. Some of these we consume as fruit such as apples, pears, plums, raspberries, brambles and hazelnuts. Others we grow as ornamentals for the display of brightly coloured berries, though some fall into both camps.
I had an old dessert apple fruit tree that gave us some reasonable crops, but it was no great display so it got cut back and grafted with several apple varieties that were a bright red splash of colour such as Discovery and Red Devil. 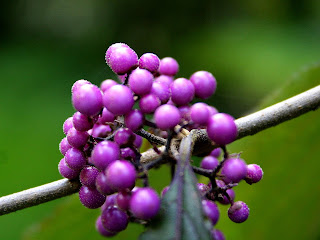 Similarly my huge climbing outdoor grape vine Brant has autumn colour and a lot of small bunches of black grapes in October. I leave these on till about the beginning of November, by which time the local blackbird has decided he fancies a few grapes for breakfast, lunch and tea. As these grapes are quite sweet and edible we have always used them, but when you collect over a hundred wee bunches, we eat a few but most get brewed into a couple of demijohns of wine. Another large climber that gets covered in orange or red berries is the firethorn, Pyracantha Orange Glow. It is very useful, as it is quite happy on a north wall and having ample vicious thorns it can be trained around any low windows to keep burglers at bay as it can be quite impenetrable. Bees love the flowers in mid summer and birds get the berries in winter.
The garden gets crowded at this time of year as the blackbirds, robins, bluetits and numerous others all fight and forage as they stake their claim to the feast of berries. 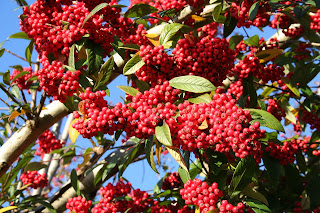 Berberis darwinii is one of the first to ripen up its black berries, and as this evergreen shrub can grow massive it provides several birds with enough food for several months. Berberis wilsoniae is a better garden plant as it is low growing, with good autumn colour and gets covered in coral pink berries in winter. Other good ground cover shrubs include the evergreen Pernettya with pink, red, white and mauve berries. However these plants come as female forms so will need a male plant for pollination. If you like deep lilac berries try a Callicarpa which is medium sized and its foliage turns pinkish in autumn. For a long display of white berries the snowberry is aptly named, and for orange berries the sea buckthorn is very attractive.
Elderberries are more often used in shelterbelts and windbreaks, but if you have room and wish to provide food and shelter for birds they will fit the bill. However if you also enjoy elderberry homebrew, the 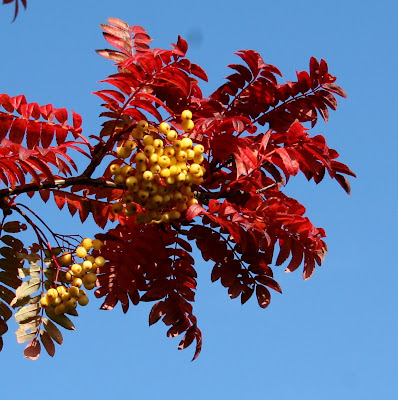 birds will have to find other berries, which fortunately are in plentiful supply.

The Cotoneasters range in size from ground cover to small trees, but all of them are prolific with their berries, most of which are red with some yellow varieties. Cotoneaster frigidus can be spectacular at this time of year and will keep several blackbirds fed well into winter, unless of course the flocks of waxwings and fieldfares coming in from Scandinavia find them.
Several small trees put on a great fruit display in late autumn especially the Malus John Downie and Golden Hornet, but it is the rowans that are essential in the Scottish garden. They are very versatile with brilliant autumn colour as the leaves turn a fiery red, and a range of berry colour from red, orange, pink, yellow to white.

Autumn is not too early to be drawing up a plan for 2016 for fruit and vegetable growing to incorporate a crop rotation to help prevent any build up of pests and diseases such as clubroot on brassicas and white rot on onions. The rotation plan will show where next year’s heavy feeders (peas, beans, courgettes, pumpkins, onions and leeks) are grown so that they get well manured or composted during the winter digging. Potatoes and brassicas get some compost but do not give any to the root crops as carrots, turnips, Swedes, parsnips and beetroot are likely to fork instead of growing as one swollen root. I also add well rotted compost to the bottom of my potato drill at planting as this boosts growth.