An attractive garden is usually a balance of areas of high input containing bedding plants replaced twice every year for a dramatic show of colour and other more tranquil areas that can still look great but without requiring a lot of maintenance time. This is where ground cover plants play an important role. It may be a shady border, or a dry area with poor soil, a wet patch or a large area in need of plants to create interest but that are easy to maintain. There are many plants that are attractive in appearance and dense enough to smother any weeds that dare to grow. Many ground cover plants can also allow some companion planting of bulbs to give an additional show at the same time as the ground cover plants or even at another time to give an additional display. A few of my favourites combine attractiveness of foliage, ability to put on a good show of flowers, and compact growth that prevents weeds from germinating or smothers those that made a start.
London Pride grows in an ever increasing drift with a dense canopy of leaves that weeds just can’t break through. It will grow on any soil in sun or shade producing a show of pink flowers in June. 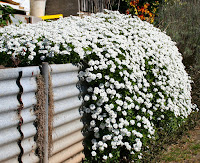 Delosperma nubigenum with masses of yellow daisy like flowers in June and its bigger brother Delosperma cooperi with purple flowers a month later are low growing succulents about three to six inches tall, that hug the ground as they grow, smothering all in their path. They prefer dry stony soils in full sun, and are brilliant hanging over walls. In fact it is easy to propagate bits by pulling off some shoots and pushing them into gaps in walls where they will root and grow.

Saxifrage comes in numerous varieties growing in dense clumps. They prefer well drained soil in a sunny spot and associate well with stones in a rockery or next to paths. They flower early in March and the red tulip Scarlet Baby is perfect alongside them and in a normal year they will both flower together.
Phlox subulata and Iberis sempervirons are low growing rock garden plants with pink, red and white flowers making a great display in May. They also love to scramble over walls and are a great companion to drifts of tulips growing nearby.
Red Oriental poppies and yellow Doronicum are herbaceous perennials with dense canopies of leaves and flower profusely in May, but then the foliage dies down in summer. Red tulips are great planted amongst the Doronicums with a show of contrasting colours.
Heathers, Euonymus fortunei, ivy and dwarf conifers are all evergreen plants useful for steep banks and shady corners all growing quite dense so no weeds can survive underneath them. They all have attractive foliage, and are very easy to grow. Heathers will all flower and some Callunas have foliage that turns bronze in winter after the first frosts.
Azaleas and dwarf rhododendrons are great for shady damp places as well as sunny spots giving masses of flowers from April to June depending on variety.
Nerine bowdenii, the Guernsey Lily forms a dense clump of bulbs that slowly multiply, and then as the leaves die down at the end of summer the pink flowers appear and put on a great show.
Aconites and grape hyacinths are also bulbous plants growing in dense drifts, though foliage cover is short lived as they die down in early summer, but if you underplant them with tulips and Oriental lilies you can extend the display from spring into summer.

Leeks sown outdoors in good soil in April should now be ready to lift and transplant. They like fertile soil to achieve a good size with thick necks. I have mine in land that had plenty of compost incorporated last year, then a green manure crop of tares sown down. This was dug in a couple of months ago so it could rot down ahead of transplanting. Rake the soil level after treading to firm it up, and then draw out a shallow furrow and dibble holes in about four to six inches apart. Lift the leek seedlings, discard any small ones, then after topping and tailing drop them into the holes and water in. Space rows about a foot apart. Musselburgh is still hard to beat.