GREAT APPLES FOR TAYSIDE
The climate and soils around Tayside have always been ideal for growing apples, plums and pears and for hundreds of years the Carse of Gowrie was an established fruit growing region. This was at a time when travel was not so well organised and growers mainly supplied local markets. Each area would grow its own range of varieties suited to its own conditions of soil and climate. We had the Lass O’ Gowrie, Bloody Ploughman and Tower of Glamis, and the Oslin, the Arbroath Pippin was grown in Arbroath.
Perth and Kinross Countryside Trust commissioned a survey carried out by Andrew Lear to establish the number and condition of the old Carse of Gowrie orchards and to recommend what can be done to preserve, restore or utilise them. Andrew also runs many workshops on apple pruning, growing and grafting, with information on the workshops as well as the orchard survey on his website at  www.plantsandapples.co.uk
The old  heritage varieties are now making a comeback as people begin to realise these older varieties were not lost due to poor flavour, sweetness or juiciness, but because they could not withstand the commercial needs of supermarket produce. Commercially apples get fairly rough treatment before they arrive on the supermarket shelf and any that bruise, do not have a long shelf life, have a few skin blemishes, or do not make an even size grade will get rejected. 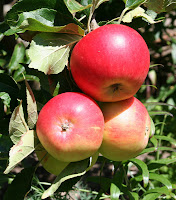 Unless you buy Cox, most other varieties will have a tough skin and pretty poor flavour, but they will be a good even size and look great in a display.
You will need to look out for the smaller greengrocer who can buy locally to get a truly flavoursome apple, or grow your own. Every garden should have at least one apple tree.
When buying an apple tree for the garden, do not assume that just because it is available in your local garden centre it is suitable for this area. I have seen many varieties available that just should not be offered to customers for Tayside gardens. We are just too far north for a good Cox or a Golden Delicious.
Suitable varieties for Tayside
Many years ago SCRI established a museum collection of apple varieties from all over the world to evaluate them for commercial production in Scotland. The National collection is now held in Kent at Brogdale where conditions are more favourable for commercial apple production. However many of these varieties still exist in the hands of a few apple enthusiasts such as Willie Duncan who worked at SCRI and frequently appears at apple festivals giving advice on growing and varieties.
Willie grows well over one hundred different varieties in his small orchard in Fife as well as every other fruit possible. This is an important asset for Scotland that must not be lost. Willie’s apples are a major contribution to the autumn apple festival at Glendoick garden centre.
Early varieties start off with Discovery, a bright red sweet and juicy apple. It has good vigour and strong healthy foliage which resists disease. Even earlier is the Oslin, ripening at the end of August but hard to find. Both these apples will not store so must be eaten as you pick them.
Mid season varieties include Scrumptious, (red), Limelight, (yellow), and Red Falstaff, all which may be stored for several weeks in a dark, airy, cool shed.
Later varieties such as Fiesta and Red Devil are better after a few weeks in store and are good keepers.
Bramley is the best cooker and an excellent keeper.
If you have an existing apple tree of a poor variety it is not difficult to change the variety to one or more other types by grafting new shoots onto it in early spring. This sounds very specialised, but is amazingly simple.
Grafting an old apple tree
My first grafting came about as I was teaching my young daughters how to grow apples from seed. To every ones surprise they got about a dozen little plants from two apple cores. Naturally father had to plant these out on his allotment and my daughters were expecting a crop very soon. Realising it could take about fifteen years for the plants to mature before they started to fruit I thought I would short circuit the process by grafting some existing varieties onto the young seedlings. I got hold of a few shoots of Cox, (I lived in England at the time), Golden Delicious, and Worcester Pearmain and did my first whip and tongue grafting. Every one grew as did my cherry varieties grafted onto a seedling that appeared in my leafmold heap.

A few years ago I decided to change a large James Grieve tree, which did not impress me, with a range of more suitable varieties by top working. Every graft took, even the side grafting experiment worked a treat. I would strongly advice the brave to have a go on a limb or two from any old tree.
Grafting method.
In winter saw any branches to be grafted to leave about one to two foot long stubs between one to four inches diameter. These will be shortened further at grafting time in spring so the cut is fresh and clean.  If you are cutting back a whole tree leave a couple of limbs to draw up the sap in spring for grafting. They can be cut out or grafted the following year. 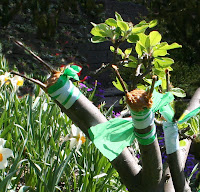 Collect some one year old shoots, (pencil thickness) of new varieties to be used as grafts while still dormant and heal them into a cold moist, but well drained shady border to keep them dormant for as long as possible.
Grafting only works when the sap starts to rise as it lubricates the inside of the bark allowing it to lift without tearing. When the tree starts to flower in April the sap will be rising and grafting can start.
Saw back the limb to leave a fresh cut and trim the edges with a sharp knife to leave it clean. Make sure your knife, (a pen knife is ok), is very sharp and clean. A one inch wide stem will take one graft, but a four inch stem can take three or four grafts. If they all grow, they will need to be pruned after a few years so only one branch is left and the others removed or spurred back.
Make a cut into the bark about two inches long and flick the end at the top to lift the bark edges to allow insertion of the scion shoot. 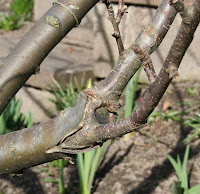 The shoot (scion) for grafting should be about three to four buds long. Make a long slanting cut at the lower end about two inches long opposite a bud and trim the scion to three or four buds. Insert the scion into the prepared cut on the stem and push it down so that the end of the cut is just showing.
Tie the graft firmly with strips of polythene tape or cut from a plastic shopping bag.
Seal all cut surfaces with grafting wax to prevent disease entry or drying out.
Once the shoots grow the tape can be removed in mid to late summer.
The new shoots will fruit within two years from grafting, and there is no limit on how many different varieties you can grow on one tree.
You can always start off by having a go on one branch and when it grows you will be more confident to tackle others.
End
Posted by John Stoa at 13:48