SPRING AT LAST
The end of February and early March brought a very welcome period of sunshine and dry weather not seen since last October. The urge to get outdoors into the garden was very strong especially as there is a mountainous backlog of tasks seeking attention. The long lasting blanket of snow which fell in November and December but did eventually melt a couple of months later was followed by cold wet real dreich weather that put any thoughts of gardening on the back burner.
That was yesterday and now today the sun is shining, the ground is drying up and gardening can begin at full speed.
Complete the winter pruning
The warmth of the sun has been sufficient to start the sap rising on my fruit trees as buds begin to swell, so pruning had to be completed before dormancy breaks. However if you have any tree which is showing too much vigour at the expense of fruiting delay pruning till just after bud burst as the shock will help it to reverse that trend.

I do not spur prune my fruit trees, but carry out a minimum of replacement pruning to remove some old wood and encourage a balance of young wood and mature fruiting wood which will fruit for several years before it gets replaced.
Apples, pears, my peach tree and my newly planted cherry tree Cherokee all got pruned. I will grow the cherry as a fan trained dwarf tree against a south facing fence, so the strong main shoot got cut back to two feet and side shoots shortened by a third. Two shoots growing at the front and back got spurred as they are unwanted in a fan trained shape.
Although I love my very early Arbroath Pippin apples, they do not keep, and as you can only eat so many, I will cut some branches back to stumps and graft some new varieties onto them in late March to early April.
I will also replace most of my Comice pear with other stronger disease resistant varieties which don’t get wiped out with scab in our wet summers. Grafting is very easy and rewarding as the new grafts grow on the older tree very readily as long as a few basic principles are followed. One main principle is that the new shoot, called the scion, should be dormant when grafting, but the tree has to be growing with the sap flowing to lubricate the inside of the bark so it separates easy from the trunk without tearing. I cut my scions in February to early March then heal them in a north facing cool border to hold them back. It always seems to work just fine.

I will cover grafting next week, so if you wish to make a family tree or try out another variety get your scions ready now.
Good apples in our area are Fiesta, Red Falstaff, Scrumptious, Discovery and Red Devil.
Summer and autumn raspberries, black, red and white currants, brambles and gooseberries should all be pruned before growth starts.
I will be doing my first pruning of my six year old Saskatoon bushes to open up the centres allowing more light in and encourage some younger shoots to grow from the base.
My ornamental exotic Cordyline australis did not survive the winter to it got chopped down to ground level. I will leave it for a year or two to see if it regrows from the base.
The fruit garden
Last week I removed a lot of runners from my early strawberry variety Mae to make two new rows. As there was plenty runners I complete each row as a double row at six inches apart and the runners spaced at six inches. This will increase the cropping significantly.

To get even earlier crops I put a polythene tunnel over an existing row of Mae. This will fruit two weeks ahead of the others. It is easy to make your own tunnels very cheaply and they can last for years. My tunnels are made from 4 foot wide polythene (150 gauge) held over wire hoops (high tensile 8 gauge galvanised wire) and secured with polypropylene binder twine.  The wire hoops are about 5 feet long. Allow a 9 inch leg to insert into the ground then bend the wire round a broom handle to create a loop on the outside for tying the twine to. I dig the polythene into the ground at each end of the row to secure it, the tie it down with the binder twine at each hoop spaced about 3 feet apart along the row.
You can buy the materials online at www.lbsgardenwarehouse.co.uk
This is the last chance to spray your peach tree with a copper fungicide, or Dithane to control peach leaf curl which can devastate the tree if untreated.
Early vegetables 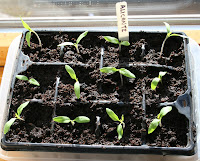 Tomato Alicante and my favourite cherry type Sweet Million germinated successfully so have now been pricked out into cellular trays. They are to grow for a few weeks on the south facing living room window sill until warmer weather arrives and I can transfer them to my cold greenhouse. They will then get potted up again before planting into growbags.
Broad beans have now been sown as one seed per cell in a cellular seed tray. These are kept at home in the warmth under a table to germinate, and then they will be transferred to the cold greenhouse. They are pretty tough hardy plants so the cooler regime will not harm them. They will be one of the first to move out of the greenhouse together with my geraniums to make way for other plants. Geraniums are also quite hardy and can take a degree of frost, as long as they have been hardened off properly and the frost is not severe or prolonged.
Back on the allotment low polythene tunnels are perfect for an early batch of lettuce, radish and spring onions, but put it in place on prepared soil for at least one week to warm up the soil. There is nothing to beat those early first salads, picked fresh and onto the plate within hours.
The first flowers 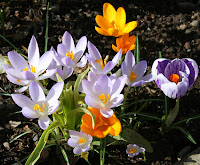 Those first few days of bright sunshine was perfect to open up the spring flowering crocus to add to the aconites, snowdrops and my dazzling white hellebore.
My winter border of coloured stemmed shrubs, (Cornus Westonbirt, Kerria japonica, Salix britzensis and the Japanese maple Acer Sangokaku) has been flooded with drifts of crocus and snowdrops. It is an amazing site at present at its best for the season. The show of coloured winter stems will remain effective for another couple of weeks before they get pruned down to the base.
Under my carpet of crocus in this border I have planted tulips for flowering in May and scented lilies which flower in mid summer.
I am hoping that we do not suffer any late frosts as my first flowering shrub, Rhododendron praecox is beginning to open up. This lilac early dwarf Rhododendron is spectacular for at least two weeks provided it does not get frosted.
End
Posted by John Stoa at 19:20