EXOTIC FRUIT
I am constantly amazed at just how far life has changed in my short lifetime. My grandfather had spent a lot of his childhood in India as his father was in the British army posted abroad. I had always loved fresh fruit, but that was mostly an apple or a pear if you felt like going upmarket. He really missed his guavas and mangoes. There was not many of them around Dundee at that time, though they were starting to appear on supermarket shelves in tins. However as a kid I did get spoiled a wee bit when he produced these exotic fruits called bananas. Now that was special, then later in life my older sister discovered pomegranates and went in for them in a big way.
My path in life was being determined for me. After a spell as a gardener, then learning the value of experimentation with new crops while at the Scottish Crops Research Institute, followed by a period working on commercial fruit farms, I developed a strong interest in fruits to grow and eat.
Raspberries, strawberries and blackcurrants were easy, and delicious, but common. An apple tree was a must have plant, but getting the right variety for this area took a bit of research. Similarly pears and plums got purchased just as soon as I had a big enough garden. In these early times my exotic tastes only embraced a slight venture into the less common, such as blueberries, gooseberries, brambles and red currants.
Nowadays cheap travel, television and the internet have opened our eyes and taste buds to the huge range of exotic fruit to sample and where ever our climate and soils are favourable we can try growing them.
Gardening is about having a bit of fun, trying the unusual in the hope for a bit of success, and if it doesn’t work, then move onto another plant worthy of a trial.
Over the years, I have tried figs, peaches, outdoor grapes and autumn raspberries and strawberries and now it is the turn of cherries, saskatoons, aronias and goji.
Some fruit has been tried but discarded as the fruit was just not very pleasant, such as Lingonberries and Cranberries.
Let us look at some of the better ones.
Grapes

These have always been considered a greenhouse plant in Scotland with Black Hamburg being the most popular and successful variety. It is very easy to grow provided you keep it pruned properly throughout its growing period. It does not need any heat so is perfect for the cold greenhouse, but make sure you give it plenty ventilation to prevent any build up of mildew or botrytis. The grapes are large, sweet, juicy and picking continues from September till December, but they do have pips in them. If you prefer a seedless grape try the variety Flame which has red grapes, is very sweet and although the grape is smaller than Black Hamburg, the bunches are bigger. Another seedless variety is Perlette, a white grape. The vine is quite vigorous so keep it well pruned.
I had hoped that global warming would have given the Scots a warmer climate so I can try some outdoor grapes, but all we seem to get is a lot of warm rain all summer. I have tried several grapes outdoors, but with no success so far. After five years they get grubbed out.
However I don’t give up too easily, so this year I am planting the outdoor variety Solaris against a south facing fence.
I grow the ornamental variety Brant on my south facing house wall. It is very successful with a regular one hundred bunches every year. They are small, but the black grapes are very sweet and juicy. These get used for a delicious sweet grape juice for immediate use or it can be frozen.
Figs
This is another plant that really needs a warm spot to ripen its fruits, so a south facing location is advisable. It can grow large so is best planted in a prepared pit lined with slabs to restrict root growth. It will then concentrate on producing fruit. Brown Turkey is the usual variety. There may be a bit of botrytis if the summer is very wet, as the fig prefers a hot dry ripening period.
Peaches 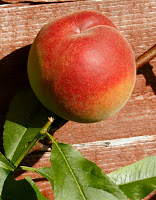 Another plant for the south wall as it needs a lot of sun and warmth to ripen up the fruits. Our last two hard winters are good for the peach as it has delayed the normally very early flowers, thus they are less liable to get caught by a late frost. They need hand pollination with a sable brush, and two sprays of fungicide to control peach leaf curl. Summer pruning helps to remove excessive foliage and allow the sun onto the fruits. I grow the variety Peregrine very successfully, so far.
Cherries and Goji
These can grow very well in Scotland, but it is too soon to report on them. My Goji is in its third year, so may fruit this year. My cherry is the variety Cherokee grafted onto a new very dwarfing rootstock called Gisela 5 which I will train as a fan on a south facing fence.
Saskatoons 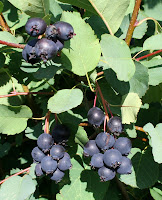 I have been growing these now for seven years and the Scottish Crops Research Institute has had them for about forty years so it is well established that they can grow very well in our climate. They will grow in almost any soil. The fruit is very similar to a blueberry but the Saskatoon grows faster and crops a lot heavier. The black berries which are very high in antioxidants, are ready in July, and can be eaten fresh or used for jams, pies, compote, summer puddings, or even used for wine making. Although relatively unknown in the UK, their popularity is spreading and ten years from now they will be as common as the blueberry.
Chokeberry
This is said to be the healthiest plant on the planet because of the extremely high levels of antioxidants in the fresh fruit. However it is a bit astringent if eaten raw, so the fruit is best used in jams, compote, pies and smoothies. It just loves the Scottish climate, so there are several growers already growing them in this area. They are not troubled by any pests or diseases and our soils seem to suit them perfectly. They can be grown as a single bush or even as a hedge.
Autumn fruiting raspberries and strawberries

Raspberries and strawberries may not really be exotic, but by growing them early and late it is pure bliss to get that first strawberry in May, then keep enjoying the perpetual varieties that fruit up to October. Autumn rasps are also a luxury that is well worth the effort.
End
Posted by John Stoa at 23:20