TUBEROUS BEGONIAS
Tuberous begonias are one of the most reliable summer bedding plants, providing a wealth of large blooms in any weather in just about any colour except blue. They are perfect for bedding, tubs, window boxes, hanging baskets and as a house plant on a sunny window sill. They are also used extensively by exhibitors at gardening and flower shows.
The flowers are usually double and can be frilled and some have a beautiful picotee edge.
Once you have grasped their basic cultural needs for growing and storage they will last for years. I purchased my tubers about fifteen years ago and at the end of each season I have more than I started with as the tubers grow larger. Protect them from frost at all times as they are half hardy.
It is usual to use different varieties suitable for summer bedding (doubles, Non Stop, Frilled, Picotees), those with a trailing habit for baskets (pendulas), and those with large bright flowers for showing (expensive upright doubles). You can pay up to £30 for one tuber of the best variety, whereas tubers for bedding are about £1 to £6 each. They may be expensive to start off with, but they last for years and slowly increase in size.
Early training in Begonias

Away back in the mists of time when the Dundee Parks Dept had numerous apprentices, (here we go again) we were trained to grow begonias to exhibition standards. Our head gardener at Duntrune Terrace training gardens grew them for exhibition at the Dundee flower Show. It was absolutely essential, we were told, to line the inside of the clay pots with fresh cow manure. Apparently only fresh manure would stick to the pots, not to mention the apprentice’s hands. So a wee trip to the countryside was arranged for some unsuspecting young gardeners early in the morning before our ten o’clock tea break. We never forgot how to grow exhibition begonias.
However the begonias were terrific all summer and I needed to get my hands on some for my own garden. An apprentice’s pay does not stretch to the purchase of tubers which at that time cost a fortune, but I could afford a packet of seeds from the country’s specialist grower of begonias, Blackmore and Langdon from Bath. These arrived one January, were sown immediately according to our resident head gardener and I subsequently obtained a small crop of about fifty tuberous begonias. These all flowered that summer and the tubers lasted for years.
History 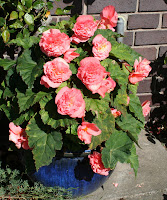 Plant collectors brought back the first begonia species from Bolivia and Peru in the nineteenth century, but these plants only produced a few small flowers on tall plants. Breeders starting crossing the species, selecting the best plants and slowly over time the begonia began to improve. At the beginning of the twentieth century a partnership of two amateur growers got together and formed Blackmore and Langdon of Bath. They produced hundreds of seedlings to sell to other nurserymen. They also exhibited successfully in London and have continued hybridising begonias ever since.
Propagation
Although cuttings can be taken and root fairly easily, the plant does not produce many sideshoots for cuttings nor are there many initial shoots on the sprouting tuber to take. It is also possible to split the tuber in April when emerging shoots are quite prominent. You need at least one or two shoots on each piece, but this is a very slow way to bulk up stock.
Seed sowing is the best way to produce a lot of plants quickly.
Sow in January to February on finely prepared seed compost. Do not cover the seeds as they need light to germinate, but to retain a moist atmosphere cover the seed tray with glass. Turn this over daily to remove condensation. . They must always be moist, but never wet and need a constant temperature of 65 to 70 F. to germinate. Always water by immersion from the bottom. The seed is very small and the seedlings are equally small, so when big enough to transplant you will need to make a forked stick to lift them out together with a very small dibber. Do not handle seedlings with your fingers. Plant them in trays about 4cms apart and once they fill those, transplant them again into larger containers. Young seedlings are quite tender and may be damaged by strong sunlight, so shade for a few months till they get a bit hardier. They should be big enough to plant out in June.
Culture 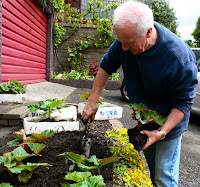 Dry tubers are started into growth by placing them close together, concave side up in shallow trays of compost in January or February. Cover them with compost but not too deep. They need a temperature of at least 65 F. Once the sprouts begin to grow and need more space, replant them into larger boxes or pots. Keep them watered and fed. Harden off by mid May and they should be ready for planting at the end of May or early June.
I plant out my begonias in beds at about a foot apart as my mature tubers now grow into quite large plants. They do not need staking, but if you are growing for exhibition you will need stakes as the large flowers are quite heavy.
The plant produces one main large male flower together with two smaller female flowers at the end of each flowering shoot. The smaller female flowers only need to be removed for exhibition. It is not necessary to remove them in a flower bed or tub. They are gross feeders in tubs, pots and baskets and need constant watering, but will reward you with a fantastic show of colour right up till the autumn.
Storing
At the end of the flowering season, about mid October, cut back the plants to about three or four inches and lift them carefully. Knock off any loose soil and store them in an airy dry cool but frost proof place. Let the soil around the tubers dry out and fall off. Store them in boxes concave side up covering them with the dried out soil or old potting compost. Make sure it is fairly dry.
Keep checking them to make sure they are still dry but firm.
Some time in late February the buds will begin to grow, so then it is time to start them back into life.
End
Posted by John Stoa at 23:33