POTTERING AROUND
Writing a gardening article ten days in advance of publication has its disadvantages. After surviving a really bad winter which killed out many plants, the garden readjusted itself as good growing weather prevailed for a couple of months. Seed sowing, planting, soil preparations and weeding were all back on schedule and I even had time to test the sun lounger. Everything was going so well that it was well worthy of a good gardening article, “Perfect Weather for Gardening”
Fate had other ideas and I now know how Michael Fish felt. The day before my article appeared the gales arrived and blew half the garden away. Good job this is Dundee, as no-one took me to task on my perfect gardening weather. Trees were blown down, my hanging baskets blew off the walls, plum trees lost half their branches, and the end of my greenhouse exploded as the winds bent the structure. Courgettes and pumpkins outside to harden off got blown out of their pots, delphiniums were flattened and any plant with soft spring leaves got shredded including climbing roses, young saskatoon plants, vegetable plants in boxes, shrubs and my new cherry tree and mature peach tree. 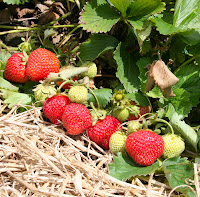 However, our unpredictable weather then gave us two days of heatwaves followed by a massive temperature drop turning my greenhouse tomatoes blue as they now have a well ventilated end with no glass. Strawberries are all ripening but lack of warmth reduces the sweetness and softness.
I hope that when you are reading this weeks garden adventure I will be back up to date with tasks and start my pottering around with numerous pleasant wee jobs, interspersed with coffee breaks and wee seats in the baking hot sun.
The Garden
As one display ends another begins. It is now the herbaceous border that is providing the colour with a combination of bright scarlet oriental poppies and blue flag iris. The gales had no effect on them but my new cherry tree, already suffering from an attack of black fly got its leaves shriveled, as did my plum and peach trees. 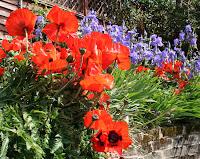 Poppy seed sown in many bare areas is germinating strongly and promises to give a good display.
My climbing roses, Dublin Bay and Gertrude Jekyll lost half their leaves in the gale, but are still putting on a decent display of flowers.
Cornus (dogwood), and Salix (willow) in the coloured stemmed winter border have both put on strong growth even after I cut them back right to ground level in March.
The Allotment
Strawberry picking is now a major task with a huge crop on all varieties. Gooseberries are also hanging heavily despite a thousand sawfly caterpillars mounting an attack when they thought I wasn’t looking. Black and red currants are also laden heavily with berries, already turning colour far earlier than normal. Nets will be needed for the red currants, but not the blacks.

Thinning turnips, swedes, chard and lettuce is at the two inches apart stage, but my thinly sown beetroot won’t be thinned till I can get thinnings as a baby beetroot crop. I do not thin leeks, spring onions or radish as they are sown thinly. Parsnips have germinated perfectly this year.

Chrysanthemums, sweet peas and gladioli planted out for cut flower and display have all established well as we have had good growing weather apart from the gales.
One area intended for a June planting of pumpkins, courgettes and cape gooseberries had been sown down with a mustard green manure crop to improve the soil fertility. This is now three feet tall and beginning to flower so it will be trampled down and dug in. It is best to dig with a trench so you can bury the green stems easily. They do not regrow once buried. It is an extra task, but has a really beneficial effect on the next crop. It is very worthwhile at the beginning of the growing period for late planting crops and also at the end after harvesting an early maturing crop such as broad beans, early potatoes, peas, salads and sweet corn.
The Greenhouse
Young vegetable plants left the greenhouse to get hardened off, then promptly returned as the gales blew in. Unfortunately it was too late for my courgettes and pumpkins which got shredded and blown out of their pots. I may be able to salvage some of them with a bit of luck.
Tomatoes were growing strongly, and flowering profusely before the gales blew out the glass. Now they are a bit cold but in time they should be ok.
Grapes now need constant pruning as every young shoot gets cut back to one leaf, as I can now see the bunches on the laterals growing from each rod.
Gardening Scotland 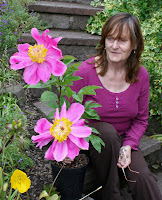 I have always attended this June event at Ingliston in Edinburgh as well as the Dundee Flower Show at Camperdown Park in September. However I now take a stand at these events to promote and sell my Saskatoon plants. They are becoming very popular as I was nearly totally sold out, only bringing back one plant. We also get the chance to look around other stands. Anna could not resist a gorgeous Peonia Doreen so it will now find a favoured spot in the garden. I really liked this Arisaema sikokianum, but was told it was a bit evil looking and a wee bit too much like a triffid, so I had to settle for a new rose for my garden hose. Life can be hard at times.
End
Posted by John Stoa at 23:00