A Blaze of Colour

A BLAZE OF COLOUR
There is just enough warmth and sunshine, in between showers, to bring the best out of the flowers.
Although everything has its season, and some may be short lived, if you grow a wide range of plants, there is always some part of the garden looking fantastic just about all year round. At this time of year we are spoilt for choice. The Shasta daisies have been allowed to spread over a few square metres as they are excellent ground cover. They started off a few years ago as a small box of six plants, but soon multiplied in our alluvial soil. They have now finished flowering but the show continues with the Shirley poppies sown adjacent. They really respond to the warmth of sunshine when it appears for a few hours every three to four days. Still, with an ample supply of rainfall in between, we no longer need to bother getting the garden hose out.
Summer flowers everywhere 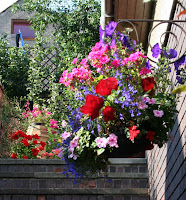 The hanging baskets are a blaze of colour with petunias, nemesia, geraniums, Impatiens and lobelia, and tubs and pots have a similar mixture but in different colours.
The main flower bed of Nonstop tuberous begonias just seems to get better each day.
Roses have had their first main flush and are now getting ready for the second flush, but mildew keeps having a go at them. However my huge climbing rose Mme Alfred Carrier continues into her second flush with numerous large white scented blooms. It grows up a trellis fence but I try to keep its height down to about twelve feet, though I know it wants to grow at least twice that height.

If you have a large spare sunny spot and something for it to hang on to this rose will reward you immensely. It may get a wee bit of blackspot, but never too severe.
Gladioli are now in full bloom on my allotment giving it some welcome splash of colour as well as providing ample cut flower for the house. Sweet peas from the allotment add both colour and scent for the house.
The time has come for Anemone Honorine Jobert to take centre stage as the clumps and display get bigger each year.  It really is very eye catching and a favourite for sun, semi shade or even shade and is very reliable and easy to grow.
Fruit
Save Now

My gooseberries survived the hard winter, spring gales, early summer thunderstorms, a plague of sawfly caterpillars and the heavy crop was monitored daily with a wee bit of sampling to see how sweet the fruit was before I picked them. Then I noticed the crop slowly disappear over a few days before I could pick the ripe ones. City Road Allotments have a resident family of foxes only ever seen by those few hardy souls who can always be found at dawn when the sun rises. I know of no other pest who would devour my gooseberries before they are fully ripe. They could not reach the lower ones because of the thorns, but did manage to eat half of the berries still on the bush. I thought foxes ate chickens, not gooseberries, and why can’t they have a go at the pigeons while they perch on the cabbages having a picnic.
However although they were very partial to Invicta, a large golden sweet juicy berry, quite delicious I recall from last year, even though the bush is thick with vicious thorns, they did not bother my other red gooseberry on trial for disease resistance. It is a mildew resistant thornless type so easy to harvest, but apparently not tasty enough for foxes. Scientists at James Hutton should look at this one again for flavour.
Autumn raspberries are late this year, and only just started to crop. Berries are not very sweet as they need more sunshine to increase sugar content. Summer raspberries that have finished fruiting can be pruned any time now by removing the old fruiting canes but leaving this years canes which will fruit next year.
Strawberries that have finished fruiting can be tidied up. Cut off the old leaves down to the top of the crown, and remove them together with any straw used to protect the fruit from soil splashing. Only allow the strawberry crop to fruit for three years, and then replace it with new runners saved from the old rows, or buy in new plants during winter.
The strawberry net has been removed to cover the blueberry patch as birds love these just as much as saskatoons which are now finished. Blueberries are now colouring up just nicely, but the crop is not as heavy as last year as the spring gales done them no favour at all.

The compost heap will be getting a fair bit of material as the summer harvest is well under way, so help it to rot down by giving it at least one turning. This is one dirty, unpleasant and hard task so a wee bit of muttering and swearing is permissible and does help the breakdown process to work faster.
Bramble Helen has now started to crop providing fruit for compote, jam and the freezer. So far the fox has not noticed these.
Vegetables
It is very hard to stay one step ahead of nature. The wet years have allowed clubroot to become a major problem with brassicas. We can no longer get Calomel dust and as the spores remain active for up to twelve years, the normal four year rotation has little affect. We can lime the ground ahead of planting, even dust some more into the planting holes and grow the plants in pots during the early stages. This gives a bigger more robust plant a good chance to fight off any attack.
I lost most of my spring planted cauliflower All Year Round to clubroot, so I was determined to give my summer crop a better chance. They all got potted up and regular feeding so I was quite proud of my two rows looking so strong after planting. Nets protected them from pigeons, and I don’t think the fox likes caulis. A week later I was horrified to find half of them wilting. Digging a few of them up, it was not clubroot, but the cabbage rootfly maggots.
We try hard but nature wins in the end.
Next year we must seriously look at pest and disease resistant varieties, though that often means at the expense of flavour.
End
Posted by John Stoa at 15:16