Back to the Land

BACK TO THE LAND
Allotment life was supposed to be about living the dream. A place for quiet recreation, fresh air, sunshine, an abundance of fresh fruit and vegetables, then after a wee bit of horticultural exercise and graft, we relax on the patio by our sheds enjoying the scent from the flower border while we have a wee refreshment.
There has not been a lot of leisure time on the land this year. The season has not been in our favour, at least not in the north east of Scotland. The summer did try to appear on more than a couple of occasions, but was rapidly followed by cool and wet conditions.
Those plants of a more tender nature, beans, courgettes, pumpkins, sweet corn and Cape gooseberries have not had a chance.
However, our native weeds have not been deterred and hoeing just seemed to transplant them rather than eradicate them. Still, we plod on as there is always a job to do and hope that sometime soon the sun will return and plant growth will be back to normal.
Vegetables

Onions are looking really strong this year. The ground had a lot of compost dug in and had been green manured with an early mustard crop. The onions were sown at home on a windowsill in cellular trays then hardened off in my cold greenhouse. The plants germinated in groups of one to four plants per cell, then each cell clump was planted out six to nine inches apart. This close spacing has not held back the onion size. The wet season has caused a few plants to suffer white rot, but these diseased plants were removed as soon as they appeared. 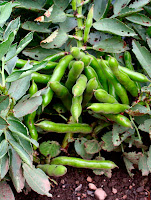 Beetroot, lettuce, radish and spring onions have all grown well and continue to crop with repeated sowings.
Sweet corn is very poor with only half the plants putting up a flowering spike.
Pumpkins and courgettes have been in a state of shock for weeks, though the French beans have now decided to grow.
Cabbage, cauliflower, sprouts and kale have been very mixed. I lost most of the first two through some very serious clubroot fungus, but the others seem to resist it and are putting on excellent growth. Turnips and Swedes are also growing very well in the wet season.
Broad beans have now been harvested, but I am trying another sowing to see if I can catch a late crop. I am also cutting the old plants down to a few inches of ground level to see if they will regrow and give me another crop. Sometimes you get lucky.
Fruit
Red currants are now in the demijohn, and black currants in the freezer. Some will be for jam, some for compote and some for wine. The bushes can now be pruned. Red currants get side shoots shortened by a third to encourage spurs on the main shoots and blackcurrants get one third to a quarter of older fruited wood removed. You can usually find a strong one year old shoot that you leave as it will produce the best fruit next year.
Bramble Helen is now in full cropping as is the gooseberries and saskatoons. They are all bearing heavy crops and do not seem to be affected by this years weather. It is the beginning of the Saskatoon pie season, though there is plenty for eating fresh off the bush, jam, compote and wine.
Flowers
This is a time for planning ahead for the next spring flowering display. Wallflower seedlings are now ready for transplanting into rows a foot apart so they can grow on and make a bigger plant for flower beds in October. They get dibbled in at four inch spacings. If you want really good plants you have to grow your own from seed as garden centres will only supply smaller plants in boxes.
However pansies, polyanthus, primroses, myosotis, daisies and Iceland poppies can either be home grown or bought from local garden centres as the plants are usually smaller and easily produced.
Pests, diseases and weed control
The weather affects these just as much as us. Caterpillars have had a great time and greenflies and blackflies had a slow start but are now at epidemic levels. You can only go so far with picking these off. However there are still some chemicals available that will do the job without harming the environment.

Mildew is now a big problem as the chemicals available to the amateur gardener are very weak and continual wet weather means the sprays get washed off before they get a chance to work.
Weed control is at the same stage. Glyphosate is available, quite environmentally friendly and an excellent herbicide, but needs at least two to three days of dry weather to work effectively.
The formulation available to the amateur gardener is about a quarter of the strength of the commercial product used by farmers, growers and local authorities.
Allotment Open Day
The City Road Allotments are having an open day to let the public see our plots.
Refreshments are available and there will be many plants for sale, fresh vegetables, home baking, jams and tablet. Open on Sunday 7th August 2011 from 10. 30am to 2.30pm
End
Posted by John Stoa at 14:55