LATE SUMMER HARVEST
September must be a very healthy month. Fresh vegetables and fruit are at their peak. There is such a huge range available that you should be able to reach your five a day needs by lunch time and a few extras at teatime as the bonus.
If you managed to catch the sun when it appeared briefly last month you might just have a wee tan, and the garden is providing some gentle exercise, removing the last of the weeds, a bit of pruning and the harvest tasks.
As the harvest is gathered there will be plenty of waste for the compost heap. However any diseased leaves (blackspot, rust, mildew), or roots (clubroot) should not be composted, though I still use mine. I grow my sweet peas along a fence in the same place every year and build up the fertility with compost as they are gross feeders. They also appreciate a deep fertile soil that is well drained, so in late autumn I open up a deep trench, put all my diseased plant material in it and turn it over. Sweet peas are in a different group from roses and brassicas so will not be affected by these problems, but remember the disease spores can travel down a slope in the winter rains so consider where you site your sweet peas.

Onions grow best in very fertile well drained soil and need plenty of
sunshine to grow and ripen, so this should not be a good year for them as there has been a distinct lack of sun and an awful lot more rain than we need. Yet my onions have never been better. I put this success down to good soil and the right choice of variety. One £2 packet of seed of onion Hytech gave me a crop of 150 large round onions that are reputed to store well. They are now lifted and will be dried out in the sun. When the foliage has gone brown I will rope them for easy storing hanging up in the garage.

Sweet corn is another crop that needs warmth. Normally I would get about seventy cobs from sixty plants grown from one packet of seed. I got the excellent plants, but just as soon as they got growing the gales came. They have never really recovered. Growth is reasonable but the plants are totally disorientated. Only a few male flowers appeared at the same time as the female silky tassels grew from the top of the cobs. Other male flowers appeared two weeks later by which time the female tassels had withered, so pollination was very patchy and I will only get about a dozen decent cobs. There will be nothing for the freezer.
Beetroot germinated and grew very quickly. Thinnings were removed as young baby beet, but those remaining have not grown into the normal larger sized beet. It seems this will be the year for baby beet. Last year I left my main crops of large beetroot in the ground where the early snowfall provided a cold blanket which protected them from hard frosts. They kept perfectly till the end of February.
Beetroot is a very healthy vegetable which we use a lot of to make soup and eat fresh in salads after boiling and dressing in a sauce made from soya sauce, balsamic vinegar, honey and seasoning.
Beans have had a mixed year. Broad beans were good, but I chose a dwarf variety, The Sutton which did not crop very heavily. However I have sown another late batch, now in flower so I hope to get two crops this year. It makes a heavenly soup. French and runner beans have been slow to grow and cropping has been light. There has not been the usual heavy crops for the freezer. 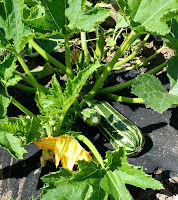 Courgettes and pumpkins both suffered from the gales but are now growing strongly. They have lost too much time and with a poor summer the harvest will not need a wheelbarrow to cart them off the allotment. My winter soups will be well rationed, but they both brilliant.
However many other allotment holders who had kept their plants protected under glass till after the gales have had fantastic crops. Next year I will not be so early to get them planted.
Swiss chard has again grown very well this year and the variety Bright Lights has a wide range of attractive colours with red, yellow pink, white as well as green stems. This leafy vegetable is very high in vitamins and minerals, dietary fibre and proteins. It is used in stir fries, salads when very young and soups.
Healthy fruit has been in abundance this year, with most now either consumed fresh or in the freezer. Autumn Bliss raspberry is very late and I am still waiting for my first serious picking.
My new perpetual strawberry, Malling Opal has been a huge disappointment. A row of ten plants only produced one runner. The fruit is hard, ripens unevenly, has no great flavour, and it is not a heavy cropper. It is supposed to crop till the end of October, but unless we get a late summer the fruit is hardly worth picking. This variety was bred in Kent so maybe it is just not suitable for Scottish conditions. 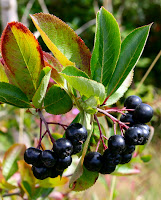 Blueberries lost a lot of foliage in the gales so the fruit is smaller than normal, but the crop is still quite heavy. These berries are similar to my saskatoons but it is a real advantage having them in fruit when the Saskatoon picking has finished.
The chokeberries, Aronia melanocarpa Viking is now in full cropping. Some will be used for jam, some for compote and summer puddings and a batch for making a strong red dessert wine. Hopefully this will be at its best in three years, but I will need to sample some round about Christmas just to make sure it is maturing ok. The fruit is a bit astringent so is not normally eaten fresh, but can be juiced or processed into many products. The very dark fruits are quite high in vitamin C and it has one of the highest levels recorded of the antioxidant anthocyanin.
Hopefully my wine will be a true health giving tonic.
Rhubarb may have got hammered by the gales as the large leaves were a sitting target, so there was no early crops, but they soon recovered and have been growing very strongly. We are now taking off our final picking for the freezer, so the plants can build up a healthy crown to see them over winter. As well as rhubarb crumble and pie it makes a lovely jam if mixed with dried figs.
Winter crops will provide the fresh vegetables right through the winter so will not need to be stored or frozen. Leeks, swedes, cabbage, cauliflower, kale and Brussels sprouts are all putting on good growth, though some have been attacked by caterpillars, pigeons, rootfly maggots and clubroot. You do not get your green healthy winter vegetables easy.
End
Posted by John Stoa at 15:01