A Year in the Garden

LOOKING BACK
This time last year I wrote an article to sum up the growing season for 2010. A poor wet summer followed a very bad winter, just as we had been getting used to mild winters and good summers. I made a bad assumption that since it had been a rotten year in the garden in 2010 this year will be better. I really got that one wrong. This year has been a repeat of 2010 but at a more severe level.
Last winter was extremely severe starting with blizzards in November and leaving piles of snow which never really melted till March. This was followed by a very cool and wet summer with frequent gales that did nothing to improve plant health. Most of the winter was spent shovelling snow, clearing footpaths and roads rather than digging the allotment. The autumn clear up of weeds and leaves in 2010 never got started so there was a massive amount of catch up work needed in spring. Then, just when you think you are getting on top along comes the gales and all the young spring leaves get shrivelled up and other plants such as my pumpkins and courgettes got blown out of their pots. 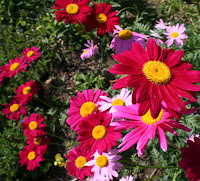 However we do learn our lessons, so I have taken every opportunity to spread plenty compost over the allotment and get it dug in. I have completed all my digging of bare ground and now it is only those areas where I am growing a green manure crop that need digging. Those are next to get attention as I want to get the green foliage under the ground so it rots well ahead of the next crop, as soil organisms use up a lot of nitrogen as they break down the plant material. This can lead to a temporary nitrogen deficiency. There has been just enough dry days this winter to get up to date with weeding and clearing up leaves, though fence repairs are a steady problem with the gales.
Vegetables
Lack of sunshine and warmth and too much rain held back a lot of crops. This year I only got two small pumpkins, last year I had seven huge ones. Courgettes hardly survived after the gales tore them apart. Sweet corn needs sunshine, so cobs were poor as the corn had not been pollinated due to the male flowers coming out too late to pollinate the female tassels.
Cabbage and cauliflowers were wiped out by a combination of clubroot, rootfly and caterpillers. Brussels sprouts put on good growth, but the variety Bedford Winter Harvest had very small buttons.
I tried the short growing variety of broad bean The Sutton. It was very poor. Not enough pods and they were also short. French beans hardly produced any crop this year. 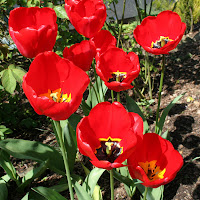 However there were successes. Onion Hytech produced a very heavy crop of huge onions which are in store on ropes and keeping very well. Swede Brora is huge, parsnip Albion, germinated well and has grown quite big, but many of the roots have split.
My early salads under low polythene tunnels were brilliant. After clearing these in early summer I used the area for a crop of carrots. These germinated well then disappeared a week later. Slugs have been having a great time in the wet weather and now that slug pellets are only half strength there is not much protection against them.
Leeks, kale and Swiss chard are having a good year.
Fruit
All my soft fruit crops have been really good this year, though Autumn Bliss raspberry has been very late and the allotment fox ate most of  my gooseberries. Saskatoons gave a very heavy crop, so now the surplus is being brewed for wine. Most fruit wines are best matured for a year or so before drinking, but Saskatoon wine is very good quite young.
Perpetual strawberry Malling Opal has been a complete disaster. It gave a very poor crop and no runners so it has been dug out. Raspberry Glen Ample purchased in Blairgowrie, died out with phytophthora root rot, and was replaced with root rot tolerant Cascade Delight. They did not like our Scottish climate and every one also died out. These were replaced by more Glen Ample supplied by Dobbies, in a fresh part of my allotment. The small raspberries produced on blood red canes well into the autumn is definitely not Glen Ample. Is it too much for the amateur gardener to ask for, hoping to get disease free plants of the correct variety as indicated on the label.
Pear crops dropped off with severe scab in the wet summer and plums and peaches faired no better.
However apples have been brilliant and Bramley gave a huge crop. Too many to use and store so 50 pounds are now being brewed into a delicious Sauternes type dessert wine.
Glasshouse
Tomatoes were a disaster. They need warmth and sunshine which was in very short supply. Botrytis, blight and root rots prevailed and by early September they had all died out.
Grape Black Hamburg and red seedless Flame were good though not as sweet as usual, but lasted well into December. My white seedless variety Perlette was delicious but the fruit was very prone to splitting. Outdoor grape Brant cropped well but only gave two bottles of juice whereas last year we got nine bottles.
New Year Resolutions 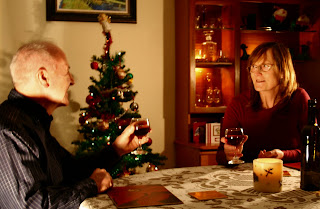 I will try again to get Raspberry Glen Ample. I will go back to perpetual strawberry Flamenco, and only plant normal broad beans. I will not harden off my pumpkins and courgettes too soon, and in an effort to stay clear of clubroot I will stop using mustard as a green manure, and try out some clovers. I will go back to Wellington Brussels sprouts as they are very reliable.
It is very pleasing to be enjoying a wee tipple on these cold evenings when the brew has come from your own home grown Saskatoon fruit, and in a very short space of time.
Now, I wonder if the blackcurrant wine is also ready ?
Cheers, see you next year.
End
Posted by John Stoa at 20:28