THE GARDEN NEVER SLEEPS
In winter most of the garden plants go dormant, but there is always a few that take this season as their turn to shine in the absence of competition. It is quite surprising what you can find to photograph on a bright sunny day, though often you may need to zoom in close to capture some little gems.
This year it seems we are going back to the normal mild but wet winters with snow up north but not in Dundee, at this moment as I write, but knowing that there could be two feet of snow when this appears in print. So I take advantage of any sunny days to wander around the garden and photograph those plants putting on a wee display to brighten up the winter months.
Flowers and scent
Climbing rose Dublin Bay is on a south facing warm wall so still has several bright red roses to greet you as you climb the steps to the front door. It is never in a hurry to go dormant.
There are also several tubs, planted with polyanthus in autumn intended for a spring display, but which have responded to the mild weather by flowering in early winter and are seeing the year out with plenty of colourful, but a wee bit weather beaten, flowers.

It is really too early for snowdrops, but they don’t know that, so there are several clumps in warm sheltered positions already showing large white buds determined to open up if the sun shines on them for a few days.
However my Helleborus, the Christmas rose, which used to begin to flower at this time has decided to take a rest, as it came into flower last September and October, well ahead of its time. Plants are just as confused as humans about the effects of global warming and climate change creating very erratic seasons. Another confused plant has been my winter flowering yellow jasmine, coming into flower in September, but fortunately still flowering in January.

There are several shrubs that flower during the winter. The wintersweet, Chimonanthus praecox and the witch hazel Hamamelis mollis both have yellow scented flowers from December till early March. The wintersweet is best on a south facing wall in a sheltered location otherwise flowers may be less prolific. A more reliable shrub is the Viburnum bodnantense with pink scented flowers right throughout winter. A good variety is Dawn and Viburnum fragrans is also very popular for its pink scented winter flowers.
Down at ground level the winter flowering heather Erica carnea brings out its red, pink and white blossom from late November through to March. It is very easy to grow, great for smothering weeds and enjoys a moist position in the sun as a woodland fringe plant.

Ornamental foliage
Elaeagnus comes in many shades of gold and silver. It makes quite a large impressive bush that is great as a specimen or for screening purposes. It is another fairly easy to grow shrub that requires no maintenance other than to watch out for any shoots that revert back to the green form. These should be removed as soon as seen.
Another favourite to brighten up the garden in winter is the variegated Euonymus fortunei. It comes in a range of colours but my two favourites are the silver Emerald Gaiety and the golden form Emerald’n Gold. These shrubs are all excellent ground cover and though slow growing due to lack of chlorophyll they can ultimately cover a fair bit of ground if you are patient.
Ornamental bark and stems 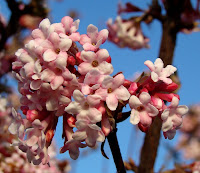 The winter garden would not be complete without some coloured stemmed shrubs that can dazzle in winter sunshine. Cornus Westonbirt and Mid Winter Fire are outstanding but also include the golden Cornus stolonifera flaviramea. The willow, Salix britzensis has bright orange stems and for a colour change back to green you have a choice of Kerria japonica and Leycesteria Formosa. Kerria has the advantage of a brilliant flower display in spring. The cornus and salix can both be pruned right back to ground level at the end of March to encourage the formation of a stool. They will soon recover and grow away strongly in summer.
There are a number of trees with very attractive bark. The birch, Betula jacquemontii has brilliant white stems and maple trees have a wide range of features. The snake bark maples have red or green stripes, the paper bark maple has reddish mahogany peeling bark and the Japanese maple Sangokaku has brilliant bright red young shoots.
Flowers in the home
As we begin the new year many plants brought into flower for the festive season have now had their moment and other plants take centre stage. All my Christmas cactus are now finished and are getting dried off for their resting phase. However now is the time for our six year old white Phalaenopsis orchid to provide the flower display. It has been grown in a warm bright bathroom with ample moisture every time someone has a shower. It loves this place so much that it has grown a double spike of flowers.
Winter might be with us but there is always life in the garden.
End
Posted by John Stoa at 11:16