PLAN THIS YEAR’S GARDEN
Now is a good time to look ahead and make plans for this year’s garden and allotment. It is always interesting to try new varieties of fruit, flowers and vegetables, but once you have found the perfect variety there is no good reason to change it. My allotment is just too small to keep trying small rows of new vegetables when I prefer to use the space for my tried and tested winners that I know will give me a good crop.
This year I made sure I got my packet of Suttons Hytech onion seed, as it has been outstanding, and broad bean Giant Exhibition. Last year I tried the dwarf broad bean The Sutton and it was very short in height, a very poor cropper and not many seeds in each pod.
My row of perpetual strawberry Malling Opal has been dug out. It hardly grew, produced no runners and one row of twelve plants gave me less than six berries. I will go back to Flamenco which was a great variety. 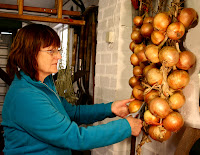 The garden centres are now getting the new seeds, bulbs and corms in so it is a perfect time to sort out this year’s crops. I have had a batch of fifty mixed tuberous begonias bought about twenty years ago. They increase slowly every year as the tubers grow large and I split them in spring. However I needed to add extra colours as the white and yellow colours have not bulked up as quickly as the red, pink and orange colours. Found excellent tubers for 0.99 pence each. Pretty good value I thought. I have also purchased some fuchsia plugs for hanging baskets and a hardy one called Snowcap for the border.
Allotment
It is very wise to plan a four year rotation for vegetable crops to prevent any build up of pests and diseases. I also integrate my chrysanthemum and gladioli beds, and strawberry patch, which I move every three years, into the rotation to extend it further.
Crops can be grouped according to their needs and although everyone has their own variation, it usually follows as potatoes, brassicas, heavy feeders and root crops. My rotation is slightly different as I have no space for potatoes, but grow a lot of pumpkins, Swiss chard and Cape Gooseberries.
Each year I compost one section quite heavily for onions, leeks, beans, sweet corn, courgettes and pumpkins. Pumpkins and courgettes need very heavy composting to retain ample moisture throughout summer. I also compost heavily for my sweet corn as I grow them quite close together to assist wind pollination, and make sure they do not need to compete with adjacent plants for  feeding.

Another section gets a normal spread of compost for my brassicas, cape gooseberries and salads but the area I grow root crops in does not get any compost otherwise roots may split.
The brassica patch gets some lime in winter as they do not like an acid soil.
I grow sweet peas in the same place each year and this row always gets double dug and loads of compost. The sweet pea seeds have now been sown in cellular trays two to each cell and will germinate on the windowsill. Broad beans have also been sown but at one per cell in cellular trays. They will all be cooled down after germination and hardened off as they prefer cooler temperatures.
Garden
The two previous hard winters killed out some shrubs, so this bare patch has been dug over and will be sown with annuals which enjoy a dry sunny border such as Livingston daisies, Star of the Veldt and Shirley Poppies.
Greenhouse
Tomato Alicante, Sweet Million and Gardeners Delight are my regular foolproof varieties planned for the greenhouse. They will be sown on the windowsill in mid February then pricked out into small pots. They need warmth but I try to grow them cooler otherwise they will be ready for planting before the greenhouse has a chance to warm up.
Plant of the week. 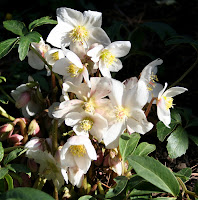 Helleborus niger is also known as the Christmas rose and belongs to the buttercup family. It occasionally flowers at Christmas if weather is kind, but more likely in February. I have a pure white flowered strain, and as it is evergreen soil splashing onto the blossom is not such a problem, though I usually remove some older leaves and thin out the crown to allow the flowers to be seen.
There are several species in cultivation and many varieties with flowers varying from white to purple and green, and some with spots and mottling.
They need good rich soil that is fairly moist but must be free draining. They enjoy a woodland fringe position with dappled shade, but in Scotland they will be very happy in full sun.
Once the clump has been growing for several years it can be dug up, split into several pieces and replanted to increase stock. Top dress annually with well rotted compost.
END
Posted by John Stoa at 23:22