Work in the Winter Garden

IT’S WINTER BUT THERE’S WORK TO DO
This has been an excellent winter for catching up with outdoor gardening tasks. It has not been too cold, but just enough frost to firm up the ground for getting on with the digging. We have not been bothered with a lot of wet weather or snow so fence repairs, staking and fruit bush pruning are all in hand. The mild weather has brought on a lot of early flowers with snowdrops, crocus and aconites about a month ahead of their normal season. Normally we should worry about this, as a late frost will do them no favours, but weather forecasts do not seem to give us much cause for concern, so just enjoy the bonus for as long as it lasts.
Outdoor tasks 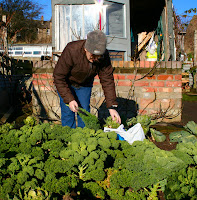 Harvesting continues with fresh vegetables from the allotment including cabbage, kale, sprouts, Swedes, Swiss chard and leeks. Stored eating apples are now finished, but Bramley cooking apples are still plentiful, though a few are developing a wee bit of brown rot, so these are removed as soon as they are spotted. Onions in store are still perfect, quite sweet and full of flavour.
Prune summer fruiting raspberries by removing lasts years fruiting canes down to ground level and tying in all the one year old canes which grew last year as they will produce this year’s crop. If you have a lot of canes remove any weak ones and reduce the number to leave enough so that when they are tied in along the top wire with a running knot the canes will be spaced about four inches apart.
Autumn fruiting raspberries are removed entirely at ground level as the row will produce new canes which will fruit at the end of summer and into autumn. 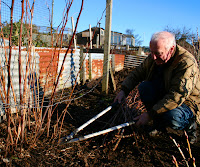 I feed my summer fruiting raspberries but not the autumn ones as they have never lacked vigour and I do not want canes higher than six feet. However I will give them both a good dressing of well rotted compost to help conserve moisture just in case we get a dry summer. Now don’t laugh, it is perfectly possible, though most unlikely if we consider recent past summers.
Blackcurrants were pruned immediately after fruiting, but redcurrants can now be winter pruned. I have established a bush with nine main stems. All side shoots growing from these main stems are spurred back to a few buds and two of these stems will be replaced each year as new young shoots grow up from the base.
Gooseberries are grown on a short leg to allow good air circulation as previously older varieties were very prone to mildew. Modern varieties are more resistant so mildew is not a problem. Cut out any shoots growing up the centre and those on the outside if they are too near the ground and if there is still a bit of congestion in the middle which can make picking a thorny nightmare then do a bit of spur pruning to assist picking.
Brambles are pruned like summer raspberries but as the shoots are quite long devise a bending and looping system without breaking the canes so they take up less room.
Outdoor grape vines need an annual cut back of all shoots back to one bud on the established framework. When the vine is in its early years allow it to grow like a fan or espalier apple so it fills its allotted space with a framework of main branches spaced about one or two feet apart. These will need a permanent strong wire support as in summer the young shoots can grow very long if you don’t get the summer pruning done on time. It is these young shoots that produce the bunches of grapes. Each shoot then gets summer pruned back to two leaves after the bunch, but now in mid winter they are cut off right back to the stem.
Indoor tasks
Greenhouse grapes are grown the same way, but the framework is usually upright rods spaced about 18 inches apart. Pruning needs to be completed in January as they are quite quick to start growing in the warmth of the glasshouse.

Geranium grown from cuttings are now well rooted and can get potted up into small pots.
Blackcurrants in the freezer surplus to our needs are now being brewed into another batch of wine.
Plant of the week.  Winter Aconites 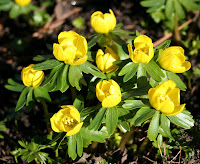 Winter aconites, Eranthus hyemalis, normally appear in February but when we get these mild winters they can start to show their buttercup yellow flowers in early January. They associate well with snowdrops and compete to see who can produce the first flower of the year. Plant a patch close to a window so you can enjoy the promise of spring just round the corner from the warm comfort of your home.
They belong to the buttercup family, are not too fussy about soil and will grow in sun or shade as long as the ground has good drainage. They are perfect under deciduous trees that have a dense canopy as the Aconites produce their leaves quite early, while light and sunshine can filter through. As soon as the tree begins to produce its canopy, the aconites have had their short growing season so are happy to go dormant, and if the ground goes dry under the tree canopy this helps to ripen off the corms. Propagate by splitting up clumps immediately after flowering and save and scatter the seeds as soon as they are ripe. They will flower from seed within three years.
END
Posted by John Stoa at 16:44