GOOD PLANTING WEATHER
Scotland, unlike much of England, does not seem to be troubled much with drought and the warm early spell in March has set up the garden for a promising year. Although frequent showers can be a nuisance when you want to crack on with the planting and sowing it is giving us perfect soil conditions for these tasks. However don’t rush onto the ground if it is still wet and even when ground conditions are perfect hold back planting if the air temperature is still cold.
Hardening off plants is now in full flow. Established geraniums have been out since mid April and cabbages and Brussels sprouts both grown in trays are also hardening off for planting at the end of April. However be careful with Busy Lizzies as they are easily affected by a sudden drop in temperature and petunias, marigolds and fuchsias are not much better.
Several fuchsias bought in March as plugs are destined for hanging baskets and after potting up they made excellent growth. The tops were pinched out to make them branch and these were used as cuttings which rooted very quickly and now need potting up.
More potting up 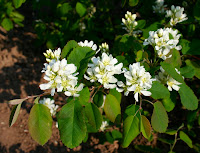 Tuberous begonias started off in the house then transferred to the cold greenhouse have sprouted really well and are now being potted and boxed up to give them more room. My tubers must be over fifteen years old and frequently get split up to increase stock. Some tubers have up to eight shoots on them so will benefit from splitting. Use a sharp knife and make sure each piece has plenty of tuber on it. If you have any sulphur rub it onto the cut surface to seal it and prevent disease. If you don’t have any, don’t worry, I don’t have any and have never lost any yet. Begonias are tough.
Himalayan blue poppies overwintered outdoors in cellular trays are now growing quite strongly so they are now potted up in separate pots. They are very hardy and only need dappled sunlight but keep them moist at all times.
Planting
Tomato plants have been hardened off and after a few days getting climatised in the cold greenhouse have been planted into their growbags. I am growing Alicante, my favourite large tomato and Gardeners Delight, also a favourite with Sweet Million my best cherry tomato. I have never found a sweeter cherry tomato so although the seed is expensive and the packet only has about fifteen seeds in it, I still get enough for two years plants as I only need to fill one growbag with three plants.
Some hanging baskets with geraniums, lobelia and petunias can now be planted up and left to establish in a sunny sheltered spot sat on top of a large flower pot to keep it from falling over. They will not be hung up till I am happy all the plants are growing strongly and have started to flower.
Other baskets with fuchsias and Busy Lizzies will have to wait a bit longer till there is room in my greenhouse, or summer returns to remove all threat of a late cold snap.
Fruit trees now in full flower 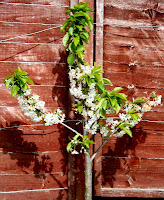 Peaches and dwarf cherries put on a great show of blossom, but time will tell how successful pollination has been. Plums and pears had hardly any flowers, though most of my pear tree has been grafted so I will have to wait till next year for these shoots to ripen up for fruiting. Apple trees have all got plenty blossom except Fiesta which has a tendency for biennial cropping, so this must be its off year as I got a good crop last year. Saskatoon bushes are covered in flowers yet again.
Pests
Greenfly on my roses are now breeding at full vigour so the sprayer will have to come out and gooseberry sawfly larvae have appeared again and will chomp through the bushes unless you discourage them with a wee bit of chemical.
Early carrots have been covered with fleece to keep out the carrot fly. 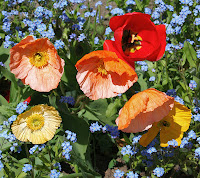 Plant of the week
Iceland Poppies has always been my favourite poppy as it is very early and mixes with all the other spring bedding flowers and tulips and will also fit into the front of the herbaceous border. Seed can be selectively harvested from your favourite flowers in early summer then sown a few weeks later in cellular trays. They germinate easily and grow rapidly so transplant them into bigger trays which will be ready for planting in October to where they are to flower the following spring and summer.
END
Posted by John Stoa at 16:01