SOW ROOT CROPS NOW
Now is a perfect time to start sowing the root crops in the vegetable patch. The soil is warming up just fine, it is moist and well weathered having been dug over early last winter. Root crops enjoy land that was well manured for a previous crop, such as beans or onions so it has plenty of humus but no fresh manure or compost, otherwise roots tend to split or fork.
Potatoes, however, may be a root crop but their needs are very different as they do require well manured land, being heavy feeders and scab is always a problem if the soil is poor.
Root crops tend to follow the heavy feeders in the rotation but remember turnips and swedes are brassicas and can suffer club root so they must not follow the cabbage or sprouts.
I tend to keep all my root crops together and run a four year rotation to try and avoid clubroot and carrot fly. Root crops include carrots, turnips and swedes, parsnips, beetroot, radish and if you fancy something different sow some salsify and scorzonera.
Most of these can be sown now and carrots and beetroot can also be sown as catch crops in late summer using spare land that has just had a crop harvested such as cabbage, early potatoes, salads, French and broad beans. However you will need to use a quick maturing variety.
Carrots
My best ever carrots were an early sowing of Early Nantes on the side of my celery trench hoping to catch a quick crop before I started to earth up the celery. I beat the carrot fly and got such a heavy crop that most of them had to go into the freezer. This helped to sweeten them up significantly.
Autumn King was always a reliable heavy cropper, but carrot fly is such a problem as the amateur gardener has no chemical cure available. We have to resort to barriers (fleece) or resistant varieties. I have not found these to be very resistant and they lack the flavour of our standard varieties.

Turnip, swedes and radish
Golden Ball and Purple Top Milan will give us some early turnips and good Swedes are plentiful and take us right through the winter. I grow my radish adjacent as they can all be prone to clubroot so I limit its spread.
Parsnip
Roasted parsnips will add class to numerous meals, so I aim to grow enough to last from about November, (or earlier if we get a frost to sweeten them up) to the following spring.
I prepare a deep seedbed in late April or early May then mark my row, but before sowing I go along the row pushing a spade down to create a deep slit. This is filled with friable soil or old compost. Mark the row again and sow four to five seeds every eight inches apart. After germination thin these to one seedling. They are very slow to germinate so I sow radish in between plant stations.
Salsify and scorzonera
If you enjoy healthy food try these as they are packed with nutrients and minerals. I found them to have a similar flavour to sweet corn, though it is said they taste like oysters. Grow them like parsnips but spaced closer. The scorzonera root is black and both must be lifted carefully to stop the long deep roots from breaking. There are now numerous recipes for them as they are becoming the latest healthy plant to try out.
Beetroot

Another fantastic health food that can go in salads, served in a sweet and sour dressing and they also make a delicious soup. Even the leaves can be eaten in salads or stir fried, and nothing will beat your own beetroot chutney or pickled baby beet from early thinning.
They fit in very well as a baby beet catch crop in between other crops. Grow an early batch in cellular trays in the glasshouse then transplant outside in early May. They will interplant along the rows of sweetcorn and get harvested before the corn plant needs the space.
Plant of the week 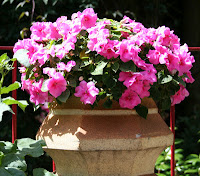 Impatiens, (Bizzie Lizzie) has always been a very popular summer bedding plant for tubs and hanging baskets. Although a perennial it is treated as an annual and usually propagated from seed. However once you get a range of really good colours you can take cuttings and keep plants all year round. They also make good house plants for a sunny windowsill. Probably the cheapest method is to buy small plug plants in spring and grow them on. Plug plants are a perfect size for hanging baskets where you can pop them through the side of the basket as well as the top and once fully grown will smother the whole basket in flowers.
END
Posted by John Stoa at 20:43