ENCOURAGE BEES WITH FLOWERS
Not many people realise the crucial role that bees play in the production of our food and flower crops. The vegetables we grow from seed in wee packets is only possible because the crop was propagated from a flowering plant that needed to be pollinated by bees to fertilise the seed so they would be viable. Apples, pears, plums, strawberries, raspberries and most other fruit whether grown in UK or abroad still needs bees to pollinate the flowers so the fruit can set. Those brilliant fields of golden rape seed need a lot of flying insects to pollinate the crop to ensure a good harvest.
Some crops such as sweet corn is a grass type plant that is wind pollinated, and many trees are wind pollinated, but most of our food crops and flowering plants need ample bees and other flying insects to pollinate the crop. 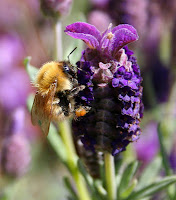 Bees have been in the news a lot in recent years as their numbers of some species are in serious decline. Bee keepers in the business of producing honey have seen massive losses of bee populations, and scientific studies on a global scale all report declining numbers of bees.
A lot of the problems have been due to virus disease spread by the Varroa mite infecting the bees as well as the Nosema fungus, but other factors such as loss of natural habitat and agricultural crop spray programmes have not helped.
In the past there was a lot of really toxic chemicals such as the organophosphorus, parathion and malathion and the organochlorines such as DDT used for crop protection. These were excellent for killing pests, but were not specific and had a devastating effect on bees and other wildlife.
Most of these chemicals have now been withdrawn, but debate is still ongoing with existing pesticides still in use by farmers and growers. Seeds are often treated with chemicals before sowing and this can have a devastating effect on bee populations.
It is hard to strike the balance between the need to produce sufficient food crops to feed the world and protect vulnerable wildlife. If the bee numbers decline so will food crops which depend on pollination. 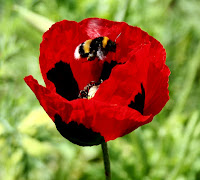 Bees, just like humans need a varied diet. However, it seems it should not be too complicated as they derive their protein and nutrients from pollen and their carbohydrate from nectar. This is complicated by the fact that pollen and nectar vary from plant to plant, and whereas we are encouraged to eat at least five or more fruit and vegetables a day, the bees also need a varied diet. In the past there was a huge variety of wild flowers rich in different types of nectar and pollen, but farmers have cleaned up the land and field boundaries and killed off most of these wild flowers, and urban expansion has also eliminated areas of weeds (wild flowers). Roadside verges have also been mown too frequently in the past, though economics is reversing this trend, and new verges and motorway embankments are now deliberately being sown with wild flower mixtures.
A bee’s life is not easy in a world dominated by humans, though our future depends on their good health.
A garden for bees

It helps bees if we can provide a wide range of flowers that they can use for pollen and nectar collecting. I am aware that the Berberis darwinii flowering in late April is a magnet for bees which then find my plum trees which need pollinating. Even in this cold year my peach was very late in flowering but then it was in bloom when there was a few bees around, so they helped me with the pollinating, which is normally done with my sable brush.
Apples, plums and pears all need pollinating so bees need to be encouraged into the garden. Poppies, lavender, heathers, pyracantha, fuchsias and numerous other plants all attract bees. Unfortunately a neighbour’s unkempt garden full of weeds including willowherb, nettles, dandelions, dockens and ragwort, may not be very attractive, but the bees just love these wild flowers, and probably prefer the garden where nature has taken over. You can buy wild flower seed mixtures to add into alpine meadows, pastures and hedgerows or other wild garden areas.
These just need simple management so the seeds don’t become a nuisance to neighbours.
Plant of the week 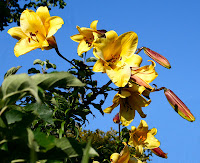 Scented Trumpet lilies produce huge colourful flowers in mid summer and a very heady perfume making them perfect plants around the patio. They like well drained deep soil with plenty humus added before planting. They do not mind a dry stony soil so long as they can get their roots deep down to seek out moisture. They can grow up to six feet tall so need staking, and be careful when getting close to them as the stamens are rich in pollen and this can stain clothes.
They are best propagated by retaining the seed pods and sowing the seed in late winter in a cold frame. Germination is usually fairly good and the plants only need two or three years to reach flowering size.
END
Posted by John Stoa at 20:05