Reap what you sow

FRESH HEALTHY SUMMER FOOD
The allotment is now providing fresh fruit and vegetables for the table for immediate consumption as well as stocking up the freezer, and cut flower for the home. We grow a wide range of fruit and vegetables, but in smaller amounts using successions of sowings so we can eat very healthily right through the summer.
Summer vegetables
A little bit of warmth and plenty moisture has brought out the best of some vegetables. Cabbage, kale, turnips and salads have just loved this weather. Early sown beetroot was held back by the cool weather, but those sown a couple of months later got away to a good start and are now just as big as the earlier ones.
Lettuce has been perfect and I have now sown my fourth row to give us succession of cropping. Other salads are also going in where ever I can find space, such as in between my strawberry rows as this crop is finished and the old leaves have been mown down and removed together with the straw. I dig over the middle of the row about 15 inches wide and get a quick crop in before the new foliage needs the space.
I am sowing a row of Pak Choi, the Chinese cabbage which is very high in vitamin A and C. It can be used as a stir fry leaf, and is ready in a few weeks if you just use the leaves or a few months if you leave it to heart up.
Soft fruit

Blackcurrants are now harvested so the bushes can be pruned. I remove any low growing branches round the outside cutting back to the nearest fresh young shoot which will fruit next year.
Early bramble Helen is also harvested and most of the berries in the freezer.
Autumn raspberries are very late and only just starting to crop.
Gooseberries have had a great year with our best yield ever, but really needed more sun to sweeten up the fruit. We eat what we can and freeze the rest. Some will go into summer fruit compote, some will be stewed and some will give me a few demijohns of wine.
Blueberries are now cropping with a decent crop of good sized berries, but all well netted to protect them from the birds.
Cherry Cherokee gave a decent first crop, but there was a lot of split fruit which I will blame on the bad weather.
Saskatoons were later than previous years, but still yielded a good crop of berries. They are getting quite tall so some pruning to reduce height will be done once the nets have been removed.
Glasshouse crops
Tomatoes have only just started to ripen up, and two plants were so poor I removed them and replaced them with some large cape gooseberries which were getting too big for the windowsill.
Black Hamburg and Perlette grapes are looking good, (but not Flame) though very slow to ripen.
I now remove all new growths and any unhealthy looking leaves to allow good air circulation and sunlight to penetrate the canopy to ripen up the bunches of grapes.
Flowers 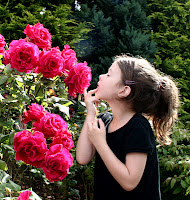 Dead heading is needed on poppies, geraniums, fuchsias, delphiniums, roses and any other flowers which may go to seed. Collect seed heads for sowing from poppies. Iceland poppies were sown a few weeks ago and have now germinated. These will produce plants to flower next spring.
Wallflower seed was sown in between my rows of sweet corn which were not growing strongly so there was ample room. They have now been transplanted into nursery rows to grow on ready for final planting in October.
Forget me nots, pansy and polyanthus were all sown several weeks ago and have now been transplanted into cellular trays to grow on for planting in tubs and baskets for flowering next spring.
Roses were poor on the first flush, but came back very strong for the second flush.
E H Morse, my best scented red rose has been outstanding.
Plant of the week

Phalaenopsis comes in a range of colours and is one of the easiest orchids to grow. Our white phalaenopsis lives in the bathroom so gets a warm moist atmosphere with dappled sunlight. It may get repotted with orchid compost every three or four years as it tends to grow out of its pot and may fall over. It never fails to flower in mid to late summer. They are available in numerous garden centres and florist shops, but although quite common, they reward you with a glorious display of flowers which can last for several weeks.
END
Posted by John Stoa at 10:32