EXTEND THE GROWING SEASON FOR FRUIT AND VEGETABLES


EXTEND THE GROWING SEASON FOR FRUIT AND VEGETABLES
Allotment gardeners traditionally always get a glut of some crop that we share with fellow plot holders, family and friends. Some crops such as courgettes, Swedes, cabbages and potatoes, plums and apples can all have a prolific year if the weather is kind. We also tend to grow too much of each crop just in case we get losses. However I am now tending to grow smaller rows and a wider range of fruit and vegetables so I get less surplus and have fresh produce available over a longer period. This idea can be extended further by using the protection of greenhouses, frames and polythene tunnels for bringing on crops earlier and extending the season into the autumn. 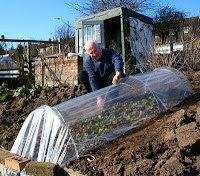 It is just about possible to be self sufficient in fruit and vegetables harvested from your own garden provided you accept each crop has its own season. The most difficult period is March and April when the previous years stored crops are just about done and the current year’s crops are still growing. This is when the freezer helps us out as most crops can be frozen and kept in good order for months. The summer and autumn months are the easy ones when there is plenty available and surplus can be stored. Winter is also not too difficult as there is a wide range of winter hardy crops such as Swedes, Sprouts, cabbage, leeks, parsnips, kale, Swiss chard and if you are lucky late sown, (August) summer salads such as spring onion, rocket, sorrel, corn salad and mustard mix can see you in fresh leaves till the end of January as they can tolerate a wee bit of frost. My outdoor beetroot has now finished but onions and pumpkins will stay fresh for a few more months.

Ground prepared well in advance can be covered with low polythene tunnels in mid March to warm up for a few weeks before planting out an early batch of lettuce, spring onions, radish, beetroot and carrots. These are sown in cellular plug trays also in mid march for planting out about four weeks later. The radish are always ready first then lettuce can be picked when quite small as there is usually plenty to grow on a bit bigger. If poly tunnels are not available a cold frame is just as good as long as the soil is well prepared.
Cabbage and cauliflower can also be harvested just about all year round by selecting varieties suited to each season. My spring cabbage can be cut in April and May as spring greens then other plants left to heart up. However these are often overtaken by my early summer cabbage sown in the greenhouse for early planting. Later on we pick the autumn cabbage, then the winter cabbage takes us just about to March, provided clubroot and other pests don’t spoil your plans. Cauliflower can be grown all year round in a similar way, though there is usually a gap in mid winter.

To grow raspberries and strawberries outside their normal summer season you need to look to the methods of the commercial growers. If you have the room in a glasshouse a couple of pots of an early raspberry variety are a luxury to sample fresh ripe rasps two to three weeks ahead of the early outdoor crops. However extending the season into autumn is normal now with Autumn Bliss and other autumn fruiting rasps. These will fruit till the end of November, but may not be very sweet as they need the warmth of sunshine for best results.
Strawberries can be grown under low polythene tunnels erected at the end of February over a young row planted up the previous autumn. I use the early variety Mae which never lets me down. I also extend the season into autumn with the perpetual variety Flamenco which will continue to fruit till November, but also needs sunshine. Flamenco will fruit from new runners throughout the season.
The summer blueberry season comes in August but saskatoons which are very similar fruit in July so giving almost two months of very healthy fresh black fruits.
The apple season gets extended by grafting early and late varieties onto my one large tree, so the Oslin fruits in August, followed by Discovery in September. Red Falstaff and Red Devil are ready in October but can be stored for a couple of months, then Fiesta, my late variety will store to the end of the year.
Outdoor grapes fruit in September to October in a normal year, but in the greenhouse my Flame starts in August followed by Perlette then Black Hamburg will last till December. 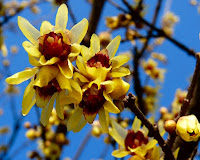 Wintersweet, Chimonanthus praecox can be a beautiful winter flowering shrub with yellow spicy scented flowers, but it needs a sunny sheltered spot with good soil and drainage. Planted at the base of a south facing wall with plenty of organic matter added to the soil at planting, then given a mulch so it doesn’t dry out just in case we get a dry year. It is deciduous so the flowers emerging in November and lasting in some years till March can be easily seen. This hardy shrub from the mountains of China can grow up to ten foot tall but careful pruning can keep it about six feet if preferred. The main disadvantage for the impatient gardener is that it takes about four or more years to settle down before it starts to flower. This is another reason why propagation is best by layering rather than from seed as the latter could take a very long time to reach maturity for flowering. Leave layered shoots at least two years to grow decent roots before digging up.