START SEED SOWING NOW
Winter is not yet finished as we are only in mid February, but every time we get a sunny day there is enough warmth to get some outdoor plants active. Snowdrops and aconites are well out and a very welcome sign that spring is not too far away. Buds on roses always seem to be ready to burst especially my climber on the south facing house wall. It has been underplanted with crocus and the warm wall has brought these out to show the first bit of colour. Later on, after these finish flowering, a naturalised group of Californian poppies take over for the summer months. None of these interfere with the growth of the climbing rose. It was necessary to remove a two foot square paving slab next to the house wall and remove a foot depth of builders rubbish and hardcore, and replace it with some decent topsoil mixed with compost before the climbing rose bush, Dublin Bay could be planted. The roots may only have hardcore, rubble and clay beyond my wee hole, but this climber has thrived. The catalogue says it will grow to seven feet tall, but I have had to keep it pruned to reduce height after it reached twelve feet. In summer it gets covered in a mass of bright red flowers. 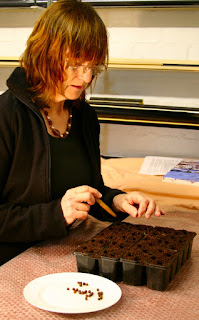 Indoor work has begun with the first sowings of tomatoes, sweet peas and broad beans. I start the tomatoes in shallow seed trays, and the sweet peas go in large cellular trays at three per cell, but the broad beans get one cell per seed. Initially they are all kept warm under a table at home, but as soon as germination begins they will be transferred to a sunny windowsill. Both sweet peas and broad beans however are quite tough so they will get hardened off quickly and go into my cold greenhouse.

Tomatoes
Last year the cold wet sunless weather really devastated the tomato crop. Alicante, Sweet Million and Gardeners Delight all suffered badly and many got replaced after rotting off in the growbags. Fellow allotmenteers rallied round with a batch of fresh young plants to replace them, but unfortunately labels had been lost so the varieties were unknown. This was indeed very unfortunate as one plant defied all the odds, put on fantastic growth and cropped brilliantly. The cold wet summer did not bother it. Now as I don’t know which variety it was, and I definitely want to try it again, I allowed the sideshoots to grow in the autumn and took them off as cuttings. I now have four excellent plants in pots which have had the tops removed so they will branch and I will get another batch of cuttings for this summer. It will be interesting to compare how they will perform against the new plants from seed.

Sweet Peas
You can sow the seed in autumn and overwinter them in a cold frame or cold greenhouse. This will give plants for planting out in early March which will then flower very early. Or sow them now for planting out at the end of March.
Sweet peas grow best in well manured soil which has been dug deeply. They can be grown up six foot canes as a cordon with sideshoots and tendrils removed to give large blooms on long stems. The stems are supported with sweet pea rings. Feed regularly for the biggest flowers, and once they reach the top of the canes you will need to remove the sweet pea rings which support them, lower the stems onto the ground and let them grow up the nearest cane again. If you are happy to grow for a colourful wall of colour just allow them to grow up a supported net six foot or more tall.

Broad Beans
Another plant that likes to be well fed so make sure the ground has been composted when digging, and give a generous dose of fertiliser before planting. After germination grow on quite cool as they are quite hardy. I also keep back some seed for a later sowing to give me plants to fill up empty space after spring cabbage or late leeks are finished, or even after my early summer salads grown under low polythene tunnels have been harvested. These give a smaller crop, but still very welcome and the broad bean roots have nitrogen fixing nodules on them which rot down to benefit the next crop.

Scarlet willow, Salix alba britzensis is at its best in winter after leaf fall to show off its bright orange red stems. I grow two bushes at the back of my coloured stem border in the winter garden. Last year they put on ten feet of growth even though I cut them down to ground level every year. They obviously enjoyed the wet summer. They will be pruned again at the end of March before growth commences and I will reuse the straight stems as garden canes, but remember they are still alive and will want to grow again. They can also be grown as a medium sized tree and are still very attractive in winter. Willows are very useful trees as they contain salicin which is used to make aspirin. Stems are also used to make baskets, living fences, cricket bats and the excellent vigorous growth makes it perfect for harvesting as a biomass fuel. They propagate very easy from hardwood cuttings in winter.