CHOOSING THE SUMMER FLOWERS
This is a great time to look ahead to the summer months and plan which flowers we will grow in our tubs, beds and hanging baskets. It is very easy to leave it a lot later, then pop down to our local garden centre and see what mature plants are available and buy in as needed. That is a more expensive option, and where is the challenge of trying to grow your own plants with your own selection of seeds. I have a fair few tubs, hanging baskets and annual flower beds as well as always finding plenty of bare patches needing brightened up with a few annuals, so I start with a flower seed order of annuals at the beginning of the year.
I also retain a large collection of mixed bedding tuberous begonias, purchased about fifteen years ago with new colours added to each year. They dry off easily in autumn and get stored in the garage over winter. Growth buds start to swell up at the end of February, when I then box them up into compost and get them started into growth. They are quite slow, so I can keep them under a table in a warm room for a few weeks before they need light, as it is still too cold in my unheated greenhouse. 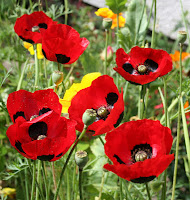 I also retain a collection of geraniums purchased about the same time and overwintered as small cutting on a sunny windowsill. Geraniums are quite hardy, so do not need too much heat and can get hardened off and put into my greenhouse at the end of March. A small greenhouse heater is available just in case a late frost threatens.
For many years I also kept a good range of Busy Lizzies flowering in summer, then growing them over the winter as a flowering house plant.  In spring I take cuttings to bulk up the numbers for the summer plantings. However difficulty arose from the attentions of red spider mites and greenfly which were difficult to control without a chemical insecticide available, so they now get purchased as small plug plants from garden centres in spring.

Geraniums and begonias are my favourites for colour and impact, but supplemented with African marigolds and Canna and Brugmansia dot plants to add the exotic look. I also use petunias, nemesia, Impatiens (Busy Lizzies) and trailing lobelias in my tubs to spill over the edges. 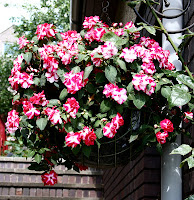 Red or white geraniums are brilliant as central plants in baskets and are very reliable. They are kept company with Nemesias, petunias, trailing lobelia and Impatiens. A hanging basket with one colour of Impatiens planted in the sides as well as in the top is a magnificent site when in full flower and totally covering the basket as a round coloured ball.

This is where I play around with a few annual seeds such as Cosmos, Star of the Veldt, Livingston daisies and a whole range of poppies including, Ladybird, Shirleys and opium poppies. Some of these (poppies) can be broadcast over prepared soil and raked in, though others (Cosmos and Livingston daisies) are better sown in small cellular trays then transplanted once they are a decent size.

Start sowing now with Lobelia, African marigolds in March, then in early April most others can be sown. I sow most half hardy and some hardy plant seeds in seed trays then prick out into cellular trays once they are big enough.
Use proper seed compost rather than general purpose compost, as most composts are now very low in peat with a range of other organic matter replacing it. Not all plants grow well in these new mediums. I have been getting very poor germination with peat free or reduced peat composts so experiment to find your own best brand or add extra grit to improve surface drainage. Some plants are very vulnerable to damping off, especially impatiens, petunias and lobelia, so give a watering of Cheshunt compound to young but mature seedlings if you feel they could be attacked. Liability to botrytis increases in cool low light damp spells of weather, like all of last year. 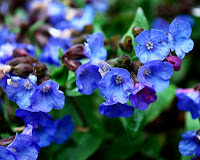 Pulmonaria commonly known as lungwort, but has over another dozen common names as it can be very variable in appearance. The blue to pink flowers bloom very early in spring on a low growing herbaceous plant that will associate very well with yellow doronicums and snowdrops and crocus all flowering about the same time. It is very easy to grow as long as it never dries out as it likes a moist, but not wet soil and will be happy in shade and partial shade. It does not have deep roots so propagates easily from dividing up the clump. The spotted leaves go dormant in late summer or earlier if a dry spell goes on too long.