PLAN YOUR PEAS AND BEANS


PLAN YOUR PEAS AND BEANS
Peas and beans are an essential part of the vegetable patch rotation. They are the crops that are the heavy feeders together with onions, courgettes and pumpkins, so they get the lion’s share of manure and compost during the winter digging. Prepare the ground in late autumn and leave it rough over winter so it breaks down to a fine tilth for sowing in spring. Several weeks before sowing add a dusting of lime if the soil is likely to be acidic. Peas and beans are ready for picking from early summer till the end of autumn and they can all be frozen for use later. Whilst we are all familiar with the normal freshly picked then lightly boiled peas, some really delicious soups can be made with both peas and broad beans.
They come in a range of types including garden peas, mange tout peas, sugar snap peas, broad beans, runner beans and dwarf French beans. As a healthy food they are at the top of the list being very high in a range of antioxidants, high in protein and minerals, fibre, the vitamins A, B C, E and K and a form of omega-3 fat. They have health benefits for a wide range of ailments. 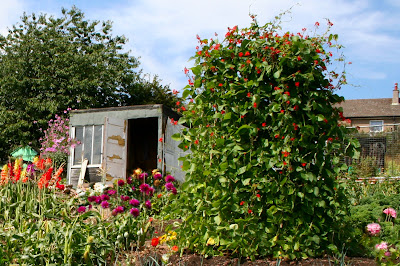 Peas and beans are all members of the leguminosae family which all have symbiotic bacteria which form nodules on the roots to capture and store atmospheric nitrogen. This is released back into the soil at the end of the crop when the roots rot down. This is why clovers and pea vetches are so popular as green manures sown onto the soil when it is not being used for cropping.

For the earliest crops peas can be sown in late autumn to early winter in a cold greenhouse and overwintered for planting out about March or early April, but depending on the weather at the time. They do not like cold soil and may rot if it is too cold and wet, but the ground can be warmed up with low polythene tunnels, or they can be covered with fleece. A popular method for autumn and early spring sowing is to use old guttering with end caps and drilled with a few holes for drainage.
Fill it with seed compost and sow the seeds at two to three inches apart each way. When ready for spring planting take out a shallow furrow and slide the plants and compost carefully into the drill.
A good variety for early cropping is Feltham First. Sometimes in good weather you can get a second crop by cutting down the vines after harvesting, but leaving some basal growth. This can grow again in late summer and give another picking in autumn.
Peas need to be kept moist so make sure they are well watered in any dry weather, and mulch where ever you have spare well rotted compost.
Kelvedon Wonder, Onward and Hurst Greenshaft are all very reliable mid season varieties, and for a late crop go back to a fast growing variety like Feltham first.
Most peas require support with pea netting for dwarf varieties, or galvanised wire netting on posts for taller varieties.

Broad beans are pretty hardy so an early March sowing in a cold greenhouse, or earlier on a warm windowsill in the home will give them a good start. Sow seeds individually in cellular trays and grow on quite cool. They can be planted out after hardening off at the end of March in soil same as for peas. Harvest in late summer in a single operation as most often they are all ready together, then use the land for spring cabbage, late salad crops or sow a green manure to improve soil fertility.
My favourite variety is Aquadulce.
Dwarf French beans and runner beans should not be sown till the soil has warmed up in May or early June. Dwarf beans can be sown in a double row a foot apart and spacing the seeds about four inches apart, or space six inches apart if in a single row. Runner beans need a tall six foot framework of support using bean poles or canes spaced six inches apart, usually in a double row 1.5 feet apart with the canes tied together at the top. They will quickly twine around the canes and reach the top. They are very attractive when covered in red flowers. Keep picking both dwarf and runner beans as they are ready and use fresh or freeze surplus for use later. Tendergreen is a good French bean and Enorma a good runner bean. 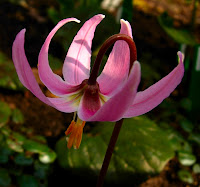 Erythronium is also known as the Dogs Tooth Violet (from the shape of the tuber) and comes into flower in March. The flowers come in a range of colours depending on the species but are all under a foot tall. It is happy in the shade or partial shade and likes moist but not waterlogged soil. Woodlands and woodland fringes are fine where it can enjoy an annual mulch of leafmold or compost as it likes a rich soil. It is best lifted and divided after flowering if you wish it to multiply, though it propagates fairly well from its own seeds scattered close by.