FULL SPEED IN THE GARDEN


FULL SPEED IN THE GARDEN
Last year was the wet year. This year seems to be the cold one, unless that jet stream sorts itself out and we get our summer back. Everything is running about four weeks late. Window sills and greenhouse are overflowing with plants, but every time I start to put plants out for hardening off a frost threatens and they go back to the greenhouse.
The winter garden has now had its day, so all the cornus and salix have been chopped down to the ground. This will give uninterrupted views of the flowering bulbs planted in the bed, and the cornus and willow will soon regrow from the stool as if nothing had happened.
Spring flowers are giving a good display, though winter pansies and Iceland poppies are very slow to grow. Tulips, hyacinths, daffodils and narcissi are looking great planted all over the garden and on my allotment. Wallflower provides the bright splash of colour as well as a lovely scent. 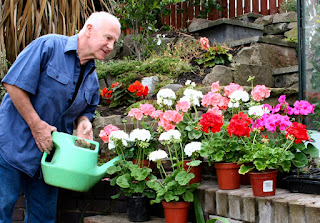 Apples, cherries and plums are starting to blossom so potential crops show a lot of promise, but peaches and pears are not looking good with very few flowers evident at this moment. Most fruit bushes are not yet in flower except saskatoons which are covered in white flowers. On the allotment the ground is still cold but it is time to be sowing and planting a lot of vegetables.
Those that have been sown need hand watering as the ground is quite dry.

On the allotment
Sowing has continued while the soil is dry, but a wee bit more warmth would make a big difference.
Lettuce, radish, spring onions, beetroot, turnip and parsnips are now all in. My first sowing of peas Feltham First is in with another later sowing of Kelvedon Wonder planned to give me a succession of crop. Pickling onion Paris Silverskin has been sown as I have not tried that variety for years.
Most of my cabbage, cauliflower, kale and sprouts are still growing strongly in pots so I get a sturdy plant before planting out. Onion Hytech seedlings are still in a cellular tray but will be planted out soon once the ground warms up a bit better.
Fruit bush prunings as well as garden tree prunings have now all been shredded and added to the compost heap, but it could do with some rain to wet it and help it to rot down quicker.

Harvesting continues
Swede turnips, leeks, and Swiss chard are still giving us freshly picked crops to eat, though the chard only lasts till it runs to seed in a few weeks time. The winter salad leaves sown in an old used growbag is now outside and still gives us fresh leaves and now some radish which had overwintered. Rhubarb is at its best just now with brightly coloured stems on my Timperley Early.

In the greenhouse
Sweet corn has now been potted up and I will grow it on under glass for another fortnight before hardening off for planting out at the end of May. I am in no hurry as the ground where they are to go has a green manure crop of red clover growing.

Pumpkin and courgette seed has now been sown.
All geraniums, fuchsias and chrysanthemums have are now being hardened off outdoors.
Grape vine cuttings taken as short one or two bud sticks have now rooted and are being potted up.
Garden flowers including Cosmos, Livingston daisy, African marigold and Lobelia were sown in cellular trays are now bulking up.
The existing grape vine rods which were lowered down to encourage even growth have now been tied back to their supports as bud break is good and even. We now have to wait to see how many grape bunches appear, so all side shoots are allowed to grow for the time being. Once I can see a decent crop of bunches I will remove all sideshoots that are barren.
Jalapeno peppers are now planted in a growbag awaiting warmer weather to boost growth.
Tomatoes grown from cuttings from one of last years successful plants came through the winter just fine and got a really good head start. They went into growbags in the middle of April and are now flowering on their second truss, with small tomatoes forming on the first truss.
Tomatoes, Alicante and Gardeners Delight sown this year are only just big enough for planting out now into growbags. It has been a struggle to plant them in my overflowing greenhouse as I still have a lot of plants such as tuberous begonias trying to put on some growth, but held back by cold weather and lack of sun.

Doronicum is a small low growing herbaceous perennial which flowers in late spring with a mass of golden daisy shaped flowers. They associate very well with blue flowering plants such as Anemone blanda and Pulmonaria as well as dwarf early red tulips. Plant them in good soil which holds moisture in sun or partial shade. They are easy to propagate by dividing up the clump in autumn.