THE PRIMROSE FAMILY
Primulas in one form or another played an important role in a gardeners apprentice training in the sixties. Primula obconica was grown indoors as a house plant or for civic decorations. Primroses, (Primula vulgaris) and cowslips, (Primula veris) grew wild in meadows, banks and roadside verges. 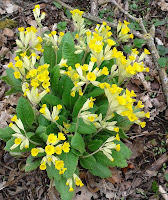 The Dundee Parks Director, Mr A. Dow at that time, established a Primula garden in Camperdown Park in amongst mature trees so the plants enjoyed dappled sunlight and a woodland moist soil. These beds were made up with plenty of well rotted leaf mould forked into the topsoil. There was never any shortage of leaves to compost at Camperdown as in autumn the whole park was raked for leaves which were then heaped up to compost over a few years. This suited the wide range of Primulas grown including the orchid primrose Primula vialii, the candelabra primroses Primula bulleyana, the Himalayan Primrose, Primula sikkimensis and the drumstick primula Primula denticulata which locally is also called the Kirrie Dumpling. This still remains a very popular primula in cottage gardens all over Scotland.
Older gardeners still talked up the merits of the auriculas, (Primula auricula) which had become a fashionable plant to grow in their time. 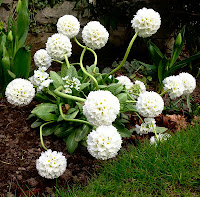 Plant collectors brought back species from all over the world from Alpine habitats subject to wind, snow, frost and degrees of dry and wet atmospheres, then China gave us those more suited to glasshouse and house conditions for flowering pot plant use. Other species preferred bog gardens and damp atmospheres. There are nearly 500 different species of primulas.
Plant breeders such as Blackmore and Langdon in Bath, have been hybridising primulas for years producing very colourful polyanthus and primroses suited to the bedding plant trade for use in tubs and beds for both private gardeners and civic decorations in parks and open spaces. 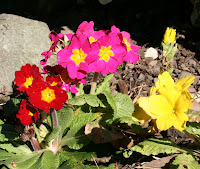 Polyanthus Crescendo is one of the best bedding plants in this group with a very wide range of colours with large heads held up high on strong stems. For lower growing almost ground hugging plants the Primula Wanda has been bred to retain its dwarf appearance but now has a wide range of colours. Other Primulas for bedding now include rosebud shapes in pastel shades with scent, double flowers and bicolours.
Bedding polyanthus are so colourful they do not need any bulbs interplanted between them to brighten up spring displays, but if you wish to go for maximum effect dwarf double tulips are a perfect combination. So are hyacinths and crocus, but careful you don’t go for an overkill.

Polyanthus are fairly easy to grow provided you give them the right conditions. I sow seed in late spring outdoors in a cool but sheltered place. Warm temperatures will inhibit germination, and they must never dry out. Seedlings are slow to germinate, so be patient and allow a few weeks for the seedlings to grow before pricking out into cellular trays. Grow them on for another couple of months then line them out in prepared soil spacing about four inches apart. Make sure the soil has plenty of compost incorporated as they like a rich moist soil. Young plants should grow strong and sturdy so that by October you have perfect plants ready to plant in your beds, borders and tubs.
Plants flower from late winter if mild conditions prevail till early summer. Once the plants have finished flowering you can discard them onto the compost heap, or save them for another year as they are perennials. Carefully lift them and line them out on humus rich soil spacing about four to six inches apart. Make sure they are always kept moist and by autumn they will be ready for bedding into your tubs and borders for the next spring displays. 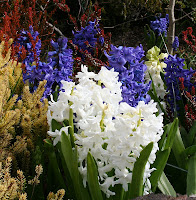 Hyacinths may be more expensive than other spring flowering bulbs, but they give great value and with care can come up again every year in the garden. They have large flower heads, great bright colours and a gorgeous scent. I usually buy them in each autumn for spring flowering tubs mixed with pansies, myosotis or polyanthus. However they can also go into pots for forcing to provide colourful scented flowers for the festive season or early winter. After flowering keep them watered, fed and growing till summer then dry them off and in autumn plant them in a sunny spot in the garden. If the soil is good and well drained they will flower again every year in spring. I replant mine in gaps in the herbaceous border and amongst heathers where spaces appear.
Jan Bos was always my favourite red, Pink Pearl a great pink, L’Innocence the best white and for a good blue it is hard to beat Delft Blue and Ostara.