A GOOD YEAR FOR FRUIT?


A GOOD YEAR FOR FRUIT?
If flower quality and quantity is any judge of fruiting potential then I am in for a bumper year of apples, a good year for plums, blackcurrants, red currants, gooseberries and saskatoons, but pears and peaches are having a rest this year. Threatening them with severe violence just did not work this year. The peach had four miserable flowers, and the recently grafted pears had six flowers on a Beurre Hardy graft, but all the other grafts have nothing but very vigorous growth. However my outdoor grape Solaris is showing a few grape bunch initials so all we need now is a return to some brilliant summer weather like what we expect with the promise of global warming so the bunches can grow and ripen up.
Rhubarb has been fantastic as it seems to like this damp cool weather, so we pick, eat and freeze the abundant stems as they grow.

I have never seen such a massive amount of flowers on all my apple trees from the early Oslin to the late Red Devil and Bramley cooker. They look fantastic and being so late there is no problem with flying insects around to pollinate them. 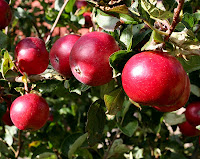 The old Victoria plum tree finished flowering a few weeks ago. There was only half the normal show of flowers but one solitary bee worked his socks off over four days pollinating all the flowers. Bees have not yet sussed out flexible working, overtime rates, unsocial hours or bank holidays.
If only I could find some way to reward him for his dedication.
Cherry Cherokee had plenty of flowers and now has excellent growth with no sign of blackfly which often attacks young growth tips causing them to curl up and distort.
The poor show of flowers on my outdoor peach Peregrine and pear tree could be caused by last years long cold sunless weather which prevented autumn ripening up of young shoots and formation of new fruit buds.

Gooseberries are looking brilliant with plenty of small berries, very healthy growth and no sign of sawfly, but I will check regularly as they are bound to appear soon. I will pick them off and crush them as soon as spotted before they build up to plague levels and defoliate the bushes.
Red and blackcurrants are also showing great fruit potential, but I will keep an eye out for greenfly which attack the growing points. Cuttings taken of the new large fruiting Big Ben variety are shooting just nicely and they all wanted to give me an instant crop of berries, but I had to resist so they are all stripped off to let the plants concentrate on vigorous new growth. 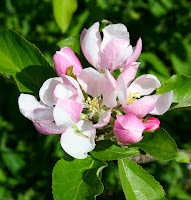 Saskatoons have just finished flowering but there was not as much as last year. I am putting this down to poor autumn ripening of young shoots. I just hope the smaller crop results in bigger fruit as there will be less competition.
Blueberries suffered a fair bit of dieback over winter, but there still seems to be a decent crop to come. Again it could be poor autumn ripening of shoots followed by cold wet soil over winter.
Raspberry Glen Fyne is my new variety replacing my Glen Ample wiped out by the root rotting fungus phytophthora. However they were planted on new land as phytophthora stays in the soil a long time. New cane growth is promising and older shoots retained from last year will give me a few berries to sample.
Strawberries are in full flower so crop potential is high, though last year I also had a huge crop, but lost most of it as the wet weather caused the fruit to rot on the plant. My strawberry Mae under low polythene tunnels is a fortnight ahead of Mae in open ground and the tunnels will give the fruit some protection from wet weather.
Grape Solaris on a south facing fence is now in leaf and has at last produced some young bunches. Time will tell if these will ripen up.
My mature Brant is only just breaking bud so too early to judge cropping.
New varieties Rondo, Phoenix, Regent and Siegerrebe are in growth and showing a few bunches. These should be removed to allow the plant to establish good growth in the first year, but I am very tempted to allow a couple of grapes to develop just to see how they perform up north.

Robinia frisia can be a spectacular small specimen tree with golden foliage from spring till autumn, but it needs really good drainage especially in winter as it does not like cold wet soil.
I have had my tree growing happily for ten years, though last years wet weather and this year’s cold summer has got it struggling a wee bit. However it is well worth persevering with it as it is an eye catcher in summer. Remove any die back of young branches as they are liable to coral spot disease if left on the tree when young.