BUSY TIMES
The summer came at last, the rain went off and with warmer weather we got the chance to catch up with planting and sowing. However it was necessary to get the hose out and make sure young plants and seedlings did not suffer from the dry spell, but then once the ground was sufficiently moist the sun disappeared and the rain came back again. What the weather will be like when this appears in print ten days later is anybodies guess, but I am hoping for a return to summer.

Overwintered Swiss chard runs to seed in spring so after a final harvest of young leaves the plants were dug up and added to the compost heap. The last of the winter Swedes were lifted, and leeks were finished a few weeks ago, so there was a fair bit of soil digging to do before the next crops can be planted. Land kept for sweet corn, courgettes, pumpkins, French beans and a later sowing of peas had been sown down in early spring with a green manure crop of red clover. This made excellent growth but it does not grow tall like mustard so it was easy to trample down and dig in. Clover has nitrogen fixing bacteria on its roots so adds food to the soil when it rots down.
Some garden compost was added while digging as all these crops like a rich soil full of humus. 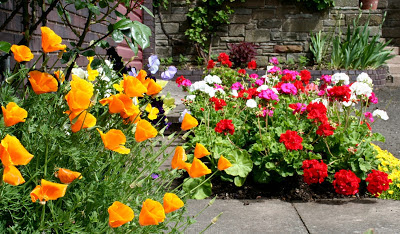 Peas, lettuce, radish, beetroot and spring onion continue to be sown for continuous cropping.
Swede Gowrie (clubroot resistant), cabbage January King and Swiss chard Bright Lights were sown as well as wallflower and myosotis for flowers for next spring. Some seed suppliers should really look after their customers a bit better if they want repeat business, A packet of Swiss chard seed was so sparse that it only sowed a four foot row. A normal allotment row is about twelve feet or more.
The first harvesting has started with radish, lettuce, spring onion and spring cabbage and I hope to have my first strawberries before this goes into print. The strawberry patch has had a deep covering of straw up the rows to stop soil splashing onto the young fruit as they develop.

Cabbage, cauliflower, kale, courgettes, pumpkins and sweet corn all got planted. The brassicas needed protection with nets for pigeons, and dressings of perlka fertiliser for clubroot. Carpet underlay squares are used under each plant to guard against rootfly maggots, but slugs just love to hide under them to slug pellets are a necessary evil. I was too late with some new plantings and some plants got attacked with about twenty maggots per plant. Fortunately I grow spares to replace lost plants. The battle continues.
On another battle front I pick off numerous sawfly maggots from my gooseberries every other day, but there is always more in reserve for another day. However the bushes look very healthy and the crop looks excellent and black and red currants are also looking fantastic.
Earlier sown peas germinated strongly and have now been supported with wire netting, and also netted to protect them from pigeons.
In the greenhouse Jalapeno peppers are now flowering and looking good. Tomatoes are also in flower and sideshoots are removed from the main stem as they form. Black Hamburg grapes are full of bunches on most sideshoots, but only a few on Flame and none on Perlette. Pruning sideshoots at one leaf on all grape plants is done at least twice very week.
Bedding geraniums, tuberous begonias, marigolds, petunias and lobelia have been mass planted all around the garden and allotment to give us a wealth of summer colour. Shirley poppies on the allotment from earlier spring sowing and Iceland poppies sown last year are all now in flower.
One border planted with tall scented lilies has had an intercrop of pumpkins as I had a few spare plants. They should be quite happy together as they occupy different height needs.

Delosperma nubigenum also called the yellow ice plant is an evergreen fast growing succulent ground cover plant. Give it the right location in full sun in well drained soil even poor stony soil, and it will smother itself in yellow flowers in early June. When summer appeared in early June for nearly a whole week the Delospermas went crazy with flowers and there was hardly any green shoots visible. The plant was a solid block of golden yellow daisy flowers.
It is also great as a plant to push into crevices in south facing garden walls where it will root and look after itself. Propagation cannot be easier as all you need to do is pull a few shoots off and stick then anywhere. They always root easily.