PERFECT GARDENING WEATHER
This unusually brilliant summer reflects my first summer as an apprentice gardener in Dundee Parks Department in 1959. We had three months of very hot weather from June till early September with no rainfall, but then the heavens opened up and Dundee got a wee bit of flooding. I never forgot that summer heatwave as I was more used to Scotland’s normal three day summer record.
The new Courier magazine is a new beginning, so although many of the Courier readers will be familiar with my column, my garden and allotment I thought it might be of use to give a wee bit of background to John Stoa, the “Courier Gardener” to understand where all the gardening came from.

My father always encouraged me to do a wee bit of gardening as a young kid. I got the digging and weeding, he did the sowing and planting. I got the gardening bug, so when I left school in 1959 I went for a gardening apprenticeship which lasted six years with Dundee Parks dept. I was very lucky as the Parks were full of very experienced gardeners who had been trained in private service but after the war there was no work left for them so they came to work in Dundee parks, nurseries and greenhouses. We got training in every aspect of gardening from growing fruit and vegetables, glasshouse crops, trees, shrubs, roses, flowers, lawns, propagation, sports and hard landscaping. At fifteen I got my first allotment on the Law Hill and really enjoyed allotment life, though I was very much the learner. I then had a spell at the Scottish Crops Research Institute in Invergowrie studying weed control on fruit and vegetables. After getting married in 1968 I travelled south to Sussex to work on a fruit farm before going to college in Essex to study for my National Diploma in Horticulture. A year later I was manager on a fruit farm near 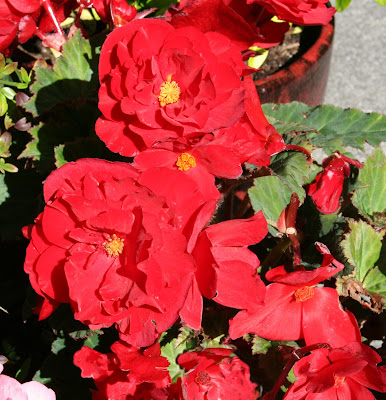 Worcester, but later went back to Parks work in Dudley. It was here that I took the role of allotments officer for the area. I moved on to Darlington in the late seventies and managed to get a massive allotment about 500 square metres. It took a lot of looking after, but I was younger then. After about ten years I moved back to Scotland to Livingston, and then returned to my home town of Dundee.

You have to leave Dundee and experience other parts of UK before you realise what a great place it is. We are close to fantastic Scottish scenery, clean beaches, vibrant towns, friendly residents, great pubs, good social life and even the weather is no bad in most years.
If this year’s weather was to become normal as we embrace global warming who needs to go abroad for their holidays, and in the garden I could successfully be growing figs, cherries, peaches and outdoor grapes.

Flowers put on a better show in a good year, and this year roses, begonias, geraniums, sweet peas and lilies have just about flowered themselves to death. Dead heading has been a big job to help plants to keep flowering.

Fruit crops have never been more prolific and apples and plums have both got drooping branches weighed down with developing fruits. Black currants and gooseberries gave me huge crops, now either in the freezer or brewing away quite happily in a demijohn.
Figs are plentiful, but need a dry warm spell in late summer to ripen up the fruits. 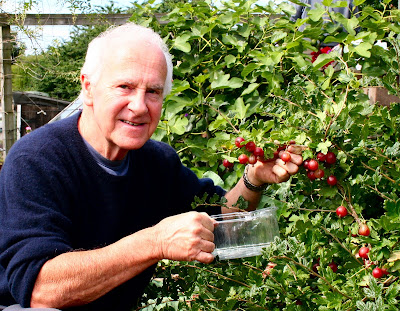 Vegetables are also having a great year with brilliant cauliflower, cabbage, turnips, salads, broad and dwarf French beans and any amount of large beetroot. Only failure this year is my onions which are all suffering from white rot. I put this down to continual watering during the dry spell as they would have been ok as they are quite drought tolerant. My good deed turned out to be a bad idea.

Greenhouse tomatoes, peppers, cape gooseberries and grapes are all happily growing together with vents fully open as well as the door most days; otherwise it would get too hot for healthy crops.
My best tomatoes have been Alicante and Gardeners Delight, both which are very heavy with huge trusses of ripening tomatoes and grape Black Hamburg has numerous bunches ready to ripen in early September. Red seedless Flame grapes are beginning to ripen now.
Jalapeno peppers have a great crop, but although they can be used green I am waiting till they turn red but as yet there is no sign of that. 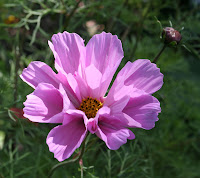 Cosmos is a very useful half hardy annual which can be sown direct outdoors or sown in a glasshouse in late March then pricked out into cellular trays. Harden them off for planting out at the end of May or early June. They can grow quite tall so give them plenty of space. They do not need soil that is too fertile and do not give them fertiliser or they will grow huge at the expense of flowering.