SOME LIKE IT HOT
Peppers in some form or another have been cultivated and eaten for thousands of years. We are all familiar with the sweet pepper known as the bell pepper as we eat it fresh in salads or cooked in numerous dishes very frequently. However hotter peppers such as cayenne, chilli, Thai peppers, Jalapeno, Habanero, Scotch Bonnet and if you like it dangerously hot Dorset Naga are all very healthy. They also add a bit of spice and heat to a wide variety of dishes in curries, as paprika, Tabasco, or they may be dried, ground or pickled.
The active ingredient in hot peppers is capsaicin and the amount present varies according to type grown, method of cultivation and climate.

The hottest parts are the seeds and central membrane that holds the seeds. A method has been established to determine the strength of heat in the chilli. This is known as the Scoville Heat Units. The sweet pepper counts as zero, Jalapenos have 2.5 to 10 thousand SHU, the cayenne has between 30 to 50 thousand SHU, Thai peppers have 50 to 100 thousand SHU, Habanero and the Scotch Bonnet has 100 to 350 thousand SHU. The Dorset Naga was top of the hotties at well over one million SHU, but this has now been overtaken by the Trinidad Moruga Scorpion at two million SHU.

The hottest types are also the source of capsaicin extracted from chillies and used as non lethal pepper sprays by police for crowd control. 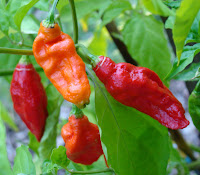 Take great care in handling the hottest fresh chillies as the sap can cause severe burning of hands, eyes, lips and other parts of the flesh in contact. Wear thin rubber gloves and thoroughly wash all knives, utensils and cutting boards after use.
Always thoroughly wash all kinds of peppers as they are mainly grown in countries that are still using high levels of pesticides that adhere to the surface of the fruit.

Peppers may be picked green or left to ripen and go bright scarlet, though this often reduces the amount of fruit produced. The red fruits are very high in Vitamin C, vitamin A, and most of the vitamin B range, as well as the minerals potassium, magnesium and iron. If you can build up a tolerance to hot peppers they are recognized with excellent health benefits. Studies indicate they are useful in treatment of arthritic pain, reduces blood cholesterol, and the peppery heat can reduce nasal congestion. Capsaicin studies are also helpful in stopping the spread of prostate cancers.

The plant thrives in hot climates like South America, Mexico, India and Thailand, so up in Scotland we need to grow them in a glasshouse.

This year I have been growing some Jalapeno peppers, but the cultivation of other types is very similar. Only tall varieties may need staking or some form of support. My Jalapenos are now five foot tall bushes that seem to be fine without any support but as the fruit swells I will support any shoot that looks likely to bend over with a heavy crop. 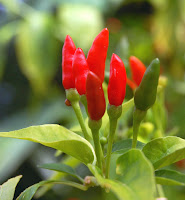 Seed was sown in mid March in seed trays on a windowsill. Young seedlings emerged in a few weeks then were pricked out into small pots and kept on the sunny windowsill. These soon grew and needed potting up into larger pots. Once established they were transferred into the glasshouse in early May and three weeks later planted into a growbag at three per bag. They can also be grown direct into borders that have been well prepared by incorporating ample well rotted organic matter. Peppers benefit from high temperatures and ample sun so they are on my south facing border in the glasshouse.
Keep them watered and fed once a week with a high potash feed just like tomatoes.
They can get troubled with red spider, greenfly and whitefly, but so far I have had no problem.
Keep them well ventilated to build up a strong plant and start to pick the fruit when green or wait a bit longer till they turn red.

Fuchsia Mrs Popple has always been my favourite hardy outdoor fuchsia. It will grow about three to four foot tall and gives a mass of flowers from early summer till winter. It is not fussy about soil as long as it has good drainage. I grow mine at the top of a wall in a bed with variegated ivy ground cover. This gives the base of the fuchsia some frost protection in winter. If the winter is severe the bush can die back to ground level, but it always seems to survive and grow away strongly again in spring. Once growth has started in spring cut back all dead shoots to tidy up the bush. It propagates very easily from cuttings taken in late summer, but needing winter protection, so I keep mine on a windowsill.