GOOD TIME FOR PRUNING
Most fruit bushes and trees can be pruned any time in the dormant season from now till mid March. I tend to keep this task for times when it is frosty or there is a snow covering and other outdoor tasks are curtailed. As long as you wear plenty warm clothes cold should not be too much of a problem. Pruning of raspberries, currants, gooseberries, saskatoons, brambles, outdoor grape vines as well as apples, pears, peaches and cherries can all be tackled, but don’t prune the plum trees. There is always a risk of infection from spores of the silver leaf fungus so leave them till late spring.
Prunings can all be shredded then added to the compost heap as they will rot down in time, when mixed with other plant materials such as leaves and grass clippings. 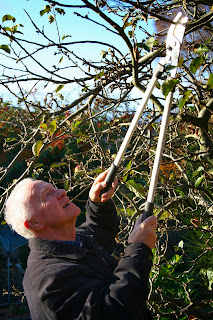 Pruning of apples and pears depend on type of tree grown whether it is a bush, or one with a restricted growth such as spur pruned stepover, fan, cordon or espalier. The first priority is to create the basic shape of tree, then after that has been achieved pruning is done to encourage a balance between good growth and fruiting.
Trees can be grown as standards or bushes where height is kept down so picking can be done without ladders or climbing up the tree. I prune my young trees with secateurs, but my large mature Bramley apple gets pruned with loppers and a saw. Keep branches well spaced to allow plenty of light in to ripen up developing fruit. Any branches growing upright or too tall are cut back. This encourages fresh strong growth which then gets thinned out. Remaining branches are then allowed to fruit for the next three to five years before they get too big and have to be cut down. However always make sure the tree has a good wine glass shape overall.
Restricted growth trees get spur pruned in winter cutting back most young shoots to a few buds from their base. These would previously have been summer pruned to ripen up the shoots. Where ever growth requires to be extended the leading shoots should be shortened by about a third of their length. 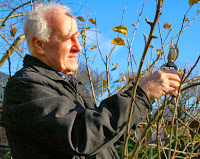 If blackcurrants were not pruned immediately after picking they can be done now by removing old wood which has fruited cutting it back to a young shoot lower down the bush.
Redcurrants are spur pruned cutting all shoots to a couple of buds and leaving a framework of about eight main shoots. These are replaced over time with new shoots.
Gooseberries are also spur pruned, but first remove any low branches near ground level as well as those growing in the middle of the bush. This will assist harvesting on those bushes with vicious thorns determined to cause a bloodbath to pickers hands.
Summer fruiting raspberries have the old canes cut out to leave this years young canes which will crop next year. Autumn fruiting raspberry canes are cut right down to a few buds at ground level.
Saskatoons only need a few tall shoots to be removed to ground level so they can send up fresh shoots to fruit for the next four to five years. 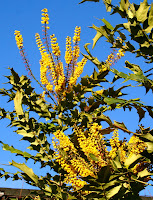 Mahonia Charity is also known as the Oregon grape is a very hardy evergreen shrub growing ten or more feet tall in time. It produces clusters of long racemes of yellow flowers in late autumn and into winter. They are said to be scented, but I cannot say perfume is one of their strong points, though the bright yellow flowers are very welcome in November and December.
Mahonias are very popular as ground cover as they will smother out most weeds, and height can be managed with occasional pruning of straggling shoots in spring after flowering.
They are very easy to grow as they like most soils and will be just as happy in shade as in full sun.