MARVELOUS MAPLES
Maple trees are probably the most widely planted trees in UK. The Romans get the blame of bringing over the sycamore which has naturalised itself and can be quite a weed nuisance. They all grow very well in our soils and just love our climate so are very favoured in Parks, country estates, woodland fringes and shelterbelts, highway street avenues and gardens. The smallest are used in bonsai culture producing brilliant miniature specimens but still retaining their dazzling autumn colour. The field maple, Acer campestre and many forms of Japanese maple, Acer palmatum are often selected for bonsai.
Larger specimens include the sycamore, Norway maple, sugar maple and silver maple. These maples are extensively grown in Canada where their autumn colour is legendary. The sugar maple, Acer saccharum is used for maple syrup as the sap has a high sugar content. The sap is extracted by tapping with a tube just under the bark and collecting it in containers. However it contains a lot of water which has to be boiled off. It takes 40 litres of sap to produce one litre of syrup, thus it is not a cheap product, but very tasty.

Medium sized specimens include numerous types of Japanese maples and those grown for their ornamental bark. Most have fantastic autumn colour, some brilliant spring foliage and some very colourful young shoots in spring.

Maples for large gardens and parks

The sycamore, field maple and Norway maple are very common everywhere but both the silver maple, Acer saccharinum and sugar maple, Acer saccharum are well worth planting, but my favourite is Acer cappadocicum rubrum which has scarlet shoots in spring as well as brilliant autumn colour. Another excellent large maple is the red maple Acer rubrum with fiery scarlet foliage in autumn.

Many of the large maples have columnar forms which can be used in smaller gardens.
Smaller maples grown for their ornamental bark include Acer grosseri hersii known as the snake bark maple with green and white stripes up the trunk. Another small maple grown for its pink and white striped bark has the unfortunate name of Acer pensylvanicum erythrocladum, though better known as the Coral Striped maple. The paper bark maple Acer griseum, with flaky cinnamon coloured bark has scarlet crimson leaves in autumn.

Maples for the smaller garden

There is a small popular sycamore, Acer psuedoplatanus Brilliantissimum which has outstanding shrimp pink foliage in spring, but then it slowly greens up and is a lot less attractive. 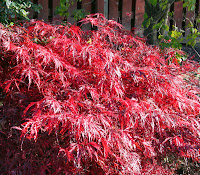 However Japan has given us hundreds of varieties of dwarf maples suited to every garden, though by no means a cheap plant. Spring leaves vary from pale green to golden and maroon, but in autumn they turn golden, orange, scarlet and deep crimson. Most are varieties of Acer japonica or palmatum with my favourite the older form of Sango Kaku the coral bark maple. This form has very attractive foliage all summer which goes deep golden in autumn before falling to reveal fiery scarlet stems which retain their colour all winter. 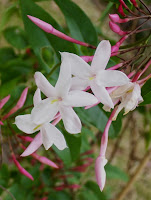 Scented Jasmines. In the garden we grow the yellow winter flowering Jasminum nudiflorum which can be a vigorous climber. However for the sheltered garden the summer flowering Jasminum officinale is very welcome with small white but very attractive and highly scented flowers. It is also a vigorous climber, and can be quite hardy in most winters, but unfortunately a very hard winter can kill it.  At this time of year the shops and garden centres have plenty of the scented pot plant, Jasminum polyanthum. It has pink buds that open into starry white flowers with a heavenly perfume. It is often twined around a small basket and although sold as a small plant it will grow a lot bigger in time. Jasmines are very easy to propagate from cuttings or layering.

Painting of the month 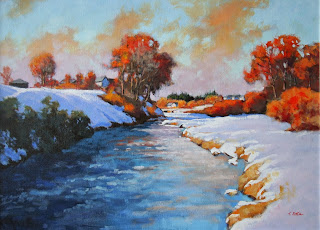 Dighty Burn at Downfield is a winter landscape showing Dundee’s Dighty Burn from Downfield looking up past Pitempton Farm towards Bridgefoot. It was a very relevant scene to paint for me as I was born in that area where, in early childhood, we would go to roll our Easter egg, before people discovered the Den O Mains. Camperdown Park is now the in place at Easter, so it has been captured on canvas as well.
These paintings and many others can be seen in my studio at Menzieshill Road, Dundee in my Winter Exhibition running from today till Sunday 8th December, open every day from 11am to 5pm.