Tomatoes just love my new greenhouse. It was built on the foundations of the previous one blown down in last December gales, but was a lot stronger and also taller. So tall that I couldn’t reach the ventilators so I had to raise the central path and back fill the borders with a mixture of good top soil and Discovery compost. I planted my tomatoes direct into the soil after giving them a decent dressing of fertiliser. They will be a lot happier in fresh soil rather than growbags and the tomatoes should be a lot healthier with access to a soil based growing medium with plenty of nutrients and micronutrients. However I still give them a feed twice a week. 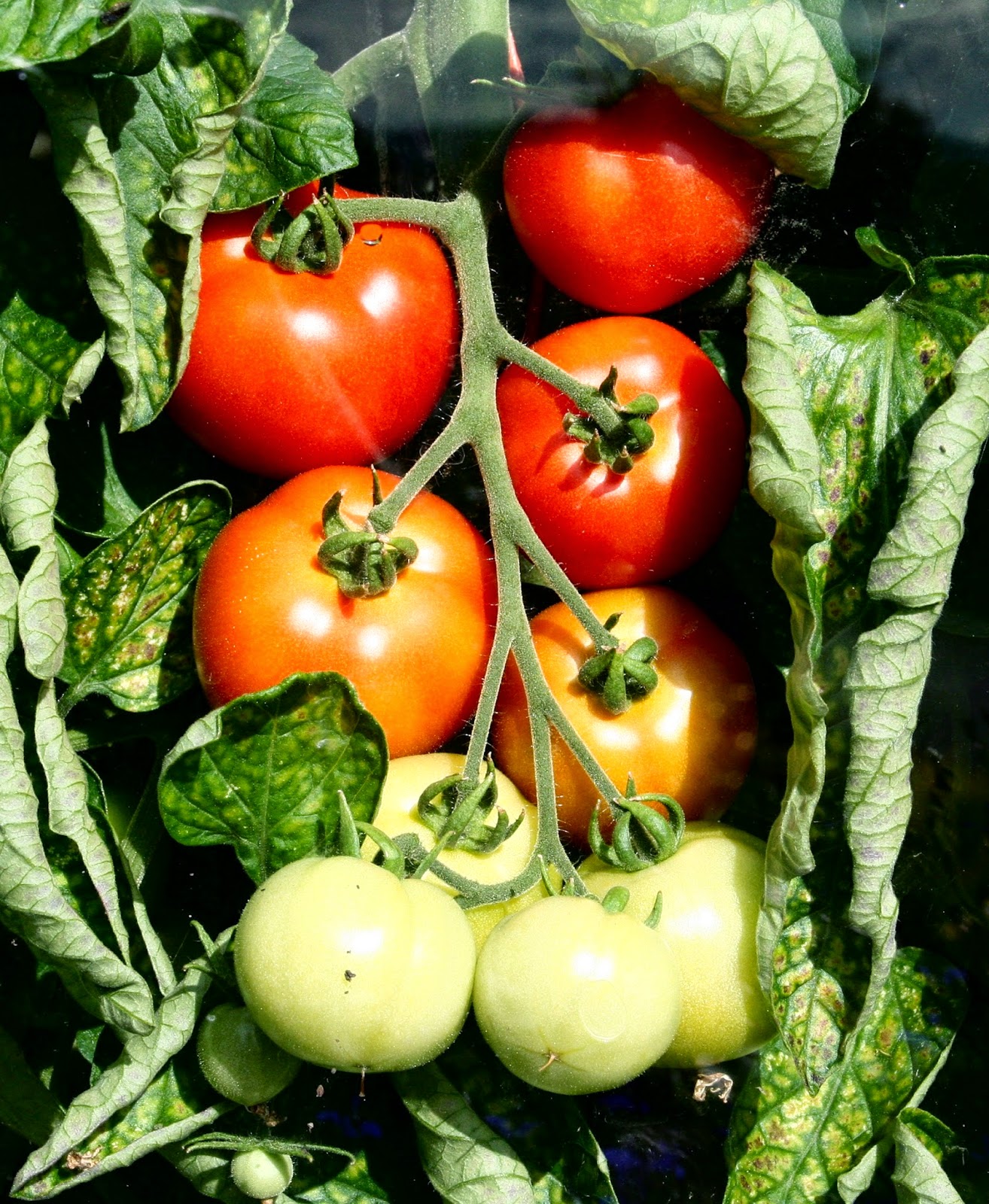 The plants soon grew away fast and furious so I had to stop them after seven trusses when they reached nearly seven feet tall. Normally we remove the lower leaves which begin to die off and this also helps watering, but this year they have all been very healthy so I have been very selective in leaf removal as it is the leaves that feed the bunches of tomatoes.
Alicante has again been brilliant and gardeners delight still a great cherry tomato. I have not been impressed with the new yellow cherry tomato Ildi. It is a very poor cropper and can never compare to Gardeners Delight or Sweet Million which both give lots of sweet but small cherry tomatoes.
It has been great to get back to eating a tasty tomato allowed to fully ripen before being picked.

Grapes are also having a great year with Black Hamburg well ahead of Flame and Perlette for number and size of grapes. Constant training by removal of all sideshoots and now some leaves allows sunlight into the plants and will help the ripening process. Although the old grape vine stems were left outside exposed to the winter from December to March while the old greenhouse was being removed and the new greenhouse was being built it did them no harm whatsoever.
The grapes all got several feeds while swelling up and sideshoot removal meant the plants can direct all their energies into the fruit bunches rather than growth. Flame is now ready for picking. 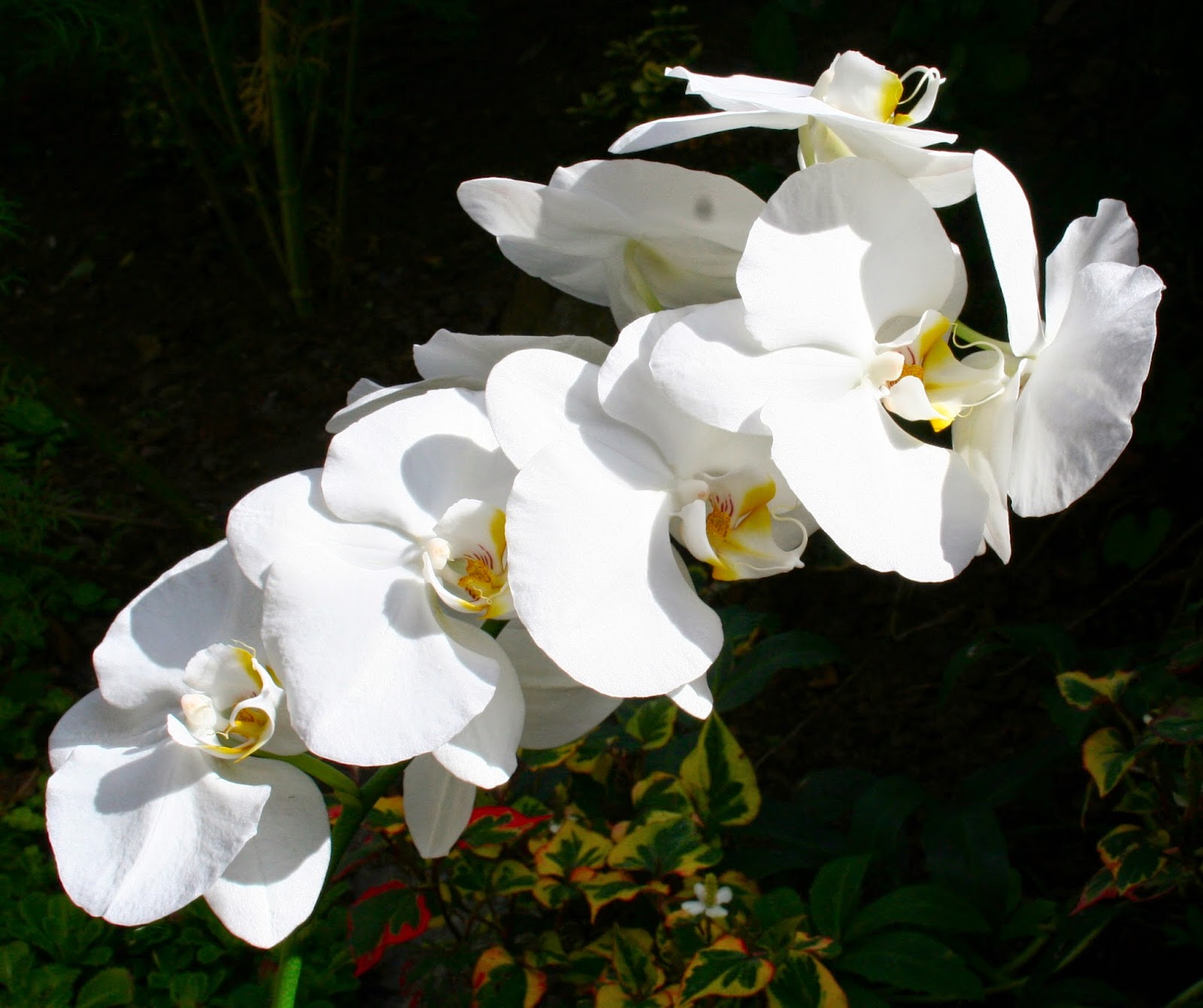 My white Phalaenopsis orchid never lets you down. It can be relied on to flower every year with a huge spike lasting many weeks. It was kept in a warm bathroom where it would enjoy the moist atmosphere and early morning sunshine through the obscure glass windows. The plant had grown quite far out of its pot so it got repotted in spring with fresh orchid compost after removing a lot of old roots but keeping the crown out of the compost as well as many of the aerial roots.
It soon put on a couple of new leaves then the flower spike.

Other house plants are now quite dormant as my Christmas cactus (Zygocactus) has had its period of summer growth so is now into drying out induced dormancy. It will get a periodic watering no more than every six weeks to keep it alive. The next watering will be when the flower buds appear in early winter. My Amaryllis has also had its summer growth period and is now being dried off to ripen up the bulb to induce good flower spikes for flowering in the winter. The bulbs have divided into several smaller bulbs but these were encouraged to grow so I can get several flowering spikes from one large plant.

Peach Peregrine is quite a challenge outdoors in Scotland. It really needs a very sheltered spot on a warm wall facing south. It will grow into a small tree, but growth can be restricted by training into a fan shape against the wall and spur pruning. Spraying against peach leaf curl has not been very effective. Peaches flower very early but still need pollinating. Hand pollination is necessary as there are very few bees around at that time, but then a period of decent warm weather is required for the pollinated flowers to fertilise successfully. Three years ago my outdoor peach gave me a dozen peaches, but last year and this year only one fruit made it to harvest.
I will persevere with them but they really need a bit more global warming.