PRUNING FRUIT TREES AND BUSHES
We seem to have a very favourable climate in the north east of Scotland. We may get the gales in winter but we have missed out on the rain and snow, and only enough frost to firm up the ground. As longer sunny days arrive it gives us the perfect opportunity to crack on with any outstanding pruning jobs while plants are still dormant. I do a lot of pruning of fruit bushes pretty soon after harvesting as this gives new growth time to ripen up before winter. I also like to carry out all my pruning at the one time then I can put all the clippings through our allotment shredder and add them to the compost heap.
Raspberries (summer fruiting) fruit on new canes produced the previous year, so remove all the old fruited canes down to ground level and tie in those left. If there is plenty canes available remove weak ones, short ones and any overcrowding ones so those left can be spaced at four inches apart along the top wire.
Raspberries (autumn fruiting) have all the canes cut down to the ground as they fruit on new canes grown in the same year. 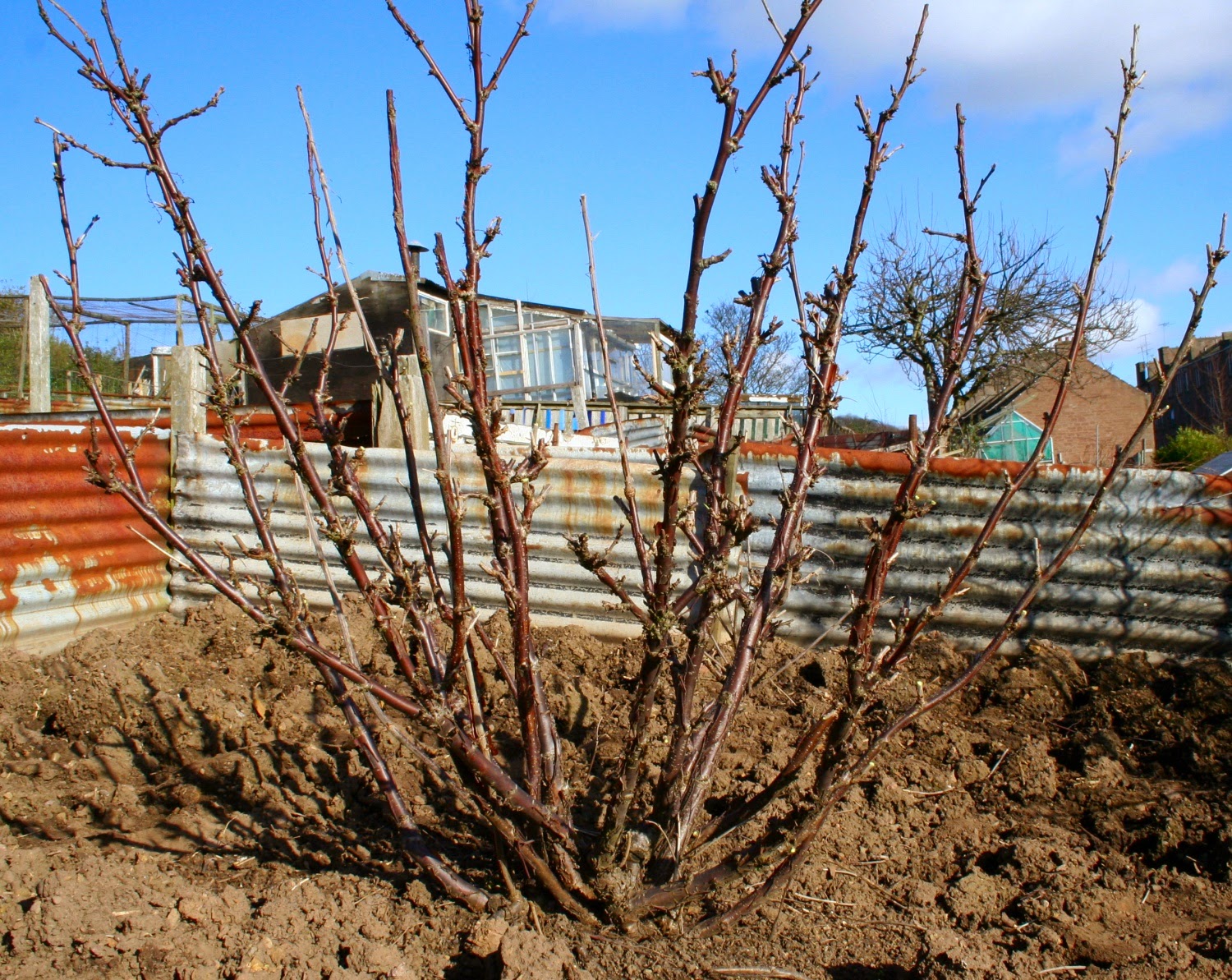 Redcurrants have their own style of pruning. I establish a framework of about nine main shoots which I summer prune by cutting all sideshoots back to about six inches or so, then in winter I spur these back to a couple of buds. Try to replace a couple of these main shoots every year with new strong shoots grown from the centre of the bush.
Brambles, loganberries and Tayberries are all treated the same as summer raspberries, though the canes can be quite long, so sometimes they are woven up and down along their supporting wires to save space. The new bramble Reuben fruits on canes grown the same year similar to autumn fruiting rasps so it is also cut down to ground level.
Blackcurrants have old fruiting wood removed, shoots trailing too near the soil, and open up the centres. Leave all strong young shoots for fruiting for the next couple of years.

Gooseberries are best pruned after fruiting in summer but it is still time to give them a trim now. Most varieties are very thorny so pruning aims to make life easy for picking. Remove growth from the centre of the bush as well as any shoots on the outside trailing down onto the soil. Now spur back weak shoots and any that cause overcrowding, or are likely to impede safe picking.
Plums should not be pruned in winter as this increases the risk of infection by silver leaf disease.
Apples and pears vary in their pruning needs as there are so many different training forms. Bush and tree forms are managed by regulating branches to maintain a supply of young wood that fruits for three to five years and is then replaced by younger shoots allowed to take its place.
Other forms such as cordons, fans, espaliers, stepovers and pillar forms are spur pruned (similar to the redcurrants) in both summer and winter, once the basic framework has been established. 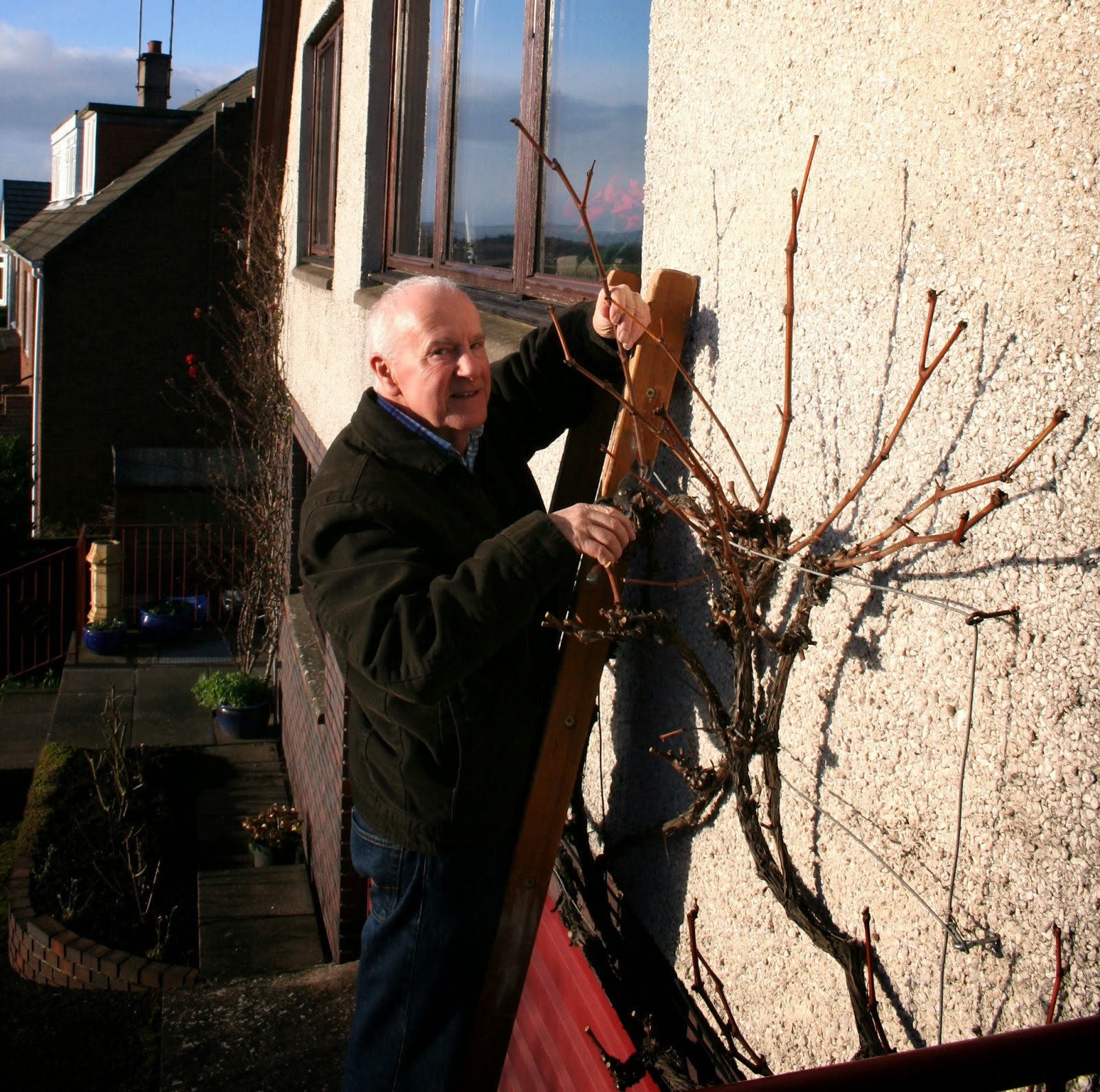 Peaches are usually trained against a south facing wall or fence as a fan shape then spur pruned to control growth and encourage formation of fruit buds.
Grapes grown under glass are usually trained as upright rods spaced about eighteen inches apart. One plant can have one rod or as many as you wish to fill the space. Once these are established all sideshoots growing out of these rods are cut back to one or two buds in December or January.
If pruning is left any later the vine will start to grow and sap will bleed from the pruning cuts.

Wee jobs for this week
Remove all old leaves from Brussels sprouts and put them on the compost heap, otherwise if they build up on the ground they can insulate it from frost. The roots will then still be active whereas the tops could be frozen leading to problems with internal browning of the sprouts.
Pot up small rooted plants of geraniums and busy lizzies, as they begin to grow following autumn propagation from cuttings.
Enjoy aconites as they open up on clear sunny days spreading a bit of golden cheer on cold winter days, but this year well behind the snowdrops that started to flower last December.