A DAY ON THE ALLOTMENT


A DAY ON THE ALLOTMENT
As the risk of frost gets less, we can now start to sow those less hardy vegetables such as dwarf French beans and runner beans direct into the soil, provided we are out of this cold spell and the soil has warmed up. These can also be raised indoors from seed to gain an extra couple of weeks, but I find the later outdoor sowings soon grow rapidly once the warmer weather arrives. I got a bad result two years ago with an indoor sowing of French beans when the poor quality of peat free compost was so bad that all the seedlings rotted off. Outdoors, Dwarf French bean seeds are spaced a few inches apart in a single row and then thinned to four to six inches, but runner beans are planted around the base of a six foot tall wigwam support which they can then twine around.
Broad beans are now well established and starting to put on a bit of growth so now is the time to put in some stakes and twine for support. Keep them weeded and keep on the look out for blackfly on the growing points. Remove the growing points if they are a problem. 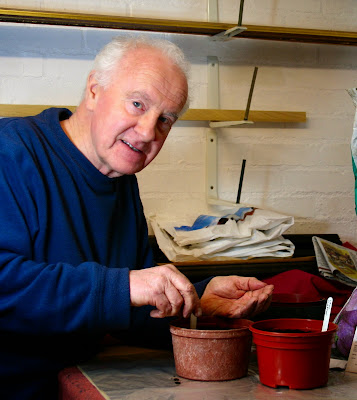 Early peas are also in need of support, even the lower growing Kelvedon Wonder which can reach four feet tall. I use the prunings from my coloured stem border as the cornus and salix get cut back to ground level every year at the end of March. The cornus reached four feet long and the willow (Salix britzensis) grew nearly ten feet last year, so is perfect for staking my peas after cutting back a wee bit. Peas also suffer attacks from pigeons, so I protect them with a couple of rows of black thread. It is an old fashioned trick but still works. Last year I lost my Goji berry which was trained up a six foot fence, so I will now use this fence for a sowing of Pea Alderman which will use the entire fence as it knows how to grow tall. 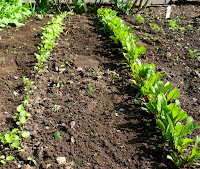 Now that family feeding is just down to two people, there is precious little sense in growing masses of cabbage and cauliflower that are all ready to eat over one month, so I now grow them in small batches over the whole season. The first batch was sown in March and is growing just fine, but now my next batch is ready to succeed them. I will sow a small batch of cauliflower Clapton and cabbage Kilaxy, both of which are clubroot resistant. This will be followed at the end of the month with a sowing of cabbage Tundra to give me my autumn and winter hardy cabbages.
Potatoes are now growing and in need of earthing up, which also helps to kill weeds.
Salads grown under my low tunnels have been giving me some early fresh radish, spring onions and lettuce leaves. They should continue for another month then the ground will be used for another sowing of peas.
Rhubarb has also been very plentiful this year as the long cool but dry spring seemed to suit it just fine. 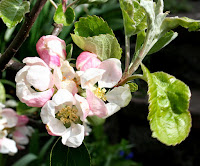 Other crops are all at an early stage but growth has been good on onions, leeks, turnip and now my parsnips are appearing and will soon need thinning out.
Fruit crops are all showing plenty of promise. However I am waiting to see if the cold snap at the end of April has affected the fruit crop fertilisation of apples, pears, cherries and peach.
I keep checking my gooseberries for presence of sawfly maggots, but they are nowhere to be seen.
The ground underneath the bushes has been regularly disturbed then mulched in spring which must have helped to discourage them.

Remove cordon trained tomato sideshoots as soon as they are big enough to handle to retain the plant strength for fruiting, and continue to feed every week with a high potassium tomato fertiliser.
Greenhouse grapes are also grown on upright rods just like a cordon with fruiting laterals growing every ten inches or so up its length. Remove any lateral that is barren and pinch out the growing point on all fruiting laterals at two leaves beyond the fruiting bunch. Thereafter as new side shoots grow keep all of them tipped after just one leaf otherwise the vine will take over the greenhouse at the expense of grapes.