UNDER GLASS
The greenhouse has been straining to cope with young growing plants waiting on a decent spell for hardening off. Dahlias and African marigolds have been out during the day but as our weather forecasters keep threatening us with an overnight frost they go back indoors for protection over night. Geraniums have been hardened off ages ago but cold nights and severe winds have shredded a lot of the leaves. They may look a bit sad, but they are tough and will grow out of it once summer arrives.
A second sowing of cabbage and spring onions were grown under glass, but have now been hardened off and planted out. 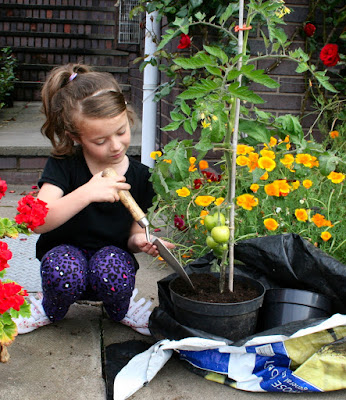 Early spray chrysanthemums have all rooted well and have been potted up so they are also outside for hardening off. They are destined for planting on the allotment to brighten it up and provide cut flower for the house. Fuchsias and Impatiens are still under glass as I don’t want to chance exposure while this cool windy spell prevails.
My sweet corn has been moved outside to harden off as glasshouse space is fully used up with tomatoes planted in one border and tuberous begonias, young geranium cuttings recently rooted and aubergines taking up other borders and paths.
Courgettes and pumpkins grown from seed are coming along just fine but cold winds prevent me putting them outdoors to harden off as my garden is quite exposed to winds.

Tomatoes are again planted in borders hoping I can get another decent crop in really good soil which has had plenty rotted compost added a few months ago. The border also got a dressing of a general fertiliser to get the plants established. I support my cordon grown plants with strong polypropylene binder twine dropping down from heavy duty wires tied to roof brackets. The plants are twisted around the twine as they grow. All sideshoots are removed as soon as they are long enough to break off. The first truss is in flower so feeding has commenced. A few spare plants have been potted up and will be planted outdoors against a south facing warm wall. 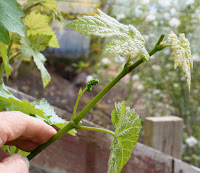 Grape Black Hamburg has now produced small bunches on the sideshoots coming off the upright rods so pruning has commenced. This continues almost every week till autumn, otherwise growth would be rampant at the expense of grapes. It is always worth repeating information on pruning grapes as I see so many unpruned vines taking over greenhouses. Once sideshoots show a wee bunch of grapes let them grow a few inches then nip the ends off leaving two leaves after the bunch. Thereafter nip every sideshoot after just one leaf so it can concentrate on developing the grapes.
I am trying a new grape under glass to see how it likes our Scottish climate. Siegerrebe is not new having been around for over eighty years. This pinky white grape was bred in Germany for wine and dessert use and is said to favour colder climates, so should be very happy in Scotland. I will take a few cuttings and try a plant outdoors once they root and put on a years growth.

Aubergines sown a few weeks ago have been potted up into small pots, but growth has been quite slow as they wait on warmer weather to arrive. This is a new crop for me but we all like to try something different. 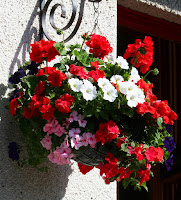 Plant up tubs, hanging baskets and flower borders with summer bedding plants which should now be perfectly hardened off. Most of these are quite easy to grow from seed, bulbs and corms, and you can top up to extend the range with a few special plants from garden centres. To add height to flower borders I can always find room for a few dahlias, chrysanthemums, Oriental lilies which have a strong exotic scent and even some gladioli.