Now that 2019 has passed and that very wet year is behind us we now look forward to 2020 hoping that a warmer and sunnier year is ahead. Yet again we seem to be having a mild winter, and half way through January the garden has not seen one snow flake. I always draw up a rough guide at the end of the last season of where the next crops are going in the following year so I can plan a rotation which I need so I can allocate garden compost to those crops that need the most. The peas, beans, onions, leeks, sweet corn, courgettes, pumpkins get a good helping, then the potatoes and brassicas also get some, but the root crops and salads are fine on land that was composted the previous year.

The first snowdrops are in flower and the aconites are not far behind. The wet December put a stop to the winter digging, but there were a few frosty days when it was ok to crack on with the digging, then
in early January the strong gales dried up the surface just enough to allow digging without mud sticking to the wellies. My compost heap got emptied and a new one started. I was pleased that the winter digging session got completed by the middle of January. Other allotment plot gardeners were all on site getting the land sorted, erecting greenhouses, repairing fences, sheds and installing bed systems to help organise the plots. Our communal shed was busy as you always need a break from the graft and there is always someone putting on the kettle. It was brilliant to be sitting outdoors for a coffee break on a warm January day.

The short day length limits time spent outdoors, but we can always find a few indoor tasks. This is a
great time to browse through new catalogues and see what new varieties of vegetables flowers and fruit we can try out. I try and get my seeds ordered by the end of January as some plants such as onions, broad beans and sweet peas get an early start. Last year the winter was so mild that my early seed sowing started in early February with onions and sweet peas, then I was taking chrysanthemum cuttings in mid February as there was plenty growth on the stools in my unheated greenhouse. I also started my begonias in mid February followed by broad beans and salads on a warm windowsill. February last year was so warm that I got my first early potatoes planted at the end of the month. That was a bonus as they were able to put on a lot of growth before the wet
summer blight appeared. This year my first early potatoes, Casa Blanca are being chitted beside a window in a cool but bright room, as the sprouts are already growing though they are still quite stocky. Time will tell whether I can again get planting done by the end of February.

In the past I had always grown some Cape Gooseberries outdoors in a sheltered spot, but after a few wet, cold and dreich summers when ripening of the fruit was a problem I gave up on them. However this year I will try them again as they are a lovely fruit when we get a decent summer.
Another plant from the past that will get planted is the Brugmansia, also known as Angels Trumpets as I just love the scent, and they make a great dot plant in a large tub with other summer bedding plants around it. This flower is pollinated by night flying moths so the best scent comes in the evening, so best to use it on patios where you often relax on a
warm summers evening.

The greenhouse got tidied up after the tomato plants had finished and old plants removed and the grapes harvested. Once they had lost their leaves in December the vines got spur pruned back to the upright cordons. The borders then all got some compost and a light dressing of fertiliser and I planted a few plants of lettuce Lollo Rossa and some spring onions. This will give us some fresh salads over winter, but as we go into early spring the greenhouse will again be bursting at the seams as young growing plants fight for space. 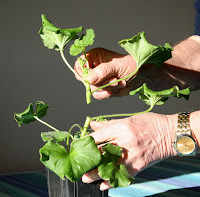 The Geraniums taken from autumn cuttings are now all rooted and beginning to put on growth. To
create short jointed plants grow them in a cool room with plenty light and remove any flowers as they appear. Also remove the tops to hold back growth and encourage a bushy plant.