A Year to Remember

A DIFFICULT YEAR ENDS
Looking back over 2010 I have to admit it has been an uphill struggle for many garden plants.
The year started with a winter to remember as we had not really had a decent winter for many years previous. As a painter of Scottish landscapes specializing in winter scenes I was always looking out for a good snow scene. Often I would rush out with my camera to capture as much as possible before it all melted by mid afternoon. Last winter there was so much snow that access to outdoor landscapes was severely limited due to blocked roads. 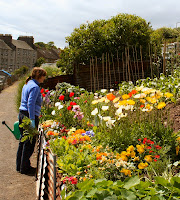 A mixed year depending on how tolerant plants were in a high rainfall year. Courgettes and pumpkins were excellent. No lanterns for us at Halloween, we need them for soup to last till next summer. I also save the seed every year as I have an excellent strain.
Onions were very poor with ripening up very difficult. Most other vegetable crops grew very well in our wet summer and now we still have excellent savoy cabbage Traviata, Sweet flavoured Brussels sprouts Wellington and plenty of Musselburgh Leeks. My beetroot still in the ground under a foot of snow is still perfect
The Greenhouse
There was just enough sun to ripen my grapes and my Black Hamburg has been very sweet. I look forward to 2011 and getting some grapes from my new white seedless vine Perlette.
Tomatoes ripened very late and quality was not up to usual standard, but maybe next year will be drier with more sun.
Plans are being considered to take a stand at both Gardening Scotland at Ingliston and the Dundee Flower and Food Festival next year as demand for my saskatoon plants and grape vines is still very strong.
Now let us get out that bottle of Glenfarclas and raise a toast in the hope that next year the laws of average will prevail and 2011 will be exceptionally warm and dry and my next packet of parsnip seeds will produce more than three plants.
Cheers !!!
End
Posted by John Stoa at 17:14