ORCHIDS AT HOME
Orchids came to Britain over a hundred years ago as plant explorers brought back new exotic plants from every continent to grow in Britain. They were very rare at first and difficult to grow but demand was huge as having orchids became a status symbol of the wealthy.  Collectors went in search of new orchids as imported plants could be auctioned for very high prices as orchidmania swept the country.
In my training years, orchids were quite rare as no-one had any and I did not know anyone who had them. I could only read about them in magazines and gardening books.
My first sight of an orchid was on a camping trip in the sixties up Glen Nevis. I saw this very unusual small flower spike at the side of the footpath. The plant had yellow spotted leaves just like I had seen in books. I was quite excited at discovering my first orchid, and although it may not have been very exotic, it was growing wild in Scotland. Further up the glen I was amazed to find more of them growing in massive drifts all over the place. Fortunately I had my Kodak Brownie with this new colour film so I could record my find. 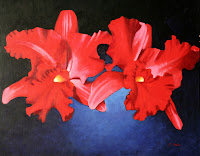 Many years later while working in Livingston I found that wild orchids are quite common and enjoy boggy land in areas of high rainfall. A lot of Livingston was built on peat boglands. I had been asked to estimate a price for weed control around this new factory where weeds had started to encroach into the paved areas. I couldn’t believe what I found, as it was my spotted orchid trying hard to survive after someone had planted an industrial estate on its natural habitat. There were hundreds of them, and all in full flower. It was a beautiful sight, though soon to be very short lived. A team of men in white suits and face masks arrived with sprayers as nothing could stop progress.
Have they no soul!!!
Today the mystery of orchids has somewhat disappeared as easy to grow types, e.g. phalaenopsis and Cymbidiums are now available in every garden centre and books abound with stories and growing instructions for the beginner.
Habitat
Orchids grow in almost every country around the world so there is tremendous variety. Breeders can enhance species and hybrids to produce plants suited to domestic cultivation and environments.
There are many types native to UK, though these grow in the ground preferring damp areas and boggy ground though they often grow on banks above wet areas so the roots are not in standing water. These types are known as terrestrial but the common ones we see flowering in garden centres are mostly epiphytic in origin.
These do not grow in soil, but cling to tree trunks and branches in tropical forests where there is high humidity. They have clinging roots which hold the plant in place and aerial roots which hang below the plant and absorb moisture from the air as the root surface has a blotting paper ability.
They do not draw on their host plant for nutrients but are happy with nutrients washed down in bird droppings, rainwater with atmospheric nitrogen and small amounts of leafmould produced by natural falling leaves.
The woodland canopy, mostly evergreen, affords dappled light and protection from strong sunlight. As orchids come from all over the world there are those that are happy with our temperatures and others that need a bit more warmth.
Culture
When you purchase your first orchid I would always recommend starting with one of the easier ones such as the Phalaenopsis which are usually quite reliable and very rewarding when it repeats the flowering every year. They will come in pots with ample holes for drainage and planted in special orchid compost. This is often a mixture of bark chips, coarse graded peat, charcoal to keep the mixture sweet, nutrients and trace elements. This should be sufficient to keep the plant happy for two to four years before repotting is necessary depending on type. It is best to repot in spring as growth commences. 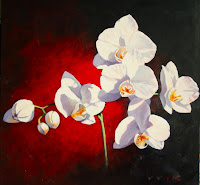 Plants can continue in flower for a few weeks, then occasionally some may send up another flower spike from lower down on the existing spike. Once flowering is over allow the plant some dormancy. Keep it in a cooler spot, and water less often, but do not let it dry out. Do not feed at this stage or repot. Never leave the plant in standing water as they all require free draining compost.
Place the plants in a well lit room, but out of any direct sunlight. I have a strong white phalaenopsis that just loves our bright bathroom where daily showers provide it with high humidity. If growing it in a living room, give the occasional light spray to the leaves and wipe off any dust.
Orchids are not heavy feeders so just give them an orchid feed once every two to four weeks while they are growing.
Orchids have thick leathery leaves that are not too troubled with pests or diseases.
Propagation
It is often easier to buy new plants rather than propagate from an existing plant. Commercially many orchids are produced by specialist growers using meristem culture producing many plants in selected clones.
Orchids may grow as a single stem from a rhizome and sometimes produce basal offshoots that can be separated for growing on once they have produced their own roots. Others that produce many pseudobulbs, or swollen stems, or just many flat stems may be split up and repotted. Sometimes it is difficult to get them out of their pots as the roots cling onto the insides of the pot. Before potting up, remove any broken, diseased or dead roots, and make sure there is plenty of drainage in the bottom of the pot before adding orchid compost. Repot into the nearest size for the plant as they prefer to be rootbound before they settle down to flower. Do not put the aerial roots into the pot when potting up.
Although orchids may produce seed, it is not easy to grow as each type requires a symbiotic relationship with its own species of mycorrhiza. Breeders use a special growth medium in sterile flasks for their seeds then bulk up using meristem culture.
Phalaenopsis
These have been extensively bred and crossed and are now available in many colours. Although they are fairly easy to grow they enjoy plenty of warmth and in winter can take direct sunlight for a few months, but keep them shaded from spring onwards.
They can flower most of the year with six or up to twenty or more flowers on one spike. Keep the stem staked otherwise it hangs over and could pull over the whole plant. They are very popular as cut flower in North America.
Cymbidiums
Cymbidiums are very popular and another good one to start with as they are very adaptable. They flower in autumn to spring producing many spikes with up to twenty flowers each lasting up to ten weeks. The plants can grow quite large and are happy in a cool room. They require more frequent repotting because of their strong growth. Again, these are excellent for long lasting cut flower. 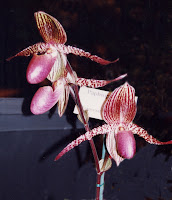 Paphiopedilums
These orchids are terrestrial, not epiphytic so there are no aerial roots or pseudobulbs. They grow from rhizomes just below ground level and produce medium sized flower stems with just one or a few flowers. They like to be kept lightly shaded. Propagate by division in spring and repot every second year in the smallest pot available.
Cattleyas
These epiphytes are very flamboyant with large colourful flowers which are often highly perfumed.
There are many orchid societies throughout Scotland and the UK and every year the World Orchid Congress puts on a fantastic show. This year it is in Singapore on 14 to 23 November 2011.
End
Posted by John Stoa at 16:37