WINTER PROPAGATION
This winter season may be severe and prolonged and all outdoor plants are well and truly dormant, but gardening is very seasonal and whilst it may not be possible to do much soil cultivations, there are many tasks that can be started now.
A lot of trees, shrubs, roses, fruit bushes and ground cover plants get pruned during the dormant season and it is these prunings that can make perfect cuttings when you wish to increase your stock of plants.
This is also the time to start sowing onions, and sweet peas if they were not autumn sown. If you have a good selection of geraniums and Impatiens which you wish to retain and have taken cuttings in autumn these will now be rooted and in need of potting up. I have kept the same geraniums going for many years as I have got really good colours for a brilliant summer display.
It is always very satisfying to produce your own healthy strong plants from seed and cuttings, rather than buy the more expensive mature plants. When training to be a gardener in the Parks Department in the early sixties the competitive spirit was always very strong and there was always someone who had bigger plants, more of them or had more flowers than the next. Propagation of all plants was a mark of your skills. Rose budding at the Camperdown  nursery sorted out the men from the boys as a high percentage take, speed of budding and clean grafting were closely monitored. 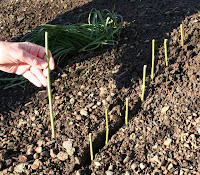 Although there is not a lot of fruit and vegetables grown in the parks, you were expected to acquire gardening skills in all topics, so training covered vegetables, fruit and greenhouse work as well as planting trees, shrubs, roses and bedding plants, grass cutting and landscaping.
It was at Duntrune Terrace demonstration gardens that I got my propagation skills honed under the watchful eye of a very skilled head gardener. My first home grown fruit bushes started off from cuttings grown from the gardens own stock of the best black currant varieties.
It was all part of the training exercise of course.
Hardwood Cuttings Fruit
Black currants, red and white currants and gooseberries are all propagated similarly as mature one year old shoots about pencil thickness. Cut them to about six to eight inches long with the lower cut under a node and the top cut above a bud. Leave all the buds on unless you wish to grow them as cordons or on a bare stem as with gooseberries. For these remove all the buds except the top two or three. Gooseberries are best on a leg to help picking as the weight of crop often pulls the branches down to the ground where the fruit gets splashed with soil.
Insert the cuttings about four inches apart in open ground in rows, leaving about one third of the cutting above ground. Leave them to grow on for a year before lifting them in the dormant season to go to their permanent spot.
If you are planting a new row of blackcurrants, you will only need to buy half the required number, as it is necessary to prune a new bush down to a few buds to get it established. Each new bush will normally have about four stems which after pruning will give you four good cuttings. Plant all four cuttings together in a square about four inches apart in the place of another bush.
After three years you will not see any difference in size of the bushes.
Hardwood Cuttings Ornamental Shrubs
There is a wide range of ornamental trees, shrubs and roses that can be propagated from cuttings very similar to black currants.
Poplar and willow trees must be the easiest and you should achieve 100% rooting almost every time. Take one year old shoots and cut to about ten inches long and insert into rows four inches apart leaving a third above ground.
Cornus, philadelphus, forsythia, buddleia and most roses can be propagated as above, but other ornamentals may need a wee bit more care.
Often the best time to take these hardwood cuttings is either two weeks before or after leaf fall or in March just before dormancy breaks.
Cuttings are taken about six to eight inches long, and some, e.g. pyracantha are better with a heel. Prepare a bed in a cold frame or other sunny sheltered spot mixing a lot of grit and some old compost into the soil to open it up, improve drainage but still retain moisture. Cuttings are lined out about four inches apart in rows six inches apart.
Commercially cuttings are often bundled up in batches of about twenty then plunged into an open frame full of sand or grit with soil warming cables underneath in late autumn. This gives cool tops so nothing breaks into growth, but the bottom heat encourages the base of the cutting to form a callus. The bundles are checked regularly, and then as soon as roots are seen to break out of the callus, they are lined out in another frame in ordinary propagation medium.
Allow all the rooted cuttings to grow on for a year before lifting, keeping them watered, and in summer protect them from strong sunshine.
For those with less sophistication it is possible to use deep boxes filled with a mixture of sand and old potting compost to take the cuttings in smaller bundles and sink it onto the top of a fresh compost heap where there is still some heat. Leave them there till mid March then line them out, when they will have callused over and some may show root initials.
The yellow flowered Jasmine is very easy to grow as long stems often fall onto the ground where they will root very readily. Hydrangea petiolaris also roots itself into soil and moist walls at every opportunity.
Stratification
Many shrubs, e.g. cotoneaster, pyracantha, rowans, and saskatoons grown for their ornamental or edible berries can be propagated from seeds extracted from these berries.
Once the berries are mature remove them and squeeze out the seeds. Wash any remaining pulp off the seeds as it contains germination inhibiting hormones, then either store them for a few weeks in a fridge, or sow them in trays and keep them outdoors. Keep them watered and protected from birds and mice. Over winter them outdoors, then in spring you should get a good germination of young plants. Grow them on for another year in soil or pot them up individually.
Greenhouse plants 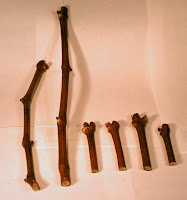 Grape vines are very easy to root. I take pruned shoots about twelve inches long in January and over winter them in bundles in my compost heap. In March I cut all the plump healthy stems into one bud cuttings. Cut each one above a bud and leave two or three inches of stem below that bud. These can be inserted individually in pots, or spaced out in a cellular tray and kept in the greenhouse. By mid summer they will be rooted and ready to pot into a bigger pot. Once well rooted they can grow very strongly and as they are quite hardy grow them outdoors all summer and autumn.
Geraniums that were started off as cuttings last October are now rooted. They were inserted in wide shallow pots at five to a pot, but they soon filled the pot. I take out the tops to make them branch and let light into the middle otherwise at this time of year they would get very leggy. 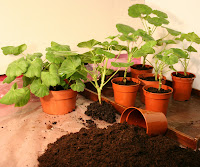 They are now branching very nicely so potting them up into an individual pot and giving them more space will keep them short jointed.
I try to keep my greenhouse unheated as it is better for my overwintering grape vines, but it is too cold for geraniums. They can take a few degrees of frost, but not over a long period, so I keep mine on the windowsills in the house until March when I feel it will be ok to give them cold greenhouse conditions.
If a late frost threatens I do have a heater I can use for a short period.
Sweet peas can now be sown any time in January or February if they were not autumn sown. Last year they were autumn sown then overwintered in my cold greenhouse. That allowed me to plant them out early, but unfortunately this was followed by a cold wet spring and an even wetter summer so the display was miserable. This year I am not sowing too early. The seeds are soaked over night in a glass of water, then sown the following day at three seeds to a pot and germinated in my studio. Soon after they emerge they will be hardened off before going into the cold greenhouse. They should be ready for planting in early April on a good day.
End
Posted by John Stoa at 11:16